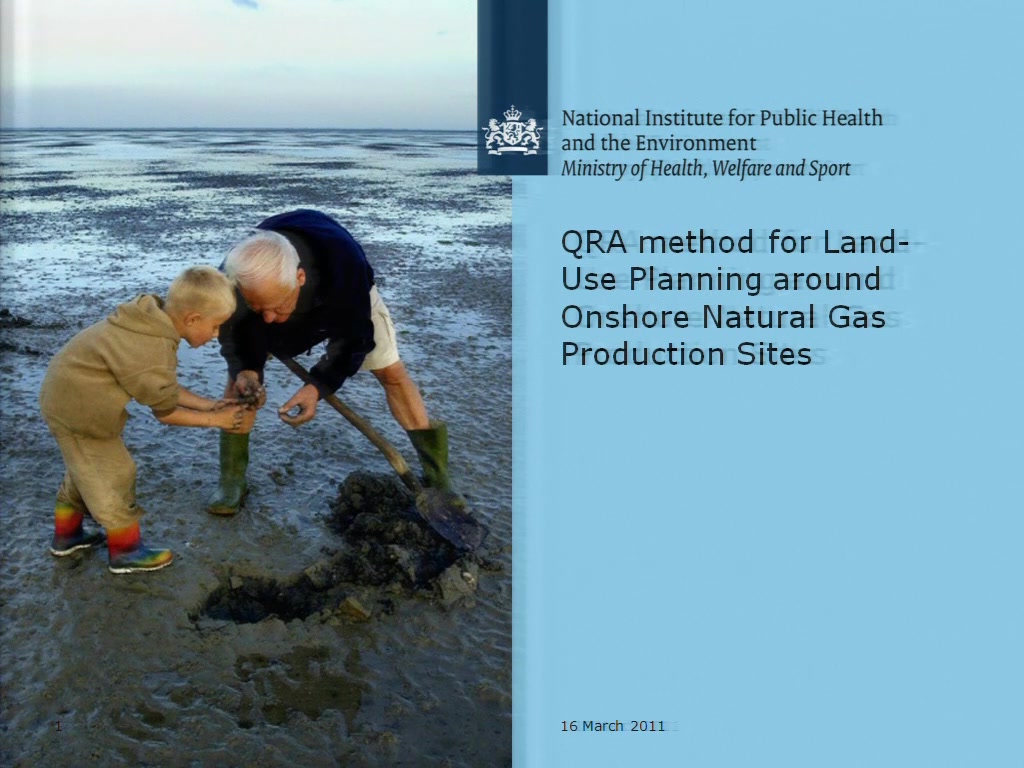 In the Dutch legislative context, facilities that handle or store large amounts of hazardous substances must carry out a quantitative risk analysis (QRA) for land-use planning purposes. The outcomes of the QRA determine the kinds of activities that are tolerable in the surroundings of the facility. A guideline is already in place for the risks generated by chemical industries. The current paper deals with risks that are generated by on-shore oil and gas facilities. The activities involve well drilling, completion and maintenance of the well, production and injection, separation, drying, cleaning, heating, cooling and mixing of products and (de)compression. The quantitative risk assessment includes the identification of release scenarios, the associated probabilities and the calculation of the consequences of each identified scenario.

The project was carried out by NOGEPA (Netherlands Oil and Gas Exploitation and Production Association) and RIVM (Dutch National Institute for Public Health and the Environment) and was supervised by the ministries of VROM (Housing, Spatial Planning and Environment) and EZ (Economic Affairs).

In The Netherlands legislation is in place that obliges facilities that handle or store large amounts of hazardous substances to perform a quantitative risk analysis for land-use planning purposes [i]. This involves chemical industries, rail marshalling yards, pesticide storages and LPG fueling stations. It is intended to include on-shore oil and gas facilities, such as production sites and gas treatment sites, in this legislation in 2011. As a result, the current methodology, known as the ?Reference Manual for Bevi Risk Assessments'[ii] (hereafter ?QRA manual'), must be extended with a methodology for on-shore oil and gas facilities. This updated QRA manual will be published in Q1 2012.

In The Netherlands, off-side risk is expressed with two indicators: individual risk (IR) and societal risk (SR). IR is used to determine a zone where the presence of structures such as nearby industries, houses and schools is undesirable or unacceptable. SR is used to determine whether the remaining risk level, related to the acceptable structures in the inner zone and to all structures outside the inner zone, is tolerable.

The use of QRA outcomes for public decision making for current and future land use requires a methodology that is transparent and robust. The stakeholders must be able to verify the method and therefore only generally accessible data can be used for the derivation of release frequencies and for consequence calculations. The outcomes of the QRA should not depend on subjective choices of risk analysts or differences in software models. Therefore, the method to carry out a QRA is prescribed by legislation, including the prescribed use of the software tool Safeti-NLâ. In order to achieve coherence, the QRA method for oil and gas facilities should follow the method for general chemical industries where possible.

Only a limited number of activities takes place at the facilities under consideration (see Table 1). Most activities are deemed relevant for the risk assessment. Only the fuel gas system, the venting system and the drainage system do not have to be included in the QRA.

As mentioned, coherence with the current method for general chemical industries was a prerequisite. Therefore, most attention was paid to activities and equipment types that are specific for the gas and oil facilities. Table 2 gives an oversight of the equipment types for which scenarios and frequencies have been either newly defined or copied from the existing framework.

For well related activities two release scenarios are defined, namely a well blow-out and a leak from the well. A well blow-out is defined as a release from a well that is not stopped by the blowout preventor and has a release rate similar to a tubing blowout. A leak is defined as a release from a hole with a diameter equivalent to 10% of the diameter of the production tubing. The SINTEF database as reported by Scandpower [iii] was the main source for the derivation of frequencies. This database distinguishes between various types of well activities (drilling, completion, production, various types of maintenance).

For pipelines two release scenarios are defined, namely a full bore rupture of the pipeline and a leak with an equivalent diameter of 10% of the internal diameter of the pipe. The frequencies for pressurized gas pipelines were updated because the frequencies currently used for general chemical industries were not considered to be appropriate. This claim was confirmed by recent work, in which the UK Health and Safety Executive (HSE) and the French INERIS were also involved [iv]. This has resulted in an update of the frequencies to be used.

For compressors two release scenarios are currently defined, namely the catastrophic rupture of the compressor and a leak with an equivalent diameter of 10% of the internal diameter of the feed line. As with the pipelines, the current frequencies used in the QRA manual were not considered to be appropriate for the high integrity compressors that are used for natural gas production and distribution. As a result, a literature and database investigation was carried out under supervision of RIVM and the frequencies were updated [v].

The release scenarios and frequencies for slug catchers were investigated in 2008. The conclusion was that no reliable data for major accidents with slug catchers could be found in literature or databases. As a result of the lack of data, it was decided to use Dutch data for the failure of pressurized vessels with minor modifications.

All other data were taken from the QRA guideline [ii].

The exact frequencies for each distinguished release scenario will be reported in the extended paper.

As prescribed by current Dutch legislation, consequences need to be calculated with Safeti-NLâ from DNV. This is a modification of the widely used DNV product Phast Riskâ. In order to verify the reliability of the outcomes, the results obtained with Safeti-NL were compared with results from the more specific, confidential, software tools FREDâ (oil and gas) and PIPESAFEâ (gas). In general, the observed differences in consequence distances were between 10 and 20%. For extraordinary cases, the differences may be 40%. The outcomes of FREDâ and PIPESAFEâ can however not be used, as they are not publicly available.

A method was defined to calculate the off-site risk resulting from activities at oil and gas facilities such as production sites and oil and gas treatment sites. Where necessary, the scenario identification and frequency estimation were updated. Consequence calculations can only be improved if confidential models be made publicly available.

Preview Presentation:
Presenter(s):
Eelke S. Kooi
Once the content has been viewed and you have attested to it, you will be able to download and print a certificate for PDH credits. If you have already viewed this content, please click here to login.