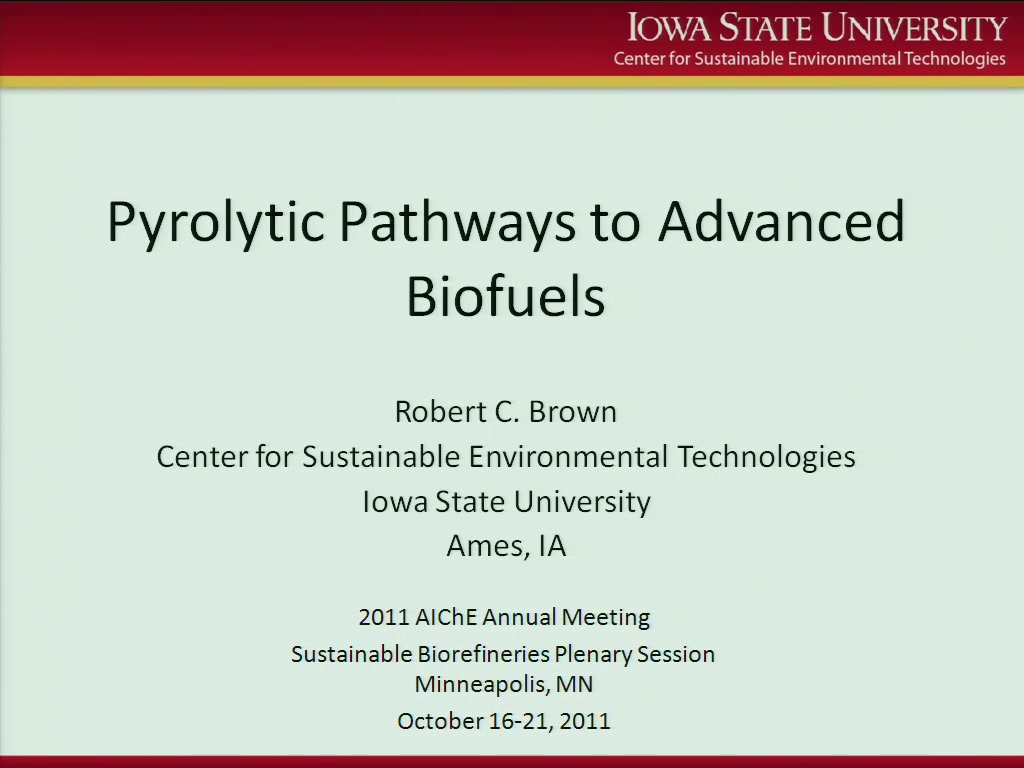 Pyrolysis is the thermal conversion of carbonaceous materials in the absence of molecular oxygen to liquids, solids and gases. In the most general sense, pyrolysis can occur in an inert or reducing atmosphere or within a solvent (including water); it can occur at atmospheric or elevated pressure; heating rates can be as slow as hours or as fast as seconds; and it can occur in the presence or absence of catalysts. Much of the attention has focused on fast pyrolysis, which produces liquid (bio-oil) as the major product (75 wt%). Bio-oil is a mixture of water and oxygenated organic compounds that can be upgraded to synthetic gasoline and diesel fuel. However, prominent shortcomings of bio-oil, including poor stability and corrosiveness, have encouraged investigations of other kinds of pyrolysis for the production of hydrocarbon fuels, including catalytic pyrolysis; hydropyrolysis (pyrolysis in presence of hydrogen); and solvent liquefaction (pyrolysis in the presence of a solvent). The goal of these alternative approaches to conventional fast pyrolysis is to produce more less oxygenated molecules, which will improve stability and suitability of the resulting “renewable crude” as refinery feedstock.

Traditional fast pyrolysis produces bio-oil containing hundreds of compounds dominated by small oxygenates arising from the decomposition of cellulose and hemicellulose and large phenolic oligomers derived from lignin (so-called pyrolytic lignin). Neither the light ends nor the heavy ends are particularly well suited for efficient upgrading of bio-oil to hydrocarbon fuels. Deoxygenation of the light ends produces many hydrocarbons that are too volatile for liquid fuels. Cracking of the viscous heavy ends often results in unacceptable levels of coking. The result is relatively low yields of fuel range hydrocarbons.

Fundamental investigations of fast pyrolysis suggest an alternative approach to traditional fast pyrolysis that replaces random decomposition reactions with selective pyrolytic depolymerization reactions. This concept is based on the observation that pure cellulose (that is, cellulose free of inorganic compounds) readily depolymerizes to levoglucosan, a monomeric anhydrosugars; pure hemicellulose pyrolyzes to anhydro and di-anhydro sugars; and lignin depolymerizes to phenolic monomers. If reaction conditions are not carefully controlled, other primary reactions and subsequent secondary reactions will diminish the yields of desirable monomers. Nevertheless, fundamental studies suggest that sugars, acetate, and phenolic monomers could be the major products of pyrolysis, representing new opportunities for producing fuels and chemicals from these so-called thermochemical intermediates.

As envisioned, selective pyrolytic depolymerization would employ a chemical pretreatment of the biomass feedstock prior to pyrolysis to favor the production of sugar or dehydrated sugar from cellulose and hemicellulose. Control of downstream processes would discourage repolymerization of phenolic monomers derived from lignin. These carbohydrate and lignin-derived monomers can serve as either feedstocks for chemical synthesis or as refinery feedstocks for the production of synthetic gasoline and diesel fuel. Whether these “pyrolytic sugars” would better be fermented or catalytically upgraded will depend upon the kinds and amounts of reaction inhibitors they contain and the price of hydrogen needed to upgrade the oxygenated monomers to hydrocarbons. Similarly, the acetate either can be steam reformed to hydrogen or heterophically fermented to lipids by microalgae. The monomeric phenols are readily upgraded to aromatic hydrocarbons or they can be used for the production of phenol resins.

Preview Presentation:
Presenter(s):
R. C. Brown
Once the content has been viewed and you have attested to it, you will be able to download and print a certificate for PDH credits. If you have already viewed this content, please click here to login.