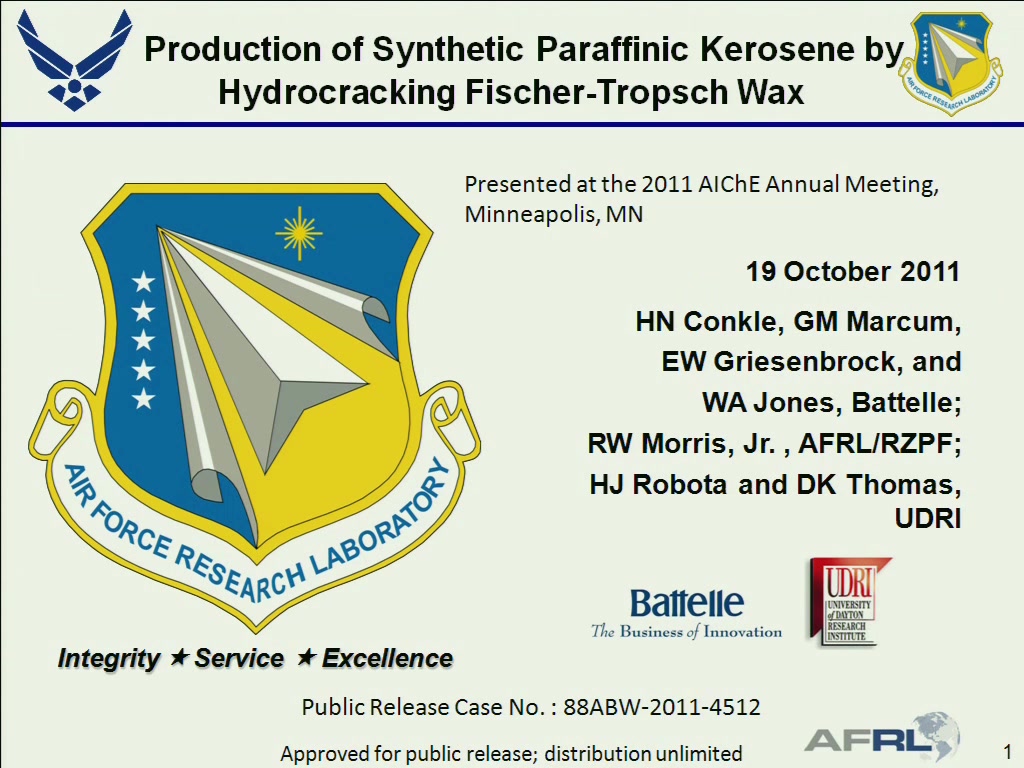 The US Air Force has committed to an alternative aviation-fuel initiative to implement a roadmap for testing and certifying alternative fuel components including biomass-derived alternatives produced from non-food plants, animal fats, and algae, as well as synthetic fuel components derived from domestic coal and natural gas.  The initiative includes the certification of fuel blends for the entire fleet of USAF aircraft as well as ground support equipment and vehicles. The Impact of these new fuel blends on performance, the environment, safety and occupational health, and the fuel storage and supply infrastructure are being examined.

In order to qualify fuel components, the AF requires amounts ranging from initial samples of 20-30 mL to larger scale quantities in the hundreds to thousands of gallons for test operations both in the laboratory and in engines and aircraft.

The characteristics of petroleum-based jet fuels as well as coal and natural gas based synthetic jet fuels are well known. They contain hydrocarbon compounds that form a bell-shaped distribution that ranges from a carbon number of 8 to 16. In contrast, the fuel properties of biobased components are less well defined, and depending on the generation process, may contain narrower carbon-number distributions. A way to generate such specialized fuel surrogates is needed to determine the effect of these new fuel components on combustion efficiency, emissions, and fit-for-purpose performance.  To generate these surrogates, the Air Force has erected a Sample Preparation Unit (SPU) at the Assured Aerospace Fuels Research Facility (AAFRF) located at Wright-Patterson Air Force Base.

For acceptance tests the SPU was configured to hydrocrack Fischer-Tropsch wax into synthetic paraffinic kerosene. The SPU was operated 24/7 at a production rate of approximately 10 gallons of synthetic jet fuel materials per day.  The fuel surrogate produced met all the specifications of SPK aviation turbine fuel (MIL-DTL-83133G) except conductivity (which could be met through use of an additive).

Preview Presentation:
Presenter(s):
H. Nicholas Conkle
Once the content has been viewed and you have attested to it, you will be able to download and print a certificate for PDH credits. If you have already viewed this content, please click here to login.