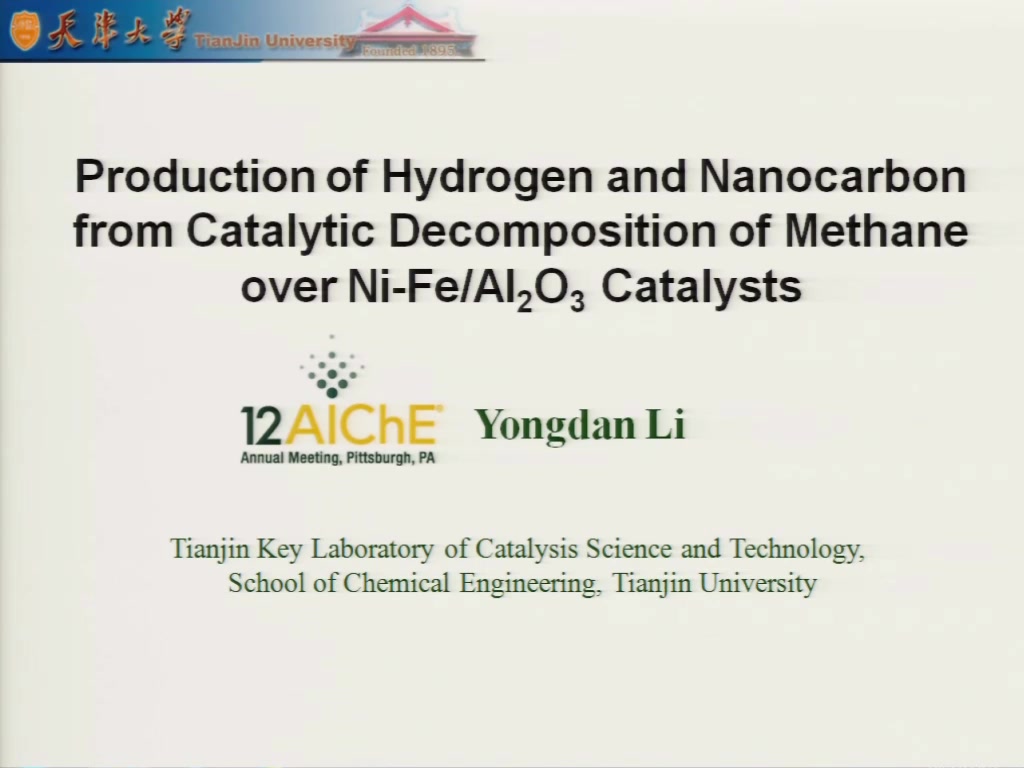 Methane catalytic decomposition reaction (MCD) has received much attention in recent years as a potential route for the direct production of COx (CO/CO2)-free hydrogen because of its environmentally benign, energy efficient and process simple characteristics, which produces an especially suitable feed for low temperature hydrogen fuel cells, e.g. proton exchange membrane fuel cells (PEMFC) and alkaline fuel cells. Besides of generating COx-free hydrogen, MCD produces valuable carbon nanotubes (CNTs) and nanoﬁbers (CNTs) with great application potentials. The catalysts used for MCD are usually group 8-10 transition metals, such as Ni, Fe and Co. The co-precipitated nickel-based catalysts are very active and stable at low temperatures (e.g. 773-873 K). MCD is endothermic and high reaction temperature is advantageous for obtaining high concentration hydrogen. However, the durability of the Ni/Al2O3 catalyst declines swiftly with the increase of the reaction temperature. To improve its durability and delay its deactivation at expected reaction temperatures, the third component, such as metals, or oxides were introduced.

In this work, the influence of the doping of iron to co-precipitated Ni-Al catalysts on the stability and activity of the reaction was investigated. The mixed oxide was prepared from the precursor which possesses a well-crystallized hydrotalcite-like anionic clay structure. In the mixed metal oxides obtained from calcination of the co-precipitated precursors, NiO phase dominates and the iron oxide is uniformly dispersed in NiO phase. The constant temperature reaction result indicates that the addition of iron enhances the stability of the Ni/Al2O3 catalyst greatly. Since the diffusion coefficient of carbon atoms through iron metal is three orders of magnitude higher than that through nickel metal. Modification of the catalyst with doping iron increases the carbon diffusion rate thus enhances the stability of the catalyst at high temperatures. The carbon yield of the prepared Ni-Fe/Al2O3 catalyst (mole ratio of Ni-Fe-Al=2:1:1) at 923 K was 851.3 g C/ g cat which is the highest yield in the literature reported and the reaction lasted more than 200 h. This work provides a new catalyst which is extremely stable for MCD reaction and is promising for the H2 production for PEMFC.

Preview Presentation:
Presenter(s):
Yongdan Li
Once the content has been viewed and you have attested to it, you will be able to download and print a certificate for PDH credits. If you have already viewed this content, please click here to login.

Mitigation of Preheat Fouling by Eliminating the Cause
Today, there is no excuse for not getting five years or more on the run length of refinery preheat exchangers without the need for cleaning. Among the many...
Enhanced NOAA Chemical Reactivity Worksheet for Determining Chemical Compatibility
Chemical compatibility is a key consideration throughout the chemical industry wherever two or more chemicals have the potential to mix, either inadvertently...