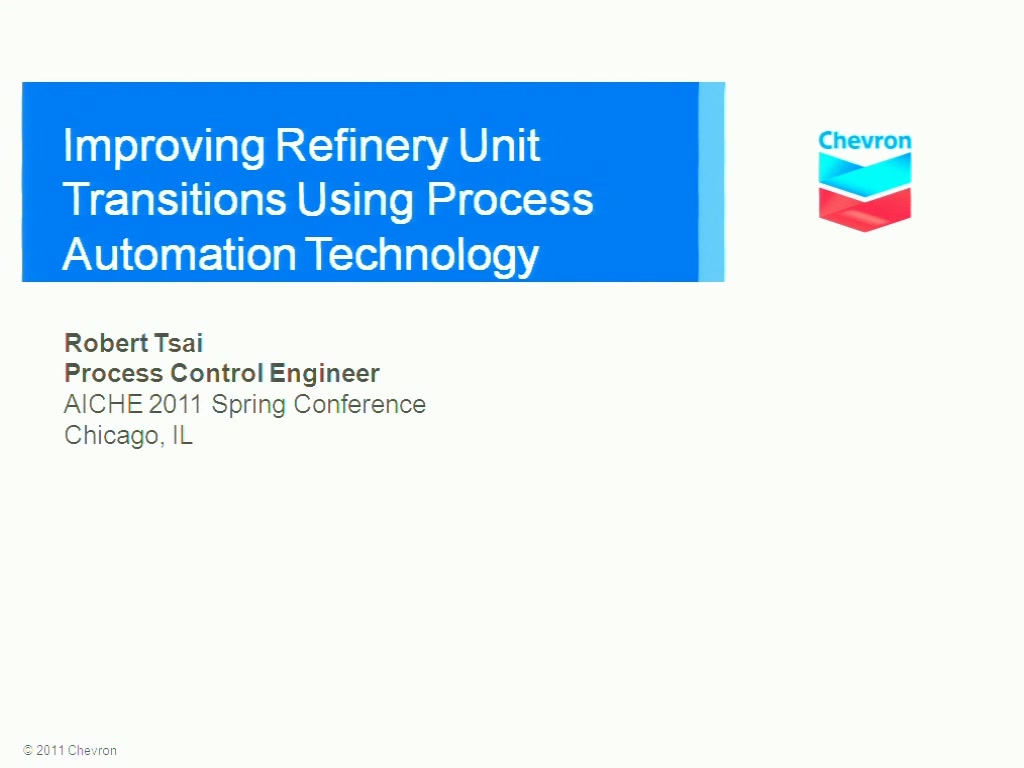 Process Automation ideas and technologies have been used sporadically for decades. However, in US refineries, automation technologies are still relatively rare. Critics of the technology will often point to complexity, high upkeep, and difficulty in changing the status quo as stumbling blocks to new automation installations. Furthermore, hard dollar benefits from increased reliability and knowledge capture can be difficult to quantify in a complex system. It frequently takes many cycles of running the automation application, debugging it, and running it again to achieve the desired results. Often, operating companies abandon their automation initiatives as failures due to the time required to execute these commissioning cycles.

Recently, Chevron has had success with an automation initiative in a number of its facilities. This automation initiative deployed an application that uses simple graphical ladder logic to configure complex programs that are transparent to the operator. Problems that have hounded traditional programs such as lengthy debugging, and complexity in running multiple parallel routines, are built inherently into the application. These capabilities, and others, allow for new, complex applications to be built from scratch in a matter of months with reduced training requirements and fewer commissioning cycles.

This paper will present an application that was deployed in a Base Oil Hydrocracking unit recently to close an advanced process control gap. This unit operates on a feed wheel with frequent feed changes that requires much of the plant reaction and distillation sections to be adjusted. Every operator would perform this transition slightly differently, resulting in varying transition times. We have demonstrated as a primary benefit that the automation application operates comparably to the “best operator”, resulting in a 30% faster transition on average with increased product yields during the transition without sacrificing safety and honoring all plant limits.

This paper will go into more detail on the benefits achieved using automation on the Hydroprocessing facility mentioned above and others facilities as well. Several drawbacks inherent to all automation opportunities such as malfunctioning equipment, lack of basic regulatory control, and lack of program flexibility will be discussed as well.

Preview Presentation:
Presenter(s):
Robert M. Tsai
Once the content has been viewed and you have attested to it, you will be able to download and print a certificate for PDH credits. If you have already viewed this content, please click here to login.

Democratizing Fossil Fuel Conversion
Do you have a billion dollars? Neither do most of the 6 million companies in the Unites States. In fact, less than 10 companies in the U.S. can reasonably...
A Multi-Level Simulation Approach for the Crude Oil Loading/Unloading Scheduling Problem
Modern refining has become an extremely competitive business due to the deteriorating quality of crude oil coupled with tighter product specifications and more...