Power Production through an Ammonia Based Combined Cycle 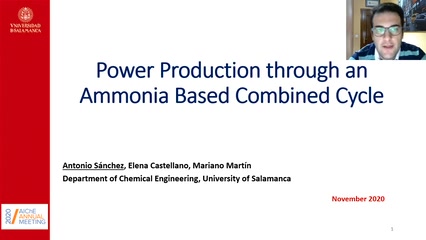 The share of renewable energies in the power generation system has been increasing during the last years due to the new concerns in sustainability. Around 26% of the total power generation come from renewables worldwide. However, the share of renewables increases up to more than 60% in countries such as Denmark, New Zeeland or Norway. Hydropower, solar and wind are the three main renewable resources in the world. The increase in the use of intermittent energies, mainly wind and solar, require the implementation of energy storage to be able to meet the power demand regardless of the availability of wind or solar energy. Different ways to storage power have been proposed (Gür, 2018). The different storage alternatives present different energy densities, storage range or discharge time. Therefore, a combination of the different alternatives could be necessary to meet all the requirements of the power grid. Pumped-hydro could be one of the most implemented nowadays, however, a limited capacity expansion is expected. A wide range of batteries is being used for storing at small scale and the grid integration is being studied. The use of chemicals is attracting attention to storage energy in a long-term horizon and the possibility of transporting the chemicals to distribute the energy in different areas. However, further studies about the integration of the chemical with the renewables and their use to produce power must be conducted.

Different chemicals have been proposed as energy carriers. Hydrogen is one of the most extended due to its high energy density. However, its storage is difficult and expensive. Therefore, alternative chemicals have been proposed as hydrogen resources. Methanol or dimethyl ether (DME) has been used combining carbon dioxide and hydrogen. Ammonia is also attracting attention due to the possibility of producing it using hydrogen and nitrogen. Consequently, ammonia is a carbon free energy carrier. There are two main steps to use ammonia as an energy carrier: production using renewable power and its transformation into power. In previous works, the production of ammonia using renewables energies and raw materials have been studied using a process design perspective (Sánchez & Martín, 2018). Different alternatives have been proposed to generate power using ammonia. Three are the main ones (Valera-Medina et al., 2018): fuel cell using ammonia, ammonia cracking to produce hydrogen and, then, a hydrogen fuel cell and, finally, the ammonia combustion.

In this work, the ammonia transformation into power have been studied. The evaluation of the combustion way has been carried out. According to previous experimental works, the combustion of only ammonia is difficult and different mixture of ammonia with methane or hydrogen have been proposed. Therefore, a mixture of ammonia and hydrogen has been used in this work (Otomo et al., 2018). The hydrogen is produced from ammonia through cracking. Then, the mixture of hydrogen and ammonia is introduced in the combustion chamber to produce energy. A combined cycle is set up to obtain the power. The first stage is the gas turbine. Then, the Rankine cycle is introduced. Three turbines which different pressure are used in this cycle. The outlet gases are treated to meet the legislation about emissions (mainly nitrogen oxides) and to recover the valued products in the outlet stream. An equation based approach have been used to optimize the operating conditions of this process to produce power from renewable ammonia (temperature, pressure, ratios...).

Sánchez, A., Martín, M., 2018. Scale up and scale down issues of renewable ammonia plants: Towards modular design. Sustainable Production and Consumption, 16, 176-192.

Preview Presentation:
Presenter(s):
Elena Castellano
Mariano Martin
Antonio Sanchez
Once the content has been viewed and you have attested to it, you will be able to download and print a certificate for PDH credits. If you have already viewed this content, please click here to login.

Dynamic Modeling and Application of Model Predictive Control to the Cool-Down Process of a Liquefied Natural Gas (LNG) Tank
Liquefied natural gas (LNG) is a natural gas which is liquefied below its boiling point (-160 C) and has been widely adopted as an alternative to conventional...
The Design and Revamp of Cooling Water Networks
Cooling Water Networks G.T.Polley , M.Picon Nunez & E.Tamakloe Dept. of Chemical Engineering, University of Guanajuato, Mexico In Reality: Simulations can...