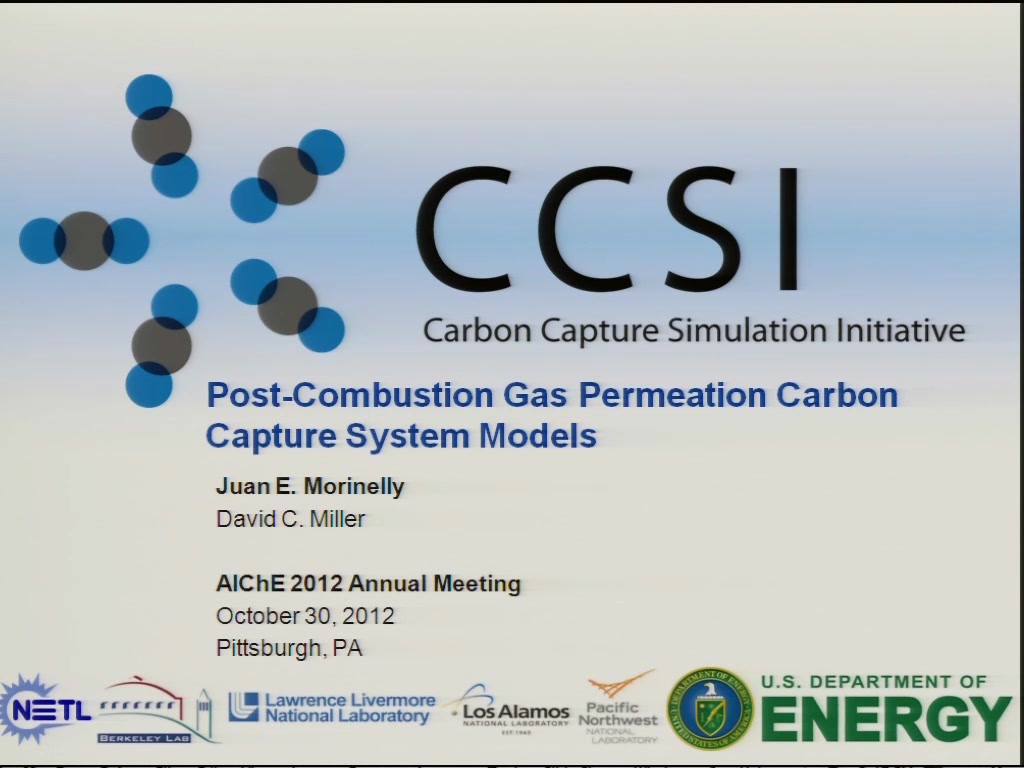 Gas permeation membranes have been proposed as an alternative to amine absorption for post-combustion carbon capture [1,2]. Industrial-scale membrane systems have been successfully applied in natural gas sweetening, and their use in other separations is expected to grow in the near future [3]. Under the constraints imposed by the performance limits of state-of-the-art gas permeation membranes multi-stage processes are required to obtain a high purity CO2 stream suitable for sequestration. An effective design for such a process entails balancing of numerous factors, including the pressure ratio across the membrane stages, which affects the parasitic power load, and the size of the membrane modules, which affects the capital cost. Merkel et al. (2010) introduced a multi-stage process that incorporates permeate recirculation, the use of the boiler's air feed as sweep, compression of the feed, and pulling vacuum on the permeate side. The main challenge from a modeling perspective is that, unlike conventional CO2 capture processes, this is not a purely ?end of pipe' process. The proposed process is integrated with other parts of the power plant. A modeling strategy that captures undesired effects such as higher flows due to the recirculation of gases is required in order to accurately evaluate its performance.

Two steady-state process models were built in Aspen Custom Modeler® (ACM) based on the work by Merkel et al. (2010) and Toy et al. (2011). These models include modules for the boiler, air pre-heater, and FGD units that can be tuned to a given pulverized coal (PC) power plant system. A one-dimensional, multi-component, distributed model was developed for the membrane stages within the process models. This device-scale gas permeation model incorporates pressure drop effects and can be adjusted to varying dimensions for the module as well as membrane properties. The process models are linked to a simulation interface that allows the optimization of key process parameters with respect to system-level functions such as the cost of electricity (COE). In addition to a description of the process models and their features, this presentation will describe the results of varying levels of membrane properties. The base power plant in this analysis is a supercritical PC with a net output of 650 MWe before the capture and compression systems are integrated. Constraints on the capture level (>90%), the purity of the sequestration stream (>95%), and the increase in flow of the flue gas stream out of the boiler (<15%) were included in the optimization routine.

Preview Presentation:
Presenter(s):
Juan E. Morinelly
Once the content has been viewed and you have attested to it, you will be able to download and print a certificate for PDH credits. If you have already viewed this content, please click here to login.