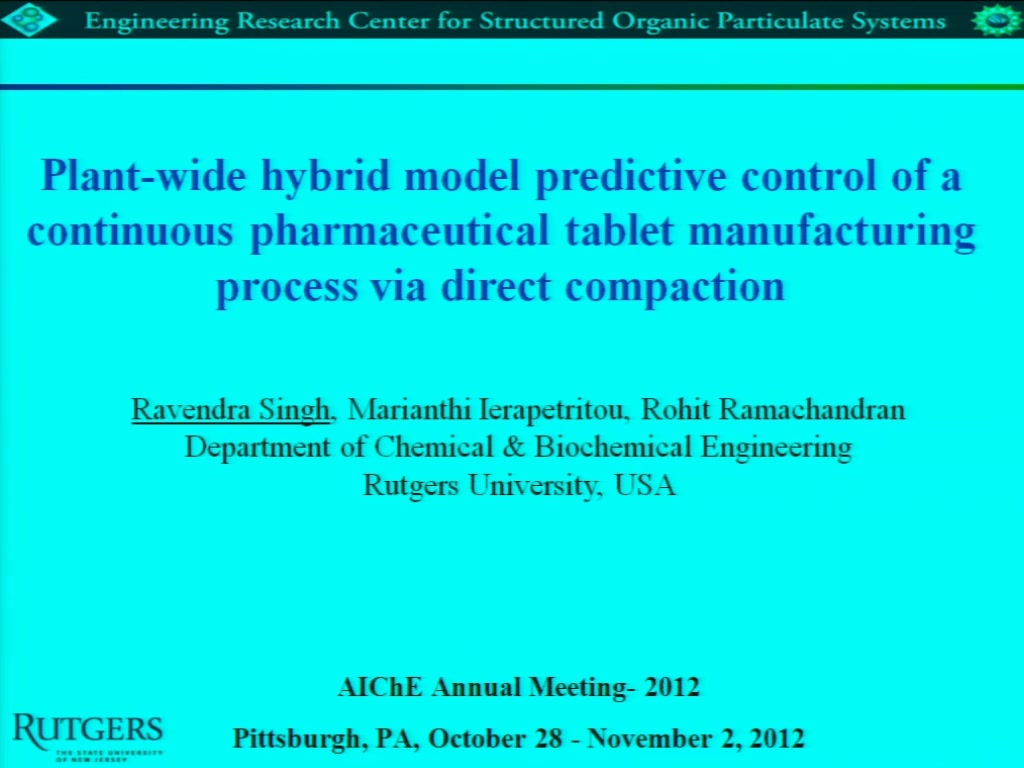 QbD and PAT requires the next generation of pharmaceutical products be manufactured through continuous processing integrated with online monitoring tools coupled with efficient automatic model-based feedback control system to achieve the precise control of process variables so that the predefined end product quality can be achieved consistently.

The direct compaction process considered in this study is highly interactive, nonlinear, and has time delays due to sensor placements, that indicate that a simple feedback regulatory control system (e.g. PI(D)) by itself may not be sufficient to achieve the tight process control as desired by regulatory authorities (e.g. FDA). In previous work, we have demonstrated that under certain conditions, such a control system may not be adequate [1]. Advanced model predictive control (MPC [2]) is the desired control strategy for this complex system especially for systems with multi-variate interactions. As a closed loop optimal control method based on the explicit use of a process model, model predictive control has proven to be a very effective controller design strategy over the last twenty years and has been widely used in process industry such as oil refining and chemical engineering. However, because of different level of complexity involved (e.g. solid handling, irregular flow) in addition to the unavailability of the suitable process model, the design and implementation of MPC in the pharmaceutical manufacturing involving the solid dosage form is still state of the art. In comparison to the regulatory control strategy previously proposed [1], the MPC is more complex and requires the development of higher fidelity models and robust optimization strategies. Depending on the process dynamics either linear MPC (LMPC) that required linear model and less computational power or non-linear (NMPC) MPC that required first principle model and more computational power can be used. However, with the state of the art computational power, the NMPC is not practical for the plant-wide control of complex multi variable system but it could be used efficiently to control the part of a plant which is highly nonlinear. Similarly, LMPC cannot be efficient for the control of the part of the plant which is highly non-linear. Therefore, a hybrid control strategy integrating the regulatory control system, LMPC and NMPC is highly desired for plant-wide control of a process comprising of fast, delayed, linear and non-linear dynamics.

In the work reported here, a hybrid control system integrating PID, LMPC and NMPC for plant-wide control of a continuous tablet manufacturing process has been developed. The continuous manufacturing process involved the state of the arts continuous unit operations including blending, tablet pressing and coating. Based on the analysis of the process dynamics, linearity and non-linearity analysis, the control variables has been placed into three groups: (i) the variables for which the PID controller is sufficient, (ii) the variables for which LMPC is required, (iii) the variables for which NMPC is essential. These variables have been then controlled with the corresponding control strategies. The categorization of these variables ensures the better control performance with optimal resources and computation power. The first principle model as well as the linear model of the continuous tablet manufacturing process has also been developed.  The performance of the hybrid control system has been evaluated and compared with the regulatory control strategy. The proposed hybrid strategy is currently being implemented in a continuous pilot plant at Rutgers University.

Preview Presentation:
Presenter(s):
Ravendra Singh
Once the content has been viewed and you have attested to it, you will be able to download and print a certificate for PDH credits. If you have already viewed this content, please click here to login.