Planning and Optimization of a Regional Hydrogen Supply Chain: An ASEAN Case Study 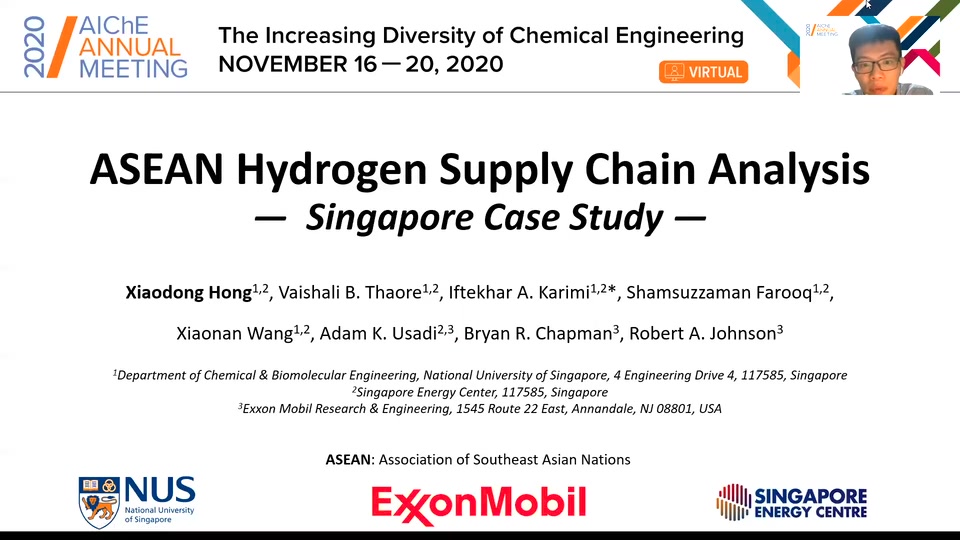 The world is seeking scalable and affordable low carbon and renewable energy sources to reduce atmospheric CO2 concentration levels while meeting rising global energy demand. Hydrogen is receiving significant attention worldwide as a versatile energy carrier and feedstock that can achieve deep decarbonization across energy and industrial sectors. Researchers have proposed various approaches to evaluate hydrogen supply chains. For example, Almansoori and Shah1 developed a multi-period hydrogen supply chain model, based on the hydrogen demand of fuel cell vehicles in the Great Britain from 2005 to 2034. Reuß et al.2 carried out a techno-economic comparison between different transport and storage infrastructure options for scenarios with 25%, 50% and 75% fleet penetration of fuel cell electrical vehicles in Germany. Seo et al.3 developed a novel hydrogen supply chain model to compare centralized storage and decentralized storage modes. However, most previous work has focused on country-specific supply chains, such as for the UK, Germany, or South Korea, and considered the transport sector as the only hydrogen demand, neglecting that hydrogen can also be utilized in power and industrial sectors. There is no study on regional hydrogen supply chains with multiple H2 demand sectors. A regional supply chain can capture the benefits of integrating energy-abundant areas with high energy-consuming areas.

In this research, a multi-period regional hydrogen supply chain model is developed for a better understanding of different pathways for a hydrogen economy in Singapore and the ASEAN countries through 2050. A comprehensive superstructure including hydrogen production, storage, delivery, and utilization is proposed. Both renewable and non-renewable hydrogen production technologies with applicable carbon capture and sequestration are included, reflecting the diversity of energy sources available in the region for hydrogen production. To compare diï¬€erent options for an ASEAN hydrogen supply chain through 2050, we carry out techno-economic analyses of hydrogen production taking into account location-dependent attributes, such as cost and carbon emissions. The variation of hydrogen demand over a long-term planning horizon is considered, as well as uncertainty of energy source prices and technological progress, to find the competitive production technologies in each year. Since the volumetric energy density of hydrogen is low, hydrogen must be transported and stored at high pressure or in liquid form, or via liquid organic hydrogen carriers or ammonia. Consequently, different transmission-storage-distribution pathways are also considered and evaluated to address the trade-off between the energy density, energy consumption, and facility cost. Based on the superstructure, a mixed-integer non-linear programming (MINLP) model is formulated to optimize both the total cost and carbon emissions of the hydrogen supply chain. The most effective pathways for producing, transporting, and storing hydrogen are being identified. Several what-if scenarios are explored to derive insight on relative emissions and costs associated with various hydrogen pathways for the ASEAN region.

Preview Presentation:
Presenter(s):
Bryan R. Chapman
Xiaodong Hong
Iftekhar A. Karimi
Farooq Shamsuzzaman
Farooq Shamsuzzaman
Vaishali B. Thaore
Adam K. Usadi
Xiaonan Wang
Once the content has been viewed and you have attested to it, you will be able to download and print a certificate for PDH credits. If you have already viewed this content, please click here to login.

Hydrogen Production Via Fermentation of Avicel and Corn Stover In a Sequencing Batch Reactor
When produced from waste lignocellulosic materials, hydrogen is one of the most promising options for a long-term, net-zero emission energy carrier. A major...
Operations of a Stratified Downdraft Gasifier On MSW for Development of a Waste to Energy Process
Southern Research is developing a small-scale MSW and biomass conversion process based on gasification to produce renewable power and liquid fuels. At the...