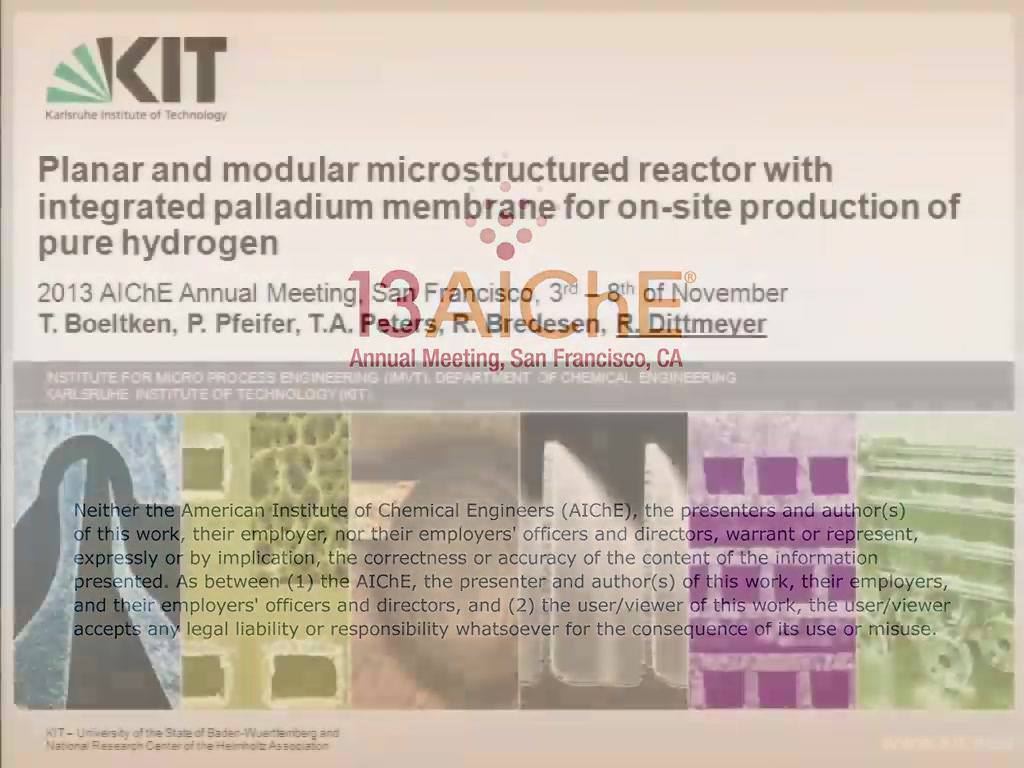 Hydrogen is one of the most important chemicals used in industry today. Over 80% of today’s hydrogen demand is covered by steam reforming of natural gas in large units with up to 1000 tubular reformers and capacities up to 100.000 Nm³/h [1]. Furthermore , hydrogen is often considered as the energy carrier of the future and its application as fuel for fuel cell vehicles and distributed power systems , which could reduce local CO , NOx and CO2 emissions , is anticipated. For these applications , on-site production of pure hydrogen in distributed reactors with integrated palladium membranes could be a solution , as the downscaling of conventional reforming processes based on steam reforming of natural gas is economically not attractive. The hydrogen purification steps , most commonly used is pressure swing adsorption (PSA) , are too energy intensive or complex at small scale [2 ,3]. In literature , also other applications for palladium-membrane reactors are discussed , for example the dehydrogenation of liquid organic hydrogen carriers (LOHC’s) , such as methylcyclohexane [4]. In these applications , the use of palladium-based membranes represents an efficient approach to in-situ separate hydrogen with ultra-high purity for direct use in PEM fuel cell systems. Furthermore , in equilibrium-limited reactions , continuous hydrogen separation results in advantages with regard to shift in thermodynamic equilibrium conversion and enhancement of reaction kinetics. Nevertheless , traditional membrane reactors based on porous metallic tubes may not offer the required membrane area per volume of the catalyst to match the H2 formation rate [4]. As a result , the produced hydrogen is not fully separated from the gas mixture or the activity of the catalyst is not entirely employed. Additionally , tubular arrangements suffer from a rather large distance between catalyst and membrane , which leads to a decrease in partial pressure of hydrogen towards the membrane surface and hence to a reduction of driving force for hydrogen separation (concentration polarization). As a result , the membrane area is not effectively used and larger membrane areas have to be installed. In this work , a planar microchannel membrane reactor , which is very compact and modular , was designed and constructed. In a first step , free-standing palladium-based foils of different thicknesses (3 – 61 µm) were leak tight integrated in a microstructured concept module by laser welding. In this concept , the membrane area for hydrogen separation was 1 cm2 and the potential of the microstructures in decreasing concentration polarization effects was demonstrated [5]. Due to the microchannels , high mass transfer rates and an increased hydrogen partial pressure on the membrane surface compared to conventional systems were achieved [5]. The microstructure served as a good mechanical support for the thin membranes up to temperatures of 400°C and retentate pressures up to 8 bar. For the application at even higher temperatures and pressures , the palladium foils were supported in a second concept by etched metal sieves coated with a YSZ diffusion barrier layer (DBL) for the prevention of diffusion of metal atoms from the base material into the Pd based membrane. No decrease of the mass transfer rate from the gaseous phase towards the membrane surface was observed due to the additional support and excellent membrane stability was obvious up to 600°C and 11 bar in pure hydrogen permeation experiments (and up to 20 bar retentate pressure at reaction conditions later). The bursting pressure was never reached. In a second step , different catalysts were prepared for the anticipated reactions methane steam reforming (Rh/Al2O3) and water-gas-shift (Pt/CeO2). The Rhodium-based Al2O3 catalysts were inkjet printed in the microstructures and tested in methane steam reforming and water gas shift at ambient pressure in a microstructured reactor in absence of a membrane [6]. Both catalysts showed promising high activity. In methane steam reforming full conversion of methane (98.9%) for a W/F ratio of 5.48 gCath/molCH4 and a steam-to-carbon ratio of 4 was obtained. The catalytic performance was modeled with a Langmuir-Hinshelwood mechanism and good agreement with experimental results was achieved. In a third step , the performance of the modular microstructured concept modules with integrated membranes was evaluated in methane steam reforming and water-gas-shift. Due to the thin catalyst layers a high membrane area-to-catalyst volume was achieved. The microstructured concept module showed promising stability at reaction conditions (temperatures between 623 and 773 K) and high amounts of CO (up to 32 vol.%) did not affect the hydrogen permeability of the Pd membrane. Based on these experiments , a modular microstructured reactor was designed and built. The electrically heated microstructured membrane reactor contains a section for pre-reforming of methane and a section for catalytic reaction including in-situ hydrogen separation. The results of the ongoing experiments will be presented. Additional benefits of a microstructured membrane reactor concept will be the heat integration. An outlook on these activities will be given. References[1] J.R. Rostrup-Nielsen , “Large-Scale Hydrogen Production” , CATTECH , 6 (2002) , 150 – 159. [2] J. Tong , “Pure hydrogen production by methane steam reforming with hydrogen permeable membrane reactor” , Cat. Today 111 (2006) 147 – 152. [3] H. Kurokawa , Y. Shirasaki , I. Yasuda , “Energy-Efficient Distributed Carbon Capture in hydrogen Production from Natural Gas” , Energy Procedia 4 (2011) 674 – 680. [4] R. Dittmeyer. V. Höllein , K. Daub , ”Membrane reactors for hydrogenation and dehydrogenation processes based on supported palladium” , J. Mol. Catal. A 173 (2001) 135 – 184. [5] T. Boeltken , M. Belimov , P. Pfeifer , T.A. Peters , R. Bredesen , R. Dittmeyer , “Fabrication and testing of a planar and microstructured concept module with integrated palladium membranes” Chem. Eng. Process. 67 (2013) 134 – 147. [6] S. Lee , T. Boeltken , A. Mogalicherla , U. Gerhards , P. Pfeifer , R. Dittmeyer , “Inkjet printing of porous nanoparticle-based catalyst layers in microchannel reactors” , Appl. Catal. A (submitted).

Preview Presentation:
Presenter(s):
Tim Boeltken
Once the content has been viewed and you have attested to it, you will be able to download and print a certificate for PDH credits. If you have already viewed this content, please click here to login.

Solid-Liquid Separation Technology for Removing Contaminant Fines from Water Scrubbing, Clarifier Effluents and Grey Water
Treating water for environmental and process benefits is becoming more important in the oil and gas, energy, bioenergy, biochemical and chemical industries. As...
Effects of Microporous Structure on Transient Diffusion and Adsorption of Hydrolytic Enzymes into Biomass
Generation of biofuels from lignocellulosic biomass is an emerging technology which is being investigated all around the world. Enzymatic hydrolysis is a major...