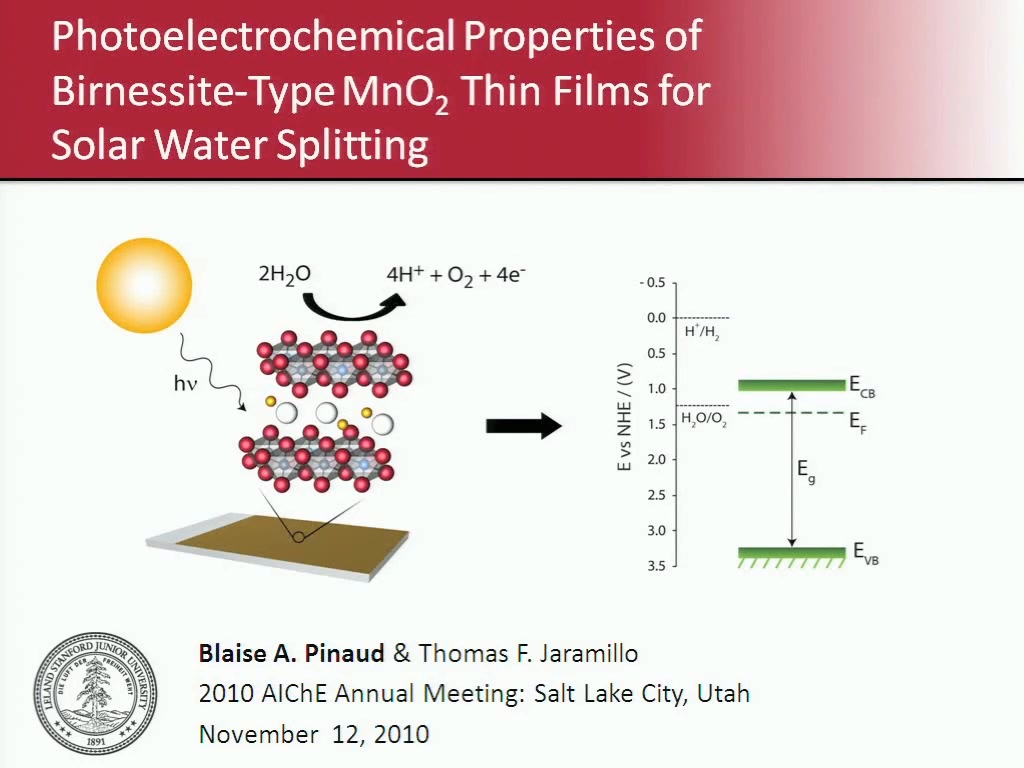 Photoelectrochemical (PEC) water splitting to produce clean hydrogen fuel is an attractive method for harvesting intermittent solar energy and storing it in the form of chemical bonds. A key photoelectrode material requirement is visible light absorption to maximize the number of photogenerated electrons and holes which can split water (DE=1.23V). Manganese oxides (MnOx) are promising photoanodes for PEC cells because they are good oxygen evolution catalysts [1] and the constituent elements are abundant, low cost and non-toxic. While photocurrent generation from MnO2 nanosheets has been demonstrated [2], a myriad of other MnOx phases remain unexplored for PEC. The objective of this work is to explore the photoactivity of birnessite-type MnOx. Thin films of sodium birnessite-type manganese oxide were electrodeposited on fluorine doped tin oxide substrates from a 2mM MnSO4 and 50mM NaClO4 solution [3]. Film morphology was investigated by scanning electron microscopy and crystallinity was studied by x-ray diffraction. Distinct yet broad peaks were identified at 12° and 24° which can be referenced to a crystalline birnessite-type structure with small grain size [3]. X-ray photoelectron spectroscopy was used to determine the oxidation state of manganese in the film [4]. The band gap of the semiconducting thin films was determined by UV-vis absorption spectroscopy; using a Tauc relation the direct band gap of the material was found to be 2.6eV which is larger than the optimal value of about 2eV [5]. Photoelectrochemical measurements were collected using a 1000W Xe lamp and potentiostat. A test cell with 0.1M NaOH was setup in a 3-electrode configuration with the supported MnOx thin film as the working electrode, a Pt mesh counter electrode and a Ag/AgCl (sat. KCl) reference electrode. Anodic photocurrent was detected during chopped illuminated cyclic voltammetry confirming a photoactive, n-type semiconductor. No significant photocurrent degradation was observed after 1 hour of testing at constant potential indicating the film is stable under the cell operating conditions. Preliminary calculations of the band edges based on the flat band potential indicate that the conduction and valence bands of the as-synthesized films straddle only the O2/H2O redox couple; a bias or tandem cell configuration is required to drive the H+/H2 reaction at the cathode. Photoelectron spectroscopy in air was used to confirm the position of the conduction band. Strategies to improve the design and performance of these photocatalysts will also be discussed. References 1. S. Trasatti, Electrochimica Acta, 29, 1503 (1984). 2. N. Sakai, Y. Ebina, K. Takada and T. Sasaki, J. Phys. Chem B, 109, 9651-9655 (2005). 3. M. Nakayama, T. Kanaya, J. Lee and B. Popov, J. Power Sources, 179, 316-366 (2008). 4. V. Di Castro and G. Polzonetti, J. Electron. Spectrosc. Relat. Phenom., 48, 117-123 (1989). 5. T. Bak, J. Nowotny, M. Rekas and C. Sorrell, Int. J. Hydrogen Energy, 27, 991-1022 (2002).

Preview Presentation:
Presenter(s):
Thomas F. Jaramillo
Once the content has been viewed and you have attested to it, you will be able to download and print a certificate for PDH credits. If you have already viewed this content, please click here to login.