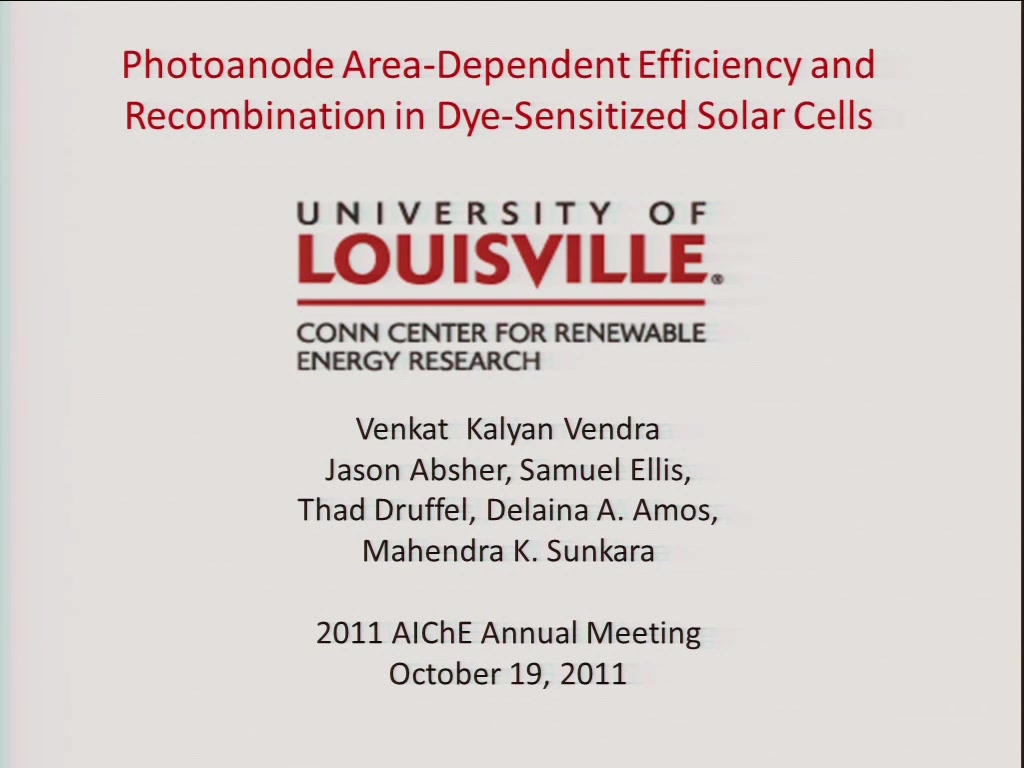 Current-voltage characterization was carried out on dye sensitized solar cells (DSSCs) with different photoanode areas ranging from 0.01 cm2 to 1 cm2. Surprisingly, we found that the short-circuit current density and the efficiency of the solar cells increased exponentially as the photoaonode area was reduced below 0.1 cm2. Furthermore, the fill factor remained constant in range of areas investigated and so this behaviour cannot be attributed to the resisitve losses in the solar cell. Understanding the electron transport and recombination in DSSCs with different photoanode areas could hold the key to explain these interesting results.

Several fundamental studies in literature have focused on understanding the electron transport and recombination in nanostructured photoanodes of DSSCs as the film thickness is altered. However, there have not been any reports which investigated how the transport and recombination and efficiency would be affected as the photoanode area of DSSCs varied. Only a few recent studies on organic solar cells have been reported where efficiency of the solar cells was found to dependent on the solar cell area.[1,2] This motivated us to explore how electron transport, recombination are affected with a change in the photoanode area of the DSSC. Interestingly, we found that the transport time constants for these cells of different areas remained the same, but the electron lifetimes increased as the photoanode area was reduced below 0.1 cm2. In addition, all these studies were performed with photoanodes comprising of different materials such as titania nanoparticles, tin oxide nanowires and tin oxide nanowire and titania nanoparticle composites and an increase in efficiency, short circuit current density and electron lifetime with a decrease in the cell area below 0.1 cm2 is observed in DSSCs constructed with all these materials. Our results suggest the possibility of different recombination mechanism when the area of the solar cell is reduced below 0.1 cm2 and also points out the need for a standardized area for characterizing the performance of DSSCs.

Preview Presentation:
Presenter(s):
Venkat Kalyan Vendra
Once the content has been viewed and you have attested to it, you will be able to download and print a certificate for PDH credits. If you have already viewed this content, please click here to login.