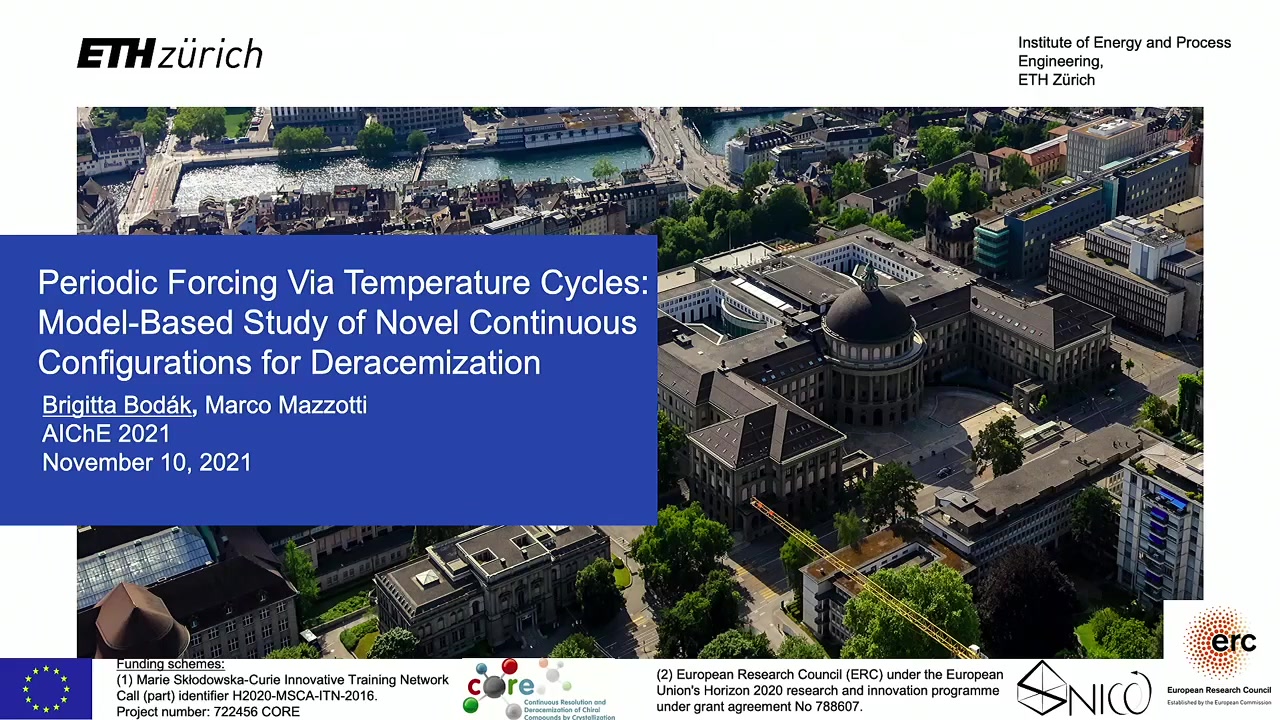 Crystallization is an attractive approach to achieve targeted production and isolation of the desired enantiomer in a productive and economically effective way due to its low capital and operating costs. Solid-state deracemization techniques, such as solid-state deracemization via temperature cycles can be applied to convert a racemic mixture of crystals to pure enantiomers by the periodic cycling of the temperature and by the utilization of a liquid-phase catalyst [1]. This process is conventionally operated in batch mode and it has been widely investigated in both experimental and simulation works [1,2,3]. However, its continuous counterpart that can be performed in mixed suspension mixed product removal crystallizers (MSMPRC) has not yet been proposed. This novel process can be more attractive than Preferential crystallization, which can reach only 50% yield.

In this work, we will focus on the model-based design and evaluation of four continuous configurations to perform Periodic Forcing via Temperature cycles (PFTC) and we comparatively assess their performance based on the enantiomeric purity and productivity, i.e., the key performance indicators (KPIs).

The mathematical model of the continuous process configurations was obtained by extending our population balance based model of batch temperature cycles [3]. Deracemization via temperature cycles is a complex interplay of several phenomena and mechanisms, thus the description of size-dependent solubility, crystal growth/dissolution, agglomeration, breakage and racemization are incorporated in the model.

Different configurations could be utilized to perform solid-state deracemization via temperature cycles in an MSMPRC. In all these cases, the MSMPRC initially contains a saturated solution, which is in contact with the seed crystals that are enriched in the target enantiomer and temperature cycles are applied periodically during the process. The configurations differ from each other in the type of the feed: in the first case, we feed racemic crystals and we aim at converting them into the desired enantiomer (configuration (A)). In this case, suspension is withdrawn and the solution is recycled after filtration to keep the volume of the crystallizer constant. For this configuration to be more productive and to reach larger enantiomeric excess, one can attempt to create larger asymmetry between the two enantiomers by partially recycling the obtained solid product (configuration (B)). Apart from feeding crystals, one can feed a suspension to the MSMPRC in an alternative configuration (configuration (C)). One could expect that by feeding not only racemic solid, but solution as well, the concentration of the enantiomers becomes more similar to each other as well, thus the driving force for racemization decreases and the deracemization process is hindered. It is worth noting that the only experimental example of continuous temperature cycling process, which employs spatial thermal oscillations in a tubular flow milli-reactor [4], also utilizes a suspension type of feed.

In continuous crystallization, a mechanism is needed to form new crystals, otherwise complete washing out of crystals from the crystallizer occurs. In the three configurations presented above, the feed contained racemic crystals, thus other crystal-generating mechanisms, e.g., attrition, breakage or nucleation, was not essential. However, in the fourth configuration we propose, only solution is fed (configuration (D)). Therefore, for the sake of simplicity, we have introduced breakage due to wet-milling to the system. It is easy to foresee that with this configuration one can attain larger productivity and enantiomeric purity: as a result of introducing the undesired enantiomer into the system in the solution, one step (the dissolution of the undesired enantiomer) can be spared with respect to the solid-fed configuration.

With the aid of the mathematical model, we have simulated continuous temperature cycles performed in the proposed continuous configurations [5]. We have analyzed first the solid-fed configuration (configuration (A)) in detail: the enantiomeric excess increases during the startup, and then reaches a periodic steady state, which is bounded by the lower and upper limits corresponding to the enantiomeric excess at low and high temperature, respectively. The average periodic steady state enantiomeric excess was chosen as a key performance indicator, together with the average periodic steady state productivity, to compare the processes. A simulation study on the effect of operating conditions, such as the residence time, feed rate and cooling rate was carried out. We have identified that by increasing the residence time or the feed rate, one can significantly improve the process performance.

Second, we have verified that by partial recycling of the crystalline product, slightly higher average steady state enantiomeric excesss and productivity can be attained (configuration (B)). Third, we have investigated the configuration with the suspension feed (configuration (C)). The average steady state enantiomeric excess was found to be lower than that of the solid-fed process, as expected. We have explored the effect of varying the operating parameters to increase the process performance. Then, we have used the model to simulate the solution-fed operation (configuration (D)). Finally, we have studied an MSMPRC cascade for the production of enantiopure crystals.

Various novel MSMPRC-based approaches have been proposed by means of model-based studies to perform solid-state deracemization via temperature cycles in continuous operation. The advantages and pitfalls of each technique have been assessed, together with the potential performance improvements achieved by carefully selecting the operating conditions. This contribution serves as a guide to transform the conventional batch process of temperature cycles to continuous operation.

This project has received funding from the European Research Council (ERC) under the European Union's Horizon 2020 research and innovation programme under grant agreement No 2-73959-18. 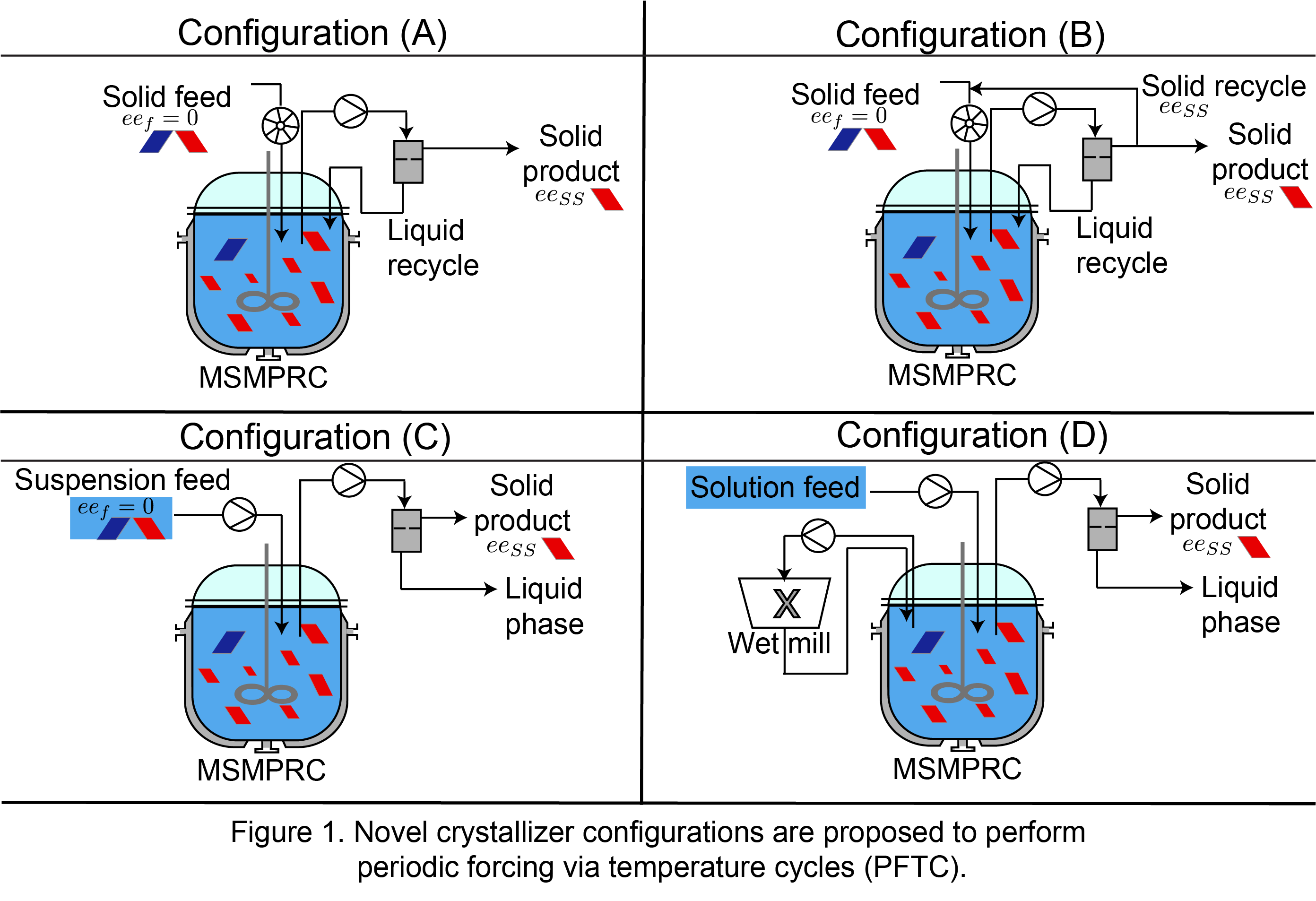 Preview Presentation:
Presenter(s):
Brigitta Bodák
Marco Mazzotti
Once the content has been viewed and you have attested to it, you will be able to download and print a certificate for PDH credits. If you have already viewed this content, please click here to login.

Boost Octane of Light Naphtha Isomerization Units Using Dual Dividing Wall Column Technology
Advancements in distillation can play a key role in minimizing costs of new and revamp projects in a refinery. Dividing wall column technology which had...
Considerations for Transient Operation - Fire Incident
This is the story of a root cause analysis (RCA) for a fire in a chemical operation during a transient operation. Findings from this investigation illustrate...