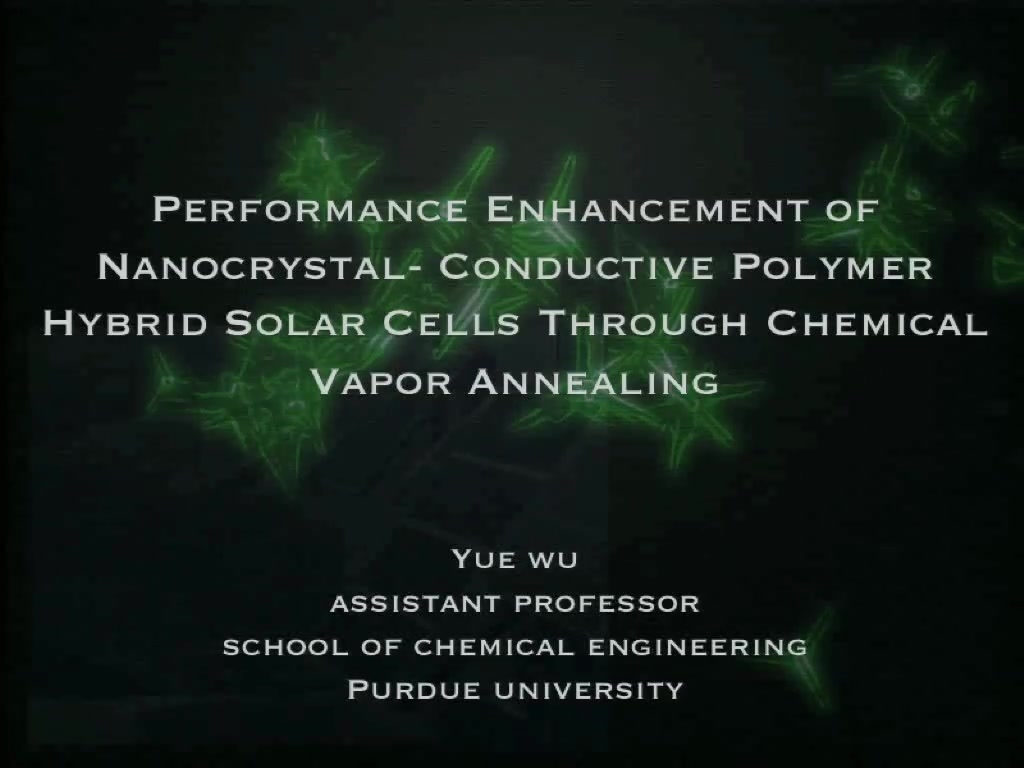 Semiconductor nanostructure-based solar cells, such as dye-sensitized solar cells, all-inorganic nanostructure solar cells, and hybrid inorganic nanostructure-conductive polymer composite solar cells, are promising candidates for future-generation photovoltaic devices due to their advantages in low temperature processing, scalability, and low cost. Among these different types of nanostructurebased solar cells, hybrid solar cells, which originated from the concept of organic polymer bulk heterojunction solar cells, possess a unique architecture of a solid-state blend of interpenetrating and percolating inorganic nanostructures and organic polymers. In principle, hybrid solar cells should demonstrate a better performance when compared with organic polymer bulk heterojunction solar cells due to the higher absorption coefficient of inorganic semiconductor nanomaterials. However, so far there has been no report of higher performance observed in hybrid solar cells than organic bulk heterojuction solar cells in the real experiment, which can be mainly attributed to the complicated surface/interface of nanomaterials, for example, the existence of non-conductive surfactant molecules with long alkyl chain such as phosphonic acids on the surface of nanocrystals. Notably, in all-inorganic nanocrystal solar cell system, this problem could be solved through surface ligand exchange reactions by replacing of long alkyl chain surfactants with short chain molecules, for example, chloride, hydrazine, amine, thiol, etc. After the ligand exchange reactions, the inter-particle distance in the nanocrystal films is getting smaller, thus facilitate the electron/hole transport. It would be ideal that a similar approach could be developed during the solution process of nanocrystal/conductive polymer hybrid solar fabrication. However, practically it still remains a challenge because once the long alky chain ligands on the nanocrystal surface are replaced with small molecules, the nanocrystals tend to aggregate and precipitate out from the organic solvent, thus cannot be mixed uniformly with conductive polymer any more for solution process. On the other hand, solvent vapor annealing process has been demonstrated as an effective approach to improve crystallinity of organic semiconductor thin films and enhance their electrical properties. Herein, we report the first demonstration of how a straightforward, one-step, chemical vapor annealing process involving surface ligand exchange reaction can dramatically improve the power conversion efficiency of a hybrid solar cell composed of cadmium selenide (CdSe) nanorods, as an electron acceptor and a conducting polymer, poly(3-hexylthiophene) (P3HT), as an electron donor, without the sacrifice of solution processability of nanocrystals in organic solution and polymer blend.

Preview Presentation:
Presenter(s):
Yue Wu
Once the content has been viewed and you have attested to it, you will be able to download and print a certificate for PDH credits. If you have already viewed this content, please click here to login.

Atomic Layer Deposition of Nanoscale Materials for Energy Conversion
For a number of technologies, including microelectronics and energy conversion devices, feature sizes are becoming increasingly small, and the need for precise...
HycycleS: Materials and Components for Hydrogen Production by Sulphur Based Thermochemical Cycles - Summary of Key Results From the European Collaborative Project
HycycleS is a European Framework 7 project focussing on the decomposition of sulphuric acid, a key step in the Hybrid Sulphur and Sulphur Iodine thermochemical...