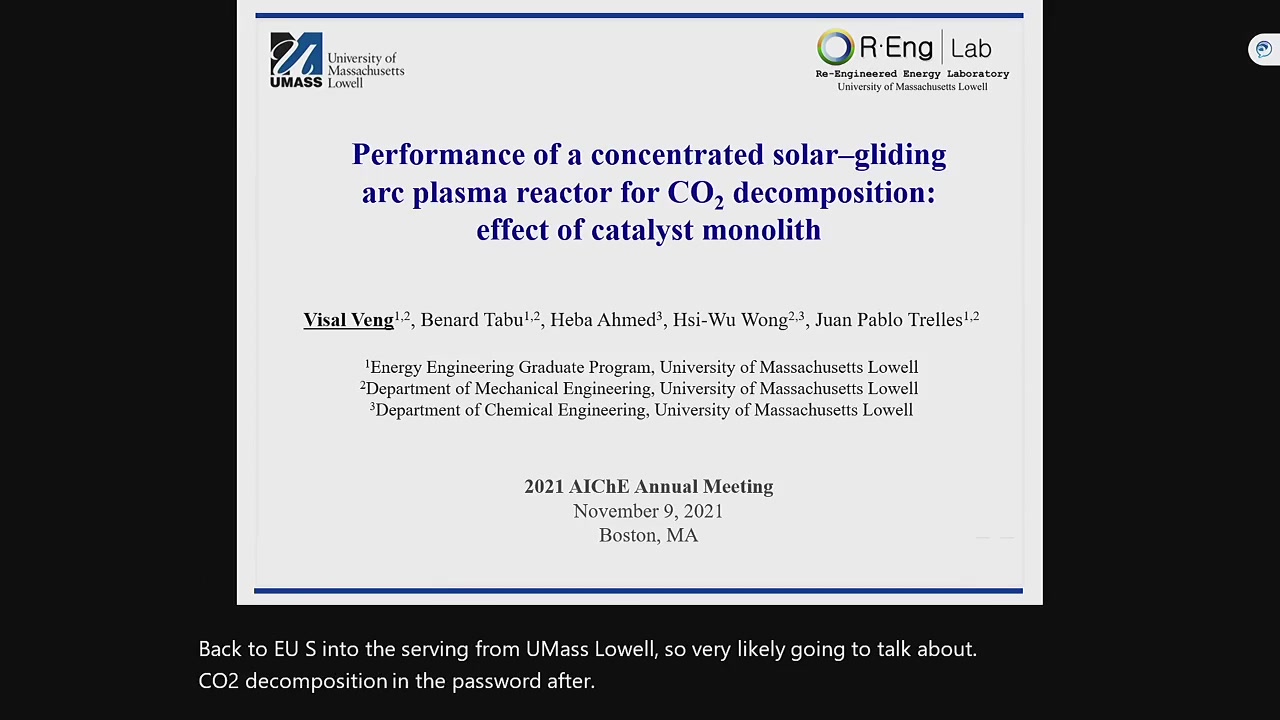 Among approaches to reduce the increasing amount of atmospheric CO2 [1], such as carbon capture and sequestration [2], the conversion of CO2 into value-added fuels and chemicals using renewable energy does not only mitigate environmental emissions, but also contributes to sustainable development. Solar thermochemical CO2 conversion approaches [3], by their direct use of the most abundant form of renewable energy, are among the most sustainable; however, their viability is limited by the inherent intermittency of solar irradiation. In contrast, plasmachemical methods can be very efficient and operate continuously, yet their sustainability depends on their use of electricity from renewable sources. The combined use of solar thermochemical and plasmachemical methods has the potential to lead to more sustainable and viable CO2 conversion approaches. Computational studies have shown that CO2 in nonequilibrium plasma state absorbs drastically more solar energy than CO2 in thermodynamic equilibrium [4]. Moreover, experimental studies have demonstrated that greater CO2 conversion efficiency is obtained by the combined use of concentrated solar radiation and plasma as compared to plasma or solar energy alone [5-7]. Prior studies of the combined use of concentrated solar radiation and a gliding arc discharge plasma for CO2 conversion [5, 6] did not include the incorporation of catalytic monoliths in order to more clearly discern the interaction between solar photons and plasma species. The incorporation of catalytic monoliths, essential in solar thermochemical processes [8], has the potential to lead to significantly improved CO2 conversion performance. The design, operation, and performance of a concentrated solar - gliding arc plasma reactor for CO2 decomposition fitted with zirconia (Zr) foam catalytic monoliths are presented. A 6.5 kW high-flux solar simulator is used as the concentrated solar energy source. The focal point of the concentrated radiative flux is located at the point where a three-prong electric arc discharge, powered by two 120 W high-voltage power supplies, forms. The arc discharge plasma interacts with the incident solar radiation as it glides along three divergent electrodes to finally impinge on the Zr monolith. Optical visualization together with dynamic current, voltage, and power signals are used to characterize the process. Outflow gas samples are collected as function of process time and analyzed by Gas Chromatography to determine gas products. Conversion and processes efficiency as function of process parameters, including solar power, electric power, and catalytic monolith arrangement, are analyzed and presented.

Acknowledgements: This work has been supported by the U.S. National Science Foundation through award CBET-1552037.

Preview Presentation:
Presenter(s):
Heba Ahmed
Benard Tabu
Juan Trelles
Visal Veng
Hsi-Wu Wong
Once the content has been viewed and you have attested to it, you will be able to download and print a certificate for PDH credits. If you have already viewed this content, please click here to login.