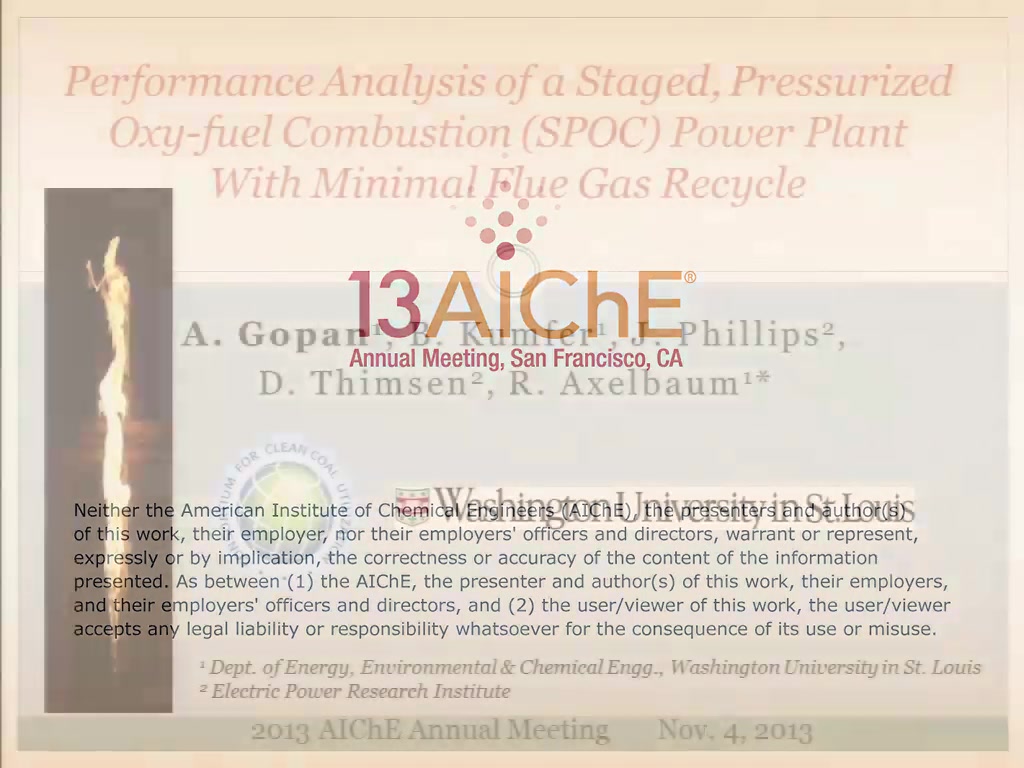 Power plant CO2 emissions account for a major portion of the anthropogenic greenhouse gases emitted to the atmosphere. Presently, the costs associated with the capture of carbon dioxide from coal-fired power plants using first-generation oxy-combustion technology are prohibitively high. The U.S. Department of Energy (DOE) has set a goal of developing technologies that can lead to more than 90% capture of carbon dioxide, with an increased cost of electricity of no more than 35%, as compared to a similar plant without carbon capture. One approach that has shown promise to both reduce capital costs and improve power plant efficiency is pressurized oxy-combustion.

Pressurizing the combustion process increases the dew point of the flue gas moisture and allows for condensation at high temperatures. The large latent energy associated with the flue gas moisture can be effectively integrated with the Rankine cycle to increase the efficiency of the process. It also reduces equipment sizes, and eliminates air ingress, resulting in higher CO2 purity in the raw flue gas.

There have been some studies in recent years to analyze the effect pressurization has on the overall performance of an oxy-combustion power plant [1-3]. Results have shown that an improvement in net efficiency of about 3% points can be gained over what has been reported for first-generation oxy-combustion plants[2, 4].

In this presentation, a new DOE-funded project under the Advanced Oxy-Combustion Technology Development and Scale-up for New and Existing Coal-Fired Power Plants program will be introduced. The goal of the project is to optimize the design of a unique pressurized oxy-combustion process that incorporates fuel staging to minimize the cost of electricity (COE).

In the Staged, Pressurized Oxy-Combustion (SPOC) process, combustion is carried out initially at very high stoichiometric ratio, enabling control of temperature even with minimal flue gas recycle. To enable combustion under non-stoichiometric conditions, fuel is brought into the combustion chamber in stages. In the first stage, the coal is burned in nearly pure oxygen. However, the amount of coal is small and the amount of excess O2 is very large. With proper mixing rates, the temperature of the combustion products of the first stage can be controlled since there is a large amount of excess O2, which effectively acts as a diluent. Also, the amount of coal consumed in the first stage is relatively small.  The products of the first stage, a mixture of O2, CO2 and H2O, enter stage 2, where more fuel is injected and more O2 is consumed. Since the O2 is diluted with the products and the products have been cooled, the peak flame temperature in this stage can be lower than the first stage. This process continues in multiple stages until nearly all of the O2 is consumed.

In this work, the performance and costs of a 550MWe (net) power plant employing the SPOC process are investigated. An integrated pollutant control method was used to remove the NOx and SOx. Process and systems modeling was performed using ASPEN Plus software. Sensitivity studies to understand the effect of pressure and the effect of the excess oxygen concentration in the flue gas on the overall performance are also presented.

This study shows that with the SPOC process, a net plant efficiency can be achieved that is similar to that of a sub-critical, air-fired PC power plant that does not have carbon capture. It is also concluded that a more advanced Rankine cycle, with higher throttle pressure and temperature results in an efficiency similar to that of a super-critical, air-fired PC power plant. The increased efficiency, compared to a first-generation oxy-fired plant, is due to both an increase in pressure allowing for the recovery of the latent heat in the flue gas moisture, and the staged process allowing for a significant reduction of the auxiliary load for recycling flue gas.

Preview Presentation:
Presenter(s):
Akshay Gopan
Once the content has been viewed and you have attested to it, you will be able to download and print a certificate for PDH credits. If you have already viewed this content, please click here to login.

AI Deployment in Refinery Operations
The process industries have begun to realize value from data analytics and machine learning, following on the success experienced in other manufacturing fields...
Future Technologies
Water aiding in space exploration, rethinking what constitutes "fuel" production, energy storage directions, and more are covered in this curated series of...