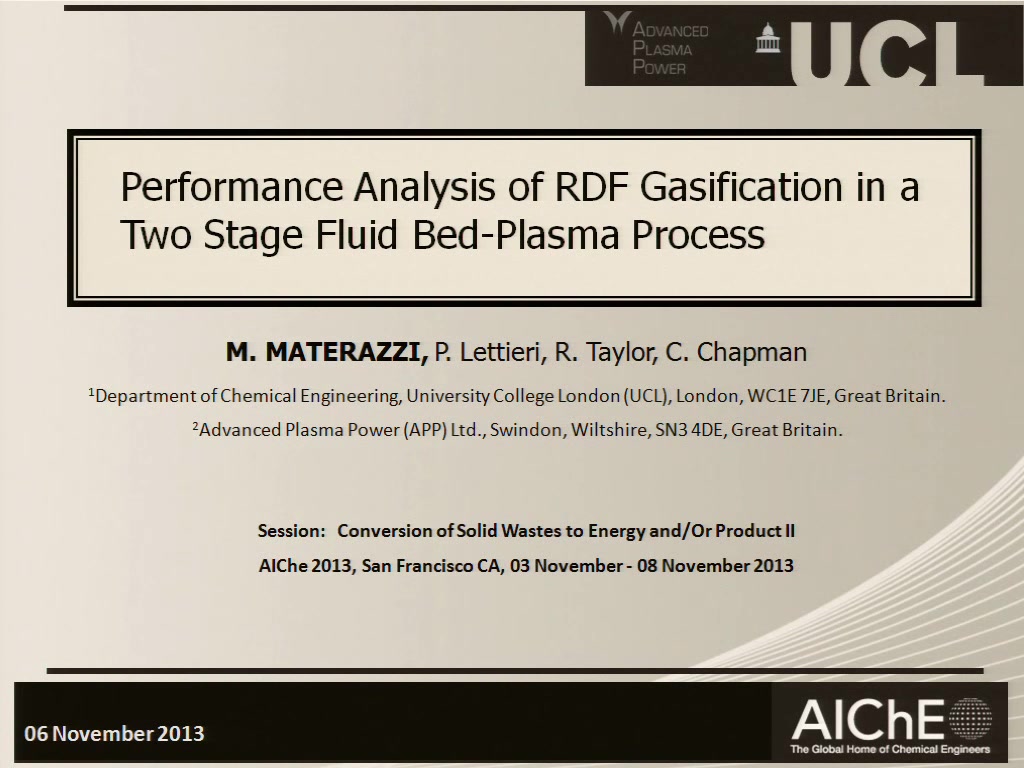 Tar generation and ash disposal represent the strongest barrier for use of single stage fluid bed gasification for waste treatment, whereas sufficing for both is only possible with expensive cleaning systems and further processing. Waste fuels have, in general, physical and chemical characteristics much different from fossil fuels, so that the behaviour of these two feedstock types in high temperature fluid beds is very different one from the other. The high content of ashes and inorganic materials in RDF (Refuse Derived Fuel) dictates the thermal conditions in the fluid bed. A relatively low temperature has to be used to prevent agglomeration and sintering of bed material. For this reason, the gas that is produced by a standard fluid bed gasifier (FBG) has tars and other condensable organic species that are technically difficult and costly to remove. Furthermore, the bottom ash that is generated in the reactor may contain high levels of carbon, heavy metals and organic pollutants which lower the conversion efficiency of the process and limit any secondary usage.

The use of plasma systems has increasingly been applied with thermal waste treatment for its ability to completely decompose the input waste material into a tar-free synthetic gas and an inert, environmentally stable, vitreous material known as slag. The principal advantages that plasma offers to thermal conversion processes, besides the already mentioned tar/ash related issues absence, are a smaller installation size for a given waste throughput, and the use of electricity as energy source, characteristics which permit the technology to treat a wide range of low calorific value materials including liquids and solids. In applying the plasma technology to the gaseous products from a FBG, an advanced two-stage thermal process is able to achieve efficient conversion of the chars and the complex organics to the primary syngas constituents whilst limiting the electrical energy demand of the process (Figure 1).

This study focused on the thermodynamic assets of using a two-stage (FBG + plasma) thermal process over the conventional single-stage approach.  These include, for example, the fact that the primary thermal waste decomposition is performed in conditions of optimal stoichiometric ratio for the gasification reactants. Furthermore, staging the oxidant injection in two separate intakes significantly improves the efficiency of the system, reducing the plasma power consumption. The aim of the present work is also to determine the effects of the thermal parameters so as to be able to select optimum gasification conditions in a two stage process and to clarify the mechanism of thermal decomposition of carbonaceous materials in the FBG and in the plasma converter.

A flexible model capable of providing reliable quantitative predictions of product yield and composition after the two-stage process has been developed. The method has a systematic structure that embraces atom conservation principles and equilibrium calculation routines, considering all the conversion stages that lead from the initial waste feed to final products. The model was also validated with experimental data from a demonstration plant in Swindon (UK) (Table 1).

Table 1: Experimental parameters and characteristics of solid wastes (as received).

The study effectively demonstrated that the two-stage gasification system significantly improves the gas yield of the system and the carbon conversion efficiency, which are crucial in other single stage FBG systems, whilst maintaining high energy performances.

The most important outcome of this analysis is that the important parameters that define the performance of the fluid bed-plasma process are the oxidants (oxygen and/or steam) streams and the plasma power. These parameters are function of the type of waste and the detailed aim of the project. Furthermore, the two-stage performance can be quite accurately predicted by assumption of thermodynamic equilibrium.

There is close correlation between the observed and predicted values of the syngas exiting the plasma converter, although the actual level of CO is still ~1% below the theoretical value while the CO2 level is 1.5% higher. The noted differences are likely due to flow and RDF composition uncertainties rather than from the predictive model. Given the size and configuration of the demonstration plant and the inherent variability of real RDF uncertainties are to be expected. The layout of syngas heating value (LHV) and cold gas efficiency (CGE) have been calculated and analyzed. It was found out that high LHV and CGE values are maintained in different power and oxygen conditions. The reason is that addition of plasma power into the converter decreases the amount of secondary oxygen required for complete gasification and produces larger amounts of CO and H2 in the product gas. The optimizing direction for the two-stage process can only be determined after considering the detailed situation on different projects.

Preview Presentation:
Presenter(s):
Massimiliano Materazzi
Once the content has been viewed and you have attested to it, you will be able to download and print a certificate for PDH credits. If you have already viewed this content, please click here to login.

Implementation of Advanced Hybrid MPC-PID Control System Into a Continuous Pharmaceutical Tablet Manufacturing Pilot-Plant
There is a need in pharmaceutical industry for the introduction of innovative manufacturing strategies based on continuous processing that is integrated with...
Increased Fouling Potential and Mitigation Plans for Heavy Sour Crude Oils
It is becoming a widespread norm that refineries are processing an increasing quantity of heavy and sour crudes than ever before. The depleting oil reserves of...