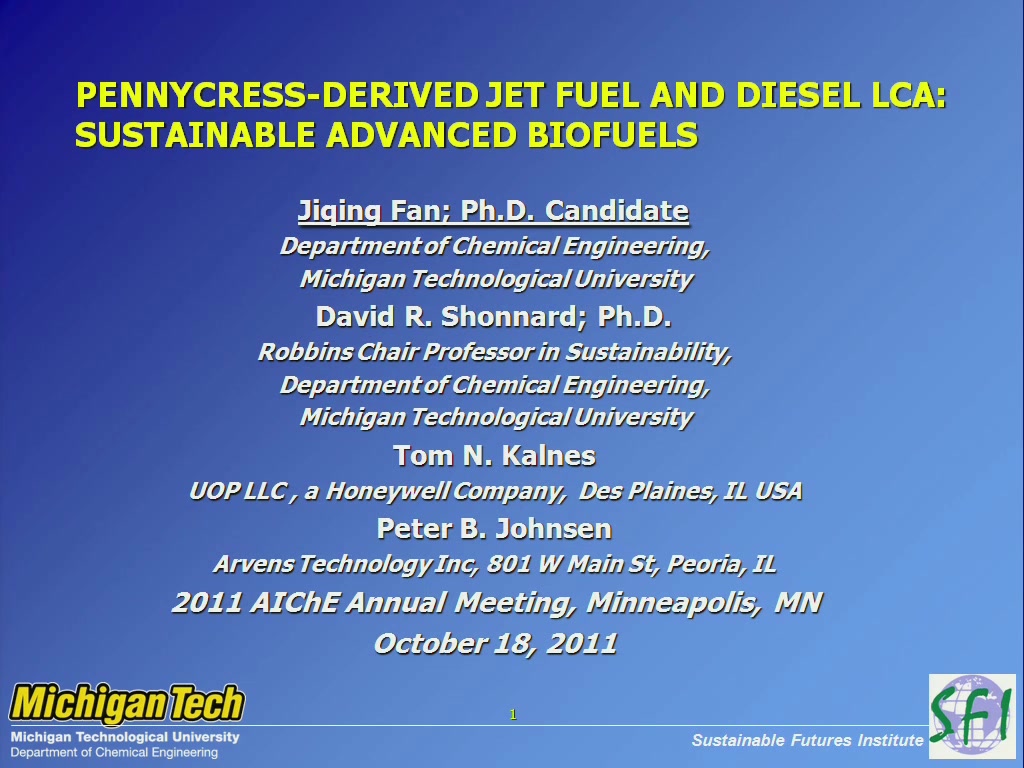 Pennycress-derived jet fuel and diesel show promise as emerging biofuels that can help reduce dependence on petroleum imports, lower the trade deficit, and most importantly, lower greenhouse gas (GHG) emissions. Pennycress is a prolific seed producer with yields of more than 2000 pounds of per acre. The seeds contain 36% oil by weight, nearly twice the amount as soybeans. In the envisaged biofuel scenario, Pennycress would be grown between segments of a typical corn/soybean rotation, thus avoiding the concerns of a fuel crop competing with food crop production. As useful applications for pennycress meal develop, the oil is expected to become a sustainable alternative for advanced biofuels production.

The goal of this study is to determine the life cycle GHG emissions, cumulative energy demand, and fossil energy demand of pennycress-derived Hydroprocessed Renewable Jet (HRJ) fuel and Renewable Diesel (RD) as produced by the UOP EcofiningTM process, and compute the GHG savings per MJ of fuel compared to petroleum-based jet fuels and diesel. The scope of this study encompasses the entire life cycle from pennycress cultivation and raw materials acquisition through the production and use of the fuels in vehicles and aircraft operations. The pennycress is grown in the Midwestern United States as a winter annual. After harvesting, the pennycress seeds are transported to a centralized processing facility where the oil is recovered and a de-oiled meal co-produced for use as a secondary energy source or animal feed. The oil is then transported to a hydroprocessing plant as a source of renewable feedstock for HRJ and RD production. Inventory data for pennycress cultivation, transportation, and oil recovery were provided by Arvens Technology Inc. Data for conversion of the pennycress oil to HRJ and RD were obtained from engineering design data, and was supplied by UOP. All the inventory data were assembled based on energy content of 1 MJ of final fuel product, which was the functional unit of this life cycle assessment (LCA) study. In the base case, energy allocation was applied to distribute environmental impacts among various products and co-products along the life cycle of each biofuel. The life cycle GHG emissions (excluding land use change) for RD and HRJ are 26.5 and 28.5 g CO2 eq./MJ fuel, which represent savings relative to petroleum fuel counterparts of 72% and 69% respectively. Total energy consumption for each pennycress biofuels product is comparable to petroleum fuels with the exception that most of the energy is derived from renewable biomass as opposed to non renewable fossil. Scenario analyses were also conducted to determine response to model assumptions and data uncertainty, including allocation methodology, fertilizer application rate, source of H2, and land use change. The results show that pennycress derived biofuels could qualify as advanced biofuels as defined by the Renewable Fuels Standard (RFS2).

Preview Presentation:
Presenter(s):
Jiqing Fan
Once the content has been viewed and you have attested to it, you will be able to download and print a certificate for PDH credits. If you have already viewed this content, please click here to login.

Gaps and Barriers to Carbon Management Technologies: Outcomes of the Founder Societies Technologies for Carbon Management Workshop
A workshop on addressing gaps and barriers to lowering carbon emissions in electric power and transportation was held October 21-22, 2009 in Baltimore,...
New Design for Advanced Zero Emission Power Plant Concept
The most significant anthropogenic greenhouse gas is CO 2 , which arises mainly from the use of fossil fuels. A new technology called Advanced Zero Emission...