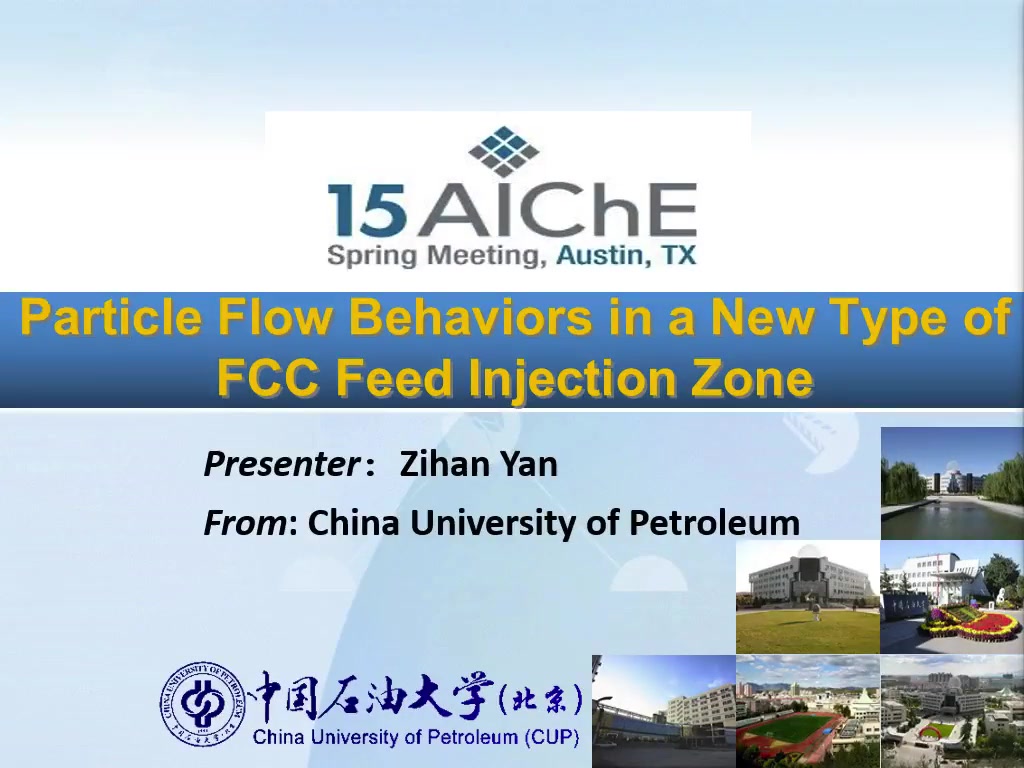 Fluid catalytic cracking (FCC) process is one of the most important techniques in the refining industry. In the present FCC reactor-regenerator system, riser reactor is one of the most important units in which the catalyst particles contact with the vaporized feed oil and convert it into light products. A riser reactor can usually be divided into four parts according to the different functions, i.e. the pre-lift zone, the feed injection zone, the full reaction zone and the quenching zone. In the feed injection zone, the contact and flow conditions of oil with catalysts will directly affect the FCC reactions. The present research about gas-solid flow behaviors in the conventional feed injection zone indicates that the catalysts distribute quite non-uniformly. Moreover, a secondary jet flow appears near the wall of the riser when the feedstock is injected, which will intensify the back-mixing of catalyst particles. These conditions are believed to be harmful for the contact and reaction of oil with catalyst particles. In order to improve the non-uniform cross-sectional local density distribution of catalysts in the feed injection zone, a new type of feed injection scheme is proposed in which the feed jets countercurrent contact with the catalysts.

To investigate the particle flow behaviors in this new type of FCC feed injection zone, a large-scale cold model was designed and established based on the characteristics and operating conditions of FCC reactor-regenerator system. The feedstock nozzles are downward sloping, so that the inject gas will contact with the catalyst particles countercurrent. The local particle concentration and velocity distributions in this new type of feed injection zone are obtained by using the optical fiber probes. Furthermore, the influences of operating conditions and setting angles of nozzles on the flow features in the feed injection zone are analyzed.

Experimental results show that the influencing region of the feed jets in the new feed injection scheme is from 0.675 m below the nozzles to 0.675 m above the nozzles based on the flow behaviors of catalyst particles. Compared with the conventional structure, this influencing region shortens above the nozzles considerably while somewhat extends below the nozzles. The particle flow behaviors in different measuring cross sections have different characteristics. In the cross sections of 0.375 m and 0.185 m below the nozzles, the radial concentration profile of the catalyst particles distributes quite uniformly from the wall to the center of riser. Besides, the axial velocity of catalyst particles is high in the center of the riser. This place is the initial contacting area of oil with catalysts, such characteristics of particle concentration and velocity distributions will promote the mixing and reaction of feed oil with catalysts. In the cross section of 0.185 m above the nozzles, the particle concentration assumes a very high value near the riser wall and a low value in the riser center. In other words, the particle concentration distributions have a very sharp gradient across the whole cross section, which will have undesirable effect on the cracking reactions. Fortunately, the particle concentration and velocity distributions will recover to the typical annular-core structure in a very short time. In the cross section of 0.675 m above the nozzles, the gas-solid two-phase flow behaves like a typical annular-core structure again, which indicates that the jet gas, pre-lift gas and the catalyst particles have mixed fully. Based on the particle concentration and velocity distributions in different cross sections, the new type of feed injection zone can be divided into three zones, i. e. the upstream transition zone (-0.675 m<H<-0.375 m), the jet controlling zone (-0.375 m<H<0.185 m) and the downstream transition zone (0.185 m<H<-0.675 m). The lengths of the upstream and downstream transition zones will decrease if increasing the setting angle of feed nozzles. However, a dense-phase region that contains too much particles near the wall of riser above the nozzles will appear when the setting angle is too large, which is believed to be harmful to the mixing and reaction of oil and catalysts. In order to improve the radial distribution of particles, higher pre-lift velocity and lower nozzle jet velocity are needed under the permitted operating conditions. The proper pre-lift gas velocity is 4.1 m/s while the nozzle exit velocity is 64.2 m/s.

Preview Presentation:
Presenter(s):
Zihan Yan
Once the content has been viewed and you have attested to it, you will be able to download and print a certificate for PDH credits. If you have already viewed this content, please click here to login.

Evaluation and Prevention of Potential Cold Embrittlement Hazards in Petrochemical Facilities
A summary of contemporary practices and approaches for evaluating and preventing potential cold embrittlement hazards within ethylene production facilities...
An Overview of Recycle Streams As a Source of Contamination
To minimize waste, steam crackers tend to feature a range of recycle streams, either internally within the plant, or externally from neighboring units. These...