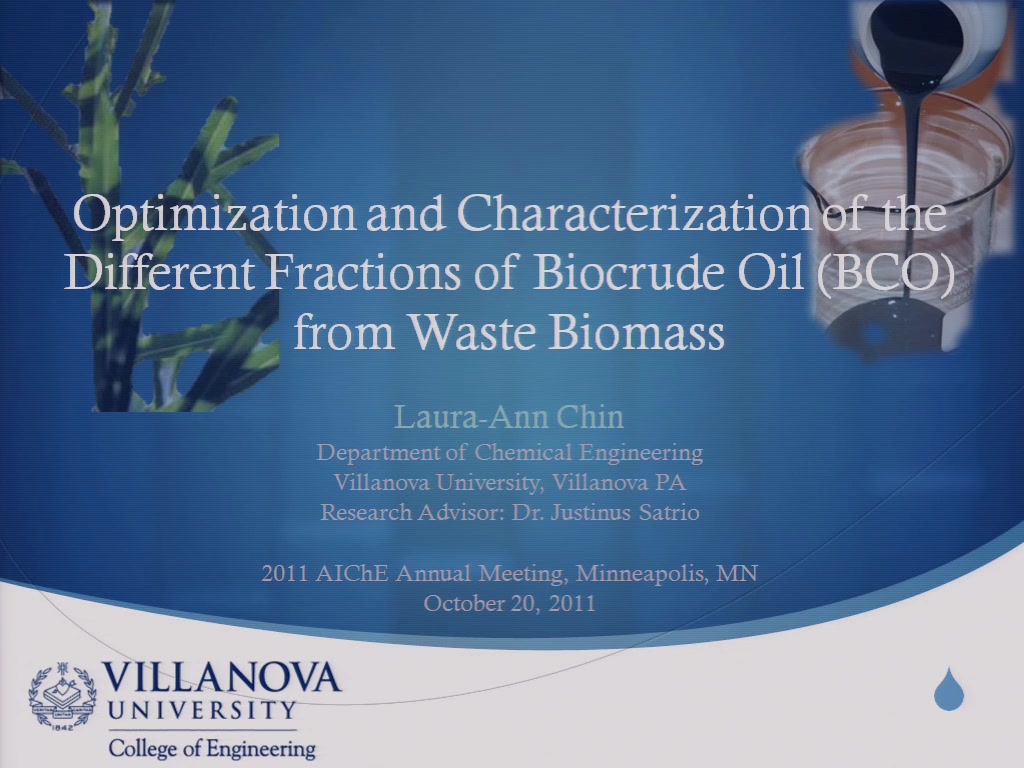 The increasing demand for heightened energy security, the sky rocketing prices of oil and the concerns over escalating greenhouse gas (GHG) emissions due to fossil fuels are the main reasons why biofuels could potentially be one of the viable energy carriers of the future. Biofuels are derived from biomass, which are rich in its distinctive components such as cellulose, hemicellulose, lignin and extractives. Abundant virtually everywhere around the globe, biomass is the world’s oldest source of energy and currently accounts for 10% of total primary energy consumption. While traditional biomass in the form of fuel wood constitutes the main source of bioenergy, liquid biofuel with a higher energy density (density is 1280 kg/m3 compared to approximately 160 kg/m3 for original biomass) has demonstrated rapid growth in the last decade.

Thus, the goal of this study is to characterize and understand the chemical and physical properties and different treatment methods behind lignocellulosic biomass. Biomass in general is inhomogeneous and is susceptible to different impurities. Its high water content and bulky nature calls for pretreatment methods such as Torrefaction and hydrolysis to improve the quality of biomass to make them better feedstocks for biomass conversion processes. Then, energy densification methods by liquefaction to form biocrude oil (BCO) are carried out. Liquefaction takes place in the form of various thermochemical routes namely fast pyrolysis, solvolysis and direct hydrothermal liquefaction in which BCO can then be further processed into different carbon-based products. A sound understanding of the key parameters influencing the physicochemical properties of BCO will then allow further explorations on controlling fast pyrolysis reactions to customized end products.

Due to the complex nature of BCO consisting of various chemical compounds with distinct physicochemical properties, processing BCO using conventional petroleum refinery technologies is difficult. Hence, upgrading work will evolve around gaining a better understanding on improving the properties of BCO. For example, increasing the thermal stability of BCO as a feedstock in catalytic/steam gasification reactions to produce hydrogen and catalytic cracking or hydrogenation to form liquid hydrocarbons.

Currently, what is known is that in order to optimize the use of biofuels, a one-part treatment will not suffice. In other words, BCO needs to be separated in different fractions to be optimally used. For instance the low molecular weight compounds of BCO can be separated out into the aqueous phase by liquid-liquid extraction using water, which can then undergo photocatalysis to produce H2 gas. While the heavier molecular weight fraction of biooil can be upgraded using a catalytic hydrotreatment or hydrodeoxygenation followed by a dealkylation method. Furthermore, components in BCO responsible for coking can also be explored to enhance steam reformation/gasification. Lastly, the integration of the roles of catalysts in upgrading BCO will be an important step. Synthesizing hydrogenation/thermal-cracking catalysts specifically designed to handle multiple functionalities in BCO such as combination of metal and acid functionalities will contribute a pivotal role in the upgrading work of BCO.

Overall, BCO has a myriad of functionalities in this current research world. The characterization of BCO would be the stepping-stone to further developments and optimization of its use. Lastly, varying levels of separation in biooil will also contribute to the development of high quality, sustainable and economically sound second generation of biofuels.

Please Note: Members of the Sustainable Engineering Forum of AIChE are entitled to this content for free. Simply click on 'view this webcast' below and when you get to the shopping cart, your SEF membership will be recognized and your price will be ""$0"". Only AIChE members are entitled to join SEF. For more info please click here. click here
Preview Presentation:
Presenter(s):
Laura-Ann S.L. Chin
Once the content has been viewed and you have attested to it, you will be able to download and print a certificate for PDH credits. If you have already viewed this content, please click here to login.

Biolubricants Development, Formulation and Friction Test
Biolubricants have exhibited a lot of advantages over the conventional lubricants: excellent lubricity, minimizing of corrosion of metal surfaces, non-toxicity...
Bioconversion of Brown Seaweed Into Mixed Ketones Through the Carboxylate Platform Processing
The Carboxylate Platform, also known as the MixAlco TM process, is an acidogenic fermentation process using mixed culture inoculums, which offers several...