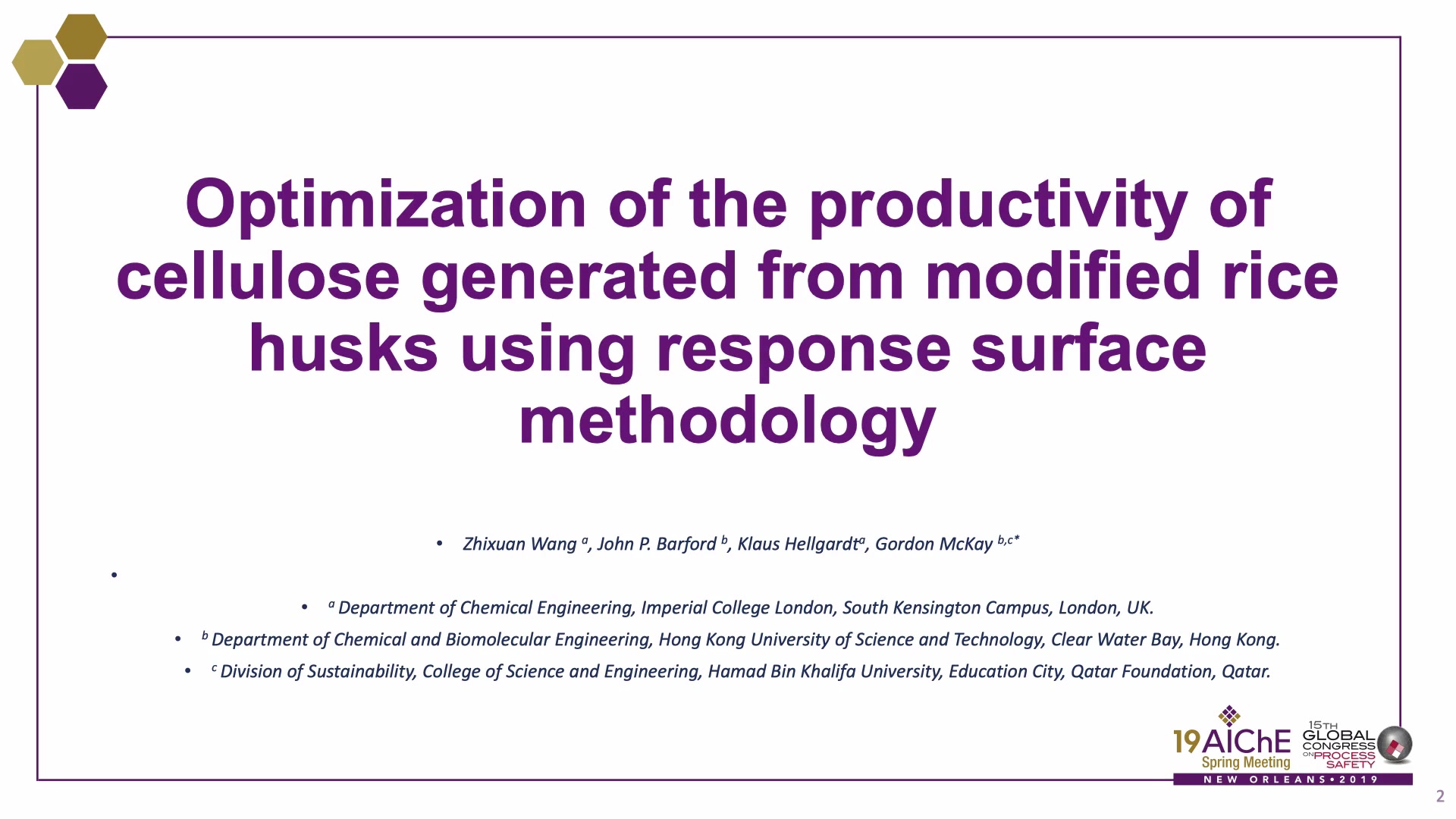 Cruse oil released into the ocean can lead to both environmental pollution of the water system and economics lost for the water purification. Rice husk is a desirable resource for extensive utilizations, such as oil sorption. However, with the high concentrations of lignin and silica, alkaline peroxide treatments have been applied to rice husks. The delignification of rice husk under alkaline peroxide condition is developed for the removal of lignin and silica. The ash content in rice husk is also considered as one of the major obstacles to biofuel generation. As the main component of ash in rice husk, silica has been known to exist as a hard shell covering and protecting the whole structure of rice husk, which can lead to process operational issues. Although a number of sporadic studies regarding the alkaline hydrogen peroxide (AHP) treatments on lignocellulosic materials in recent years, a parametric research approach applying Response Surface Methodology (RSM) has not been applied to study the delignification performance and the leaching of silica ash from rice husks. For instance previous study has used RSM to study the removal of lignin from vineyard pruning residues by AHP treatment, but because of the difference of silica concentrations in vineyard pruning residues, the silica content was unfortunately not considered as a response factor. As a statistical technique for modeling, RSM is usually used to analyze the performances of designated independent variables on selected response variables. By applying RSM designs, statistically valid results can be obtained by only conducting a limited number of experiments. With such effectiveness and popularity, RSM has been adopted widely in different fields.

In the present work, rice husks were pretreated by NaOH combined with H2O2. High Performance Liquid Chromatography (HPLC) analysis was undertaken as the basis to investigate the reaction. RSM based on Box-Behnken statistical experiment design was applied to optimize operating conditions, which are suitable for maximum lignin and silica removal while maintaining most cellulosic components in the solid residues. Hence, as a result such modified rice husk residues will turn out to be more suitable for the utilization of energy production. Three independent variables of NaOH concentration, H2O2concentration and reaction temperature were studied by using Box-Behnken design. The optimized conditions are discussed according to two different criteria. The first one focused on the productivity and the optimized conditions are 8% NaOH, 1% H2O2and 20 °C. The second one emphasized the cost effectiveness and the optimized conditions are 5.29% NaOH, 1% H2O2and 20 °C. The validation experiments additionally confirm the reliability of the predicted model.

When emphasizing the productivity, the optimized conditions are 8% NaOH, 1% H2O2and 20 °C. When cost effectiveness is included, the optimized conditions are 5.29% NaOH, 1% H2O2and 20 °C. The 50.89% actual solid yield under criteria (a) has confirmed the successful treatment when considering the initial concentration of different components in rice husk (28.21% lignin, 16.5% ash and 5.01% extractives). The effectiveness of the designed experiment suggested rice husks can be considered as a possible sorbent candidate to relieve the water pollution issue cause by oil spills.

Preview Presentation:
Presenter(s):
Zhixuan Wang
Once the content has been viewed and you have attested to it, you will be able to download and print a certificate for PDH credits. If you have already viewed this content, please click here to login.

Force to Death and New Life, Some with Programming Vitality
Regenerative medicine is the quest to provide biological or hybrid synthetic-biological materials that can enable or facilitate therapeutic interventions ,...
Milking Lipids From Green Alga: Feasibility of Using Biocompatible Solvents to Extract Lipids From Living Cells
A key hurdle in realizing commercial-scale production of biodiesel from cultured algae is efficient harvesting/dewatering of algal cells. In order to produce a...