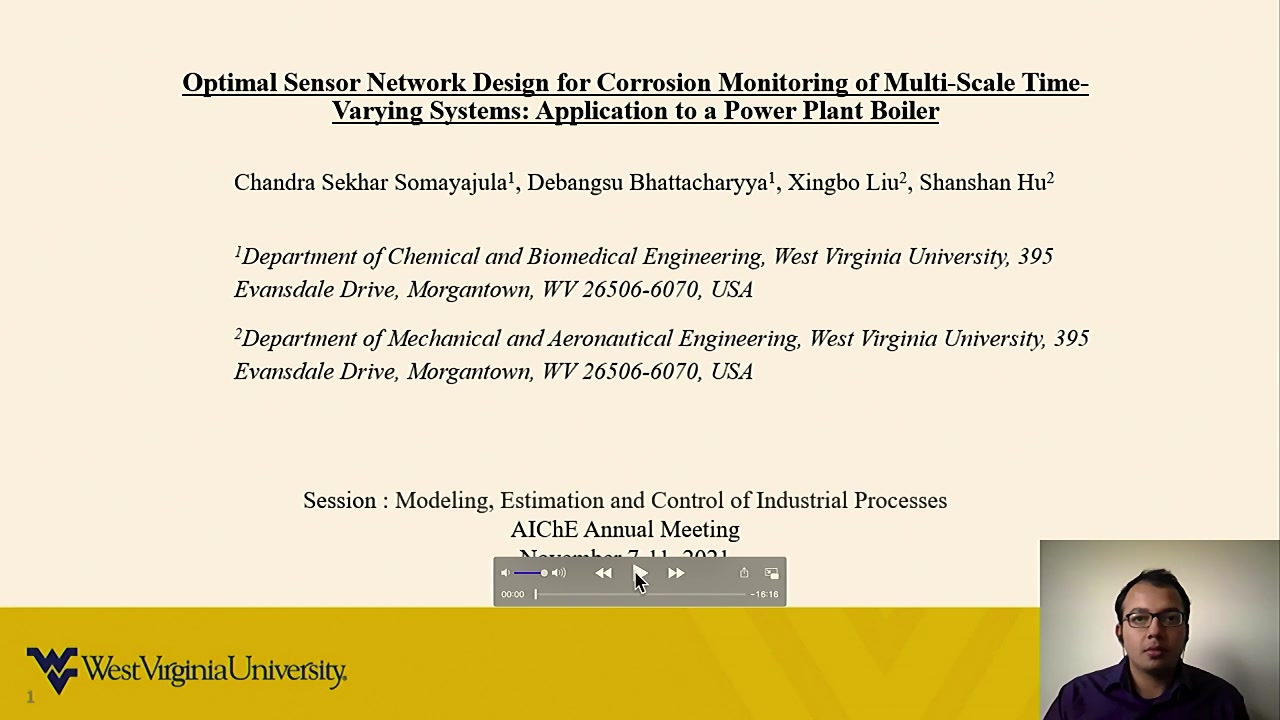 Hot corrosion can lead to undesired and unexpected outages of critical equipment items. Therefore, it is desired to monitor corrosion in these equipment items. Corrosion monitoring can also be helpful in devising optimal control strategies. However, due to very high operating temperature and highly erosive environment in many such equipment items, placing corrosion sensors at the desired locations is impractical given the current state of the art in measurement technology. Recently a novel type of electrochemical sensor is being developed in-house for in-situ measurement of the hot corrosion rate [1]. However these sensors are costly and difficult to install in the flame region. Furthermore, as there can be considerable spatial variation in corrosion profile in the equipment item and it is not practical to install sensors at all locations, neither it is required to install sensor at many locations, it is desired to develop an optimal sensor placement algorithm and use the sensor network for real-time corrosion monitoring.

Corrosion monitoring in the equipment items of interest include multiple times-scales. While the temperature and gas composition evolve in seconds or minutes time scale, corrosion rate involves time scales of weeks or months. Furthermore, the system is time-varying. As the material of construction changes with time due to corrosion rate, it involves different corrosion mechanisms and different corrosion kinetics. Furthermore, due to the changed materials composition and thinning of the tube, thermal properties of the material of construction also change with time. Therefore, in this work, an optimal sensor placement algorithm is developed for a multi-scale, time-varying nonlinear system.

Previously an algorithm has been developed by some of the authors of this work for optimal sensor placement for multi-scale time-varying system. [2] However, for corrosion monitoring, time scale differences are much higher. Furthermore, previous system was non-reactive. Due to the reactive corrosion process and time-varying reaction mechanisms and kinetics, it leads to a highly nonlinear system. The sensor placement algorithm is developed assuming that a bank of optimal nonlinear filters is used for estimation. Using integral normalized posterior error covariance of a multi-scale filter coupled with an adaptive sampling rate approach, the sensor network is synthesized.

The algorithm is applied to a power plant boiler that is facing higher than normal flue gas temperature due to increased load following operation. High temperature and presence of sulfur dioxide in the flue gas generated from burning of sulfur-containing coal led to hot corrosion in these power plant boilers [3]. Waterwall (WW) tubes are one of the primary components prone to such hot corrosion [4]. A corrosion model is developed as the measurement model. The model is validated using experimental data collected from an operating power plant boiler. As the metal temperature and SO2 and O2 concentrations in the flue gas vary along the WW section, and so does the corrosion rate, the sensor placement algorithm considers hundreds of candidate locations for installing the temperature, composition and corrosion sensors leading to a large-scale mixed integer nonlinear optimization problem. Performance of the sensor network is evaluated by simulating the boiler with various operating conditions as would be expected during load-following operation. It is observed that the estimation accuracy of the sensor network largely remains unaffected beyond a critical number of sensors. Performance of the estimator with the optimal network in terms of computational expense and estimation accuracy is evaluated.

Preview Presentation:
Presenter(s):
Debangsu Bhattacharyya
Shanshan Hu
Xingbo Liu
Chandra Sekhar Somayajula
Once the content has been viewed and you have attested to it, you will be able to download and print a certificate for PDH credits. If you have already viewed this content, please click here to login.

Julia - A Fresh Approach to Technical Computing
Join this meeting to learn about Julia Programming Language from Dr. Viral B. Shah, co-founder and CEO of Julia Computing "Julia is a modern open source...
Inorganic Analysis of HTC Biochar
The increase in greenhouse gas concentration, primarily due to emissions of CO 2 produced in use of fossil fuel, motivates many efforts to identify renewable...