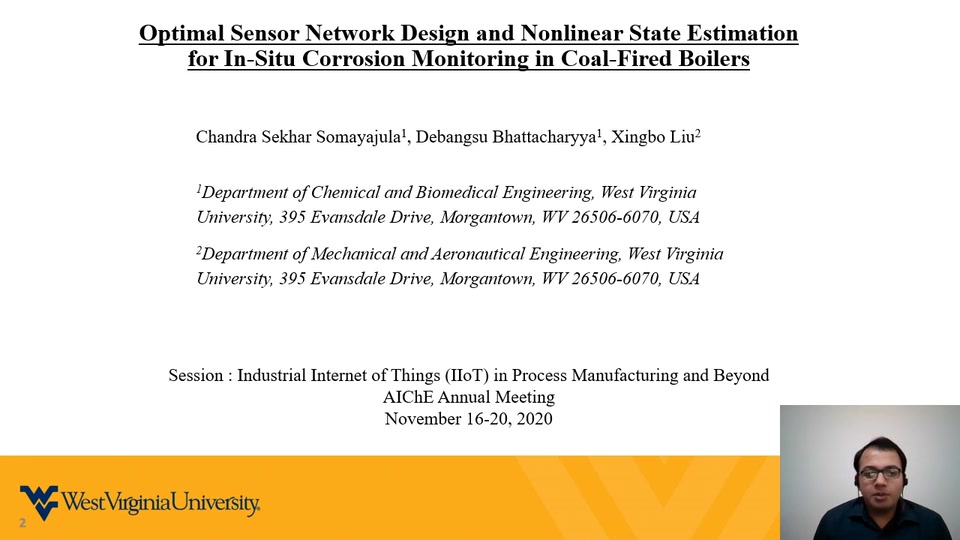 Existing coal fired power plants are increasingly being subjected to significant load-following due to the increased penetration of intermittent renewables to the grid. During load following operations maintaining the boiler environment at the desired conditions is significantly difficult. In particular, higher flue gas temperature than expected and higher concentration of corrosive sulfur species in the flue gas are causing external sulfidic corrosion especially in the waterwall (WW) tubes, which is one of the primary causes for the WW failure [1]. Experimental studies on corrosion rates of Ni-Cr alloys suggest that corrosion rate is a function of alloy composition, temperature, SO2 and O2 concentrations in the flue gas [2-3]. The effect of metal temperature on the corrosion rate is highly nonlinear with a â€œbellâ€ shaped response between 600oC and 1000oC for most of the alloys used in the WW section. Unfortunately, as of now, there is no online commercial sensor for real-time measurement of corrosion rate due to the high operating temperature and challenging environment in the WW section. Recently a novel type of electrochemical sensor is being developed in-house for in-situ measurement of the corrosion rate [4]. As the operating temperature and concentration of sulfur species greatly vary spatially and temporally in the WW, the corrosion rate can vary significantly with space and time. However, it is infeasible to install such sensors in the entire WW. Motivated by these challenges, an optimal sensor network is designed, and a nonlinear state estimation technique is developed for real-time monitoring of corrosion rate at all desired locations inside the WW.

A first-principles dynamic process model of the WW is developed for calculating the spatial and temporal variation in the temperature and concentration of sulfur species. Models are also developed for the corrosion rate. Electrochemical sensor model has been previously developed at West Virginia University [4]. This is a high nonlinear differential algebraic equation (DAE) system. Therefore, an unscented Kalman filter algorithm for DAE system is developed for state estimation, particularly for estimating the corrosion rate given the data from the electrochemical sensor.

Typically, process information which can be obtained from a given sensor network and the reliability of sensor network improves as the number and/or the accuracy of the installed sensor increases. However, it is neither feasible nor necessary to install sensors at all desired locations. An optimal sensor network is designed by minimizing the posterior error covariance of the optimal estimator. The algorithm provides the optimal number, location and type of sensors.

The optimal sensor network is used to estimate the corrosion rate for a coal-fired boiler. A number of operating scenarios are simulated by changing the temperature in the WW and concentration of the sulfur species. Our work shows that even in the presence of large mismatch between the process and the model and high measurement uncertainty, the sensor network provides satisfactory spatial and temporal resolution of the corrosion rate under aggressive load-following operation.

Preview Presentation:
Presenter(s):
Debangsu Bhattacharyya
Xingbo Liu
Chandra Sekhar Somayajula
Once the content has been viewed and you have attested to it, you will be able to download and print a certificate for PDH credits. If you have already viewed this content, please click here to login.