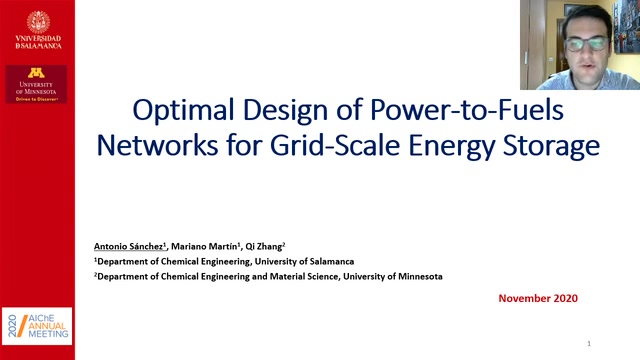 The penetration of renewable energy, especially from solar and wind, into the electricity supply mix has been increasing steadily and rapidly over the last two decades. However, the high level of spatial-temporal variability in the availability of solar and wind still poses a major challenge and hinders the complete replacement of fossil fuels by renewable energy sources. Large-scale energy storage is key in overcoming this challenge. While many energy storage technologies exist (Gúr, 2018), including pumped-hydro and ion-lithium batteries, most have shortcomings in terms of scale, cost, or potential expansion capacity. More recently, the production of chemicals that can serve as energy carriers from renewable electricity, also referred to as power-to-fuels, has received significant attention. Due to their relatively high energy density and the ease of storage and transportation, such chemicals have the potential to serve as grid-scale energy storage and help mitigate the effects of intermittency and distributed availability of solar and wind.

In this work, we address the design of a supply network of power-to-fuels plants to meet given base load electricity demand across a set of geographical locations. Here, we only allow the use of solar PV panels and wind turbines as energy collection units. The synthesis of the following four chemicals is considered: methane, methanol, dimethyl ether (DME), and ammonia, which exhibit different characteristics in terms of energy density and feasible transportation modes. The first three chemicals are produced from hydrogen and carbon dioxide. Ammonia is a carbon-free energy carrier and can be produced using hydrogen and nitrogen. The main technical challenge in this supply chain design problem is the intermittency in the renewable energy availability, which demands that detailed production scheduling is also considered in the design of the production plants (Zhang et al., 2019). To this end, we have developed a mixed-integer linear programming (MILP) model that integrates design and operational decisions at the supply chain and site levels. We further propose a two-phase heuristic solution algorithm for solving large instances of the MILP.

The proposed framework has been applied to a specific region in Spain where the decarbonization of the power grid has a special incidence (around 1800 MW of coal-based power generation is expected to be decommissioned in the next few years). Using real-world data, the near-optimal locations of the production plants and energy storage capacities have been determined, along with the production and distribution plans for a full year. The results demonstrate the benefits of using chemicals as energy storage at the grid level.

Preview Presentation:
Presenter(s):
Mariano Martin
Antonio Sanchez
Qi Zhang
Once the content has been viewed and you have attested to it, you will be able to download and print a certificate for PDH credits. If you have already viewed this content, please click here to login.