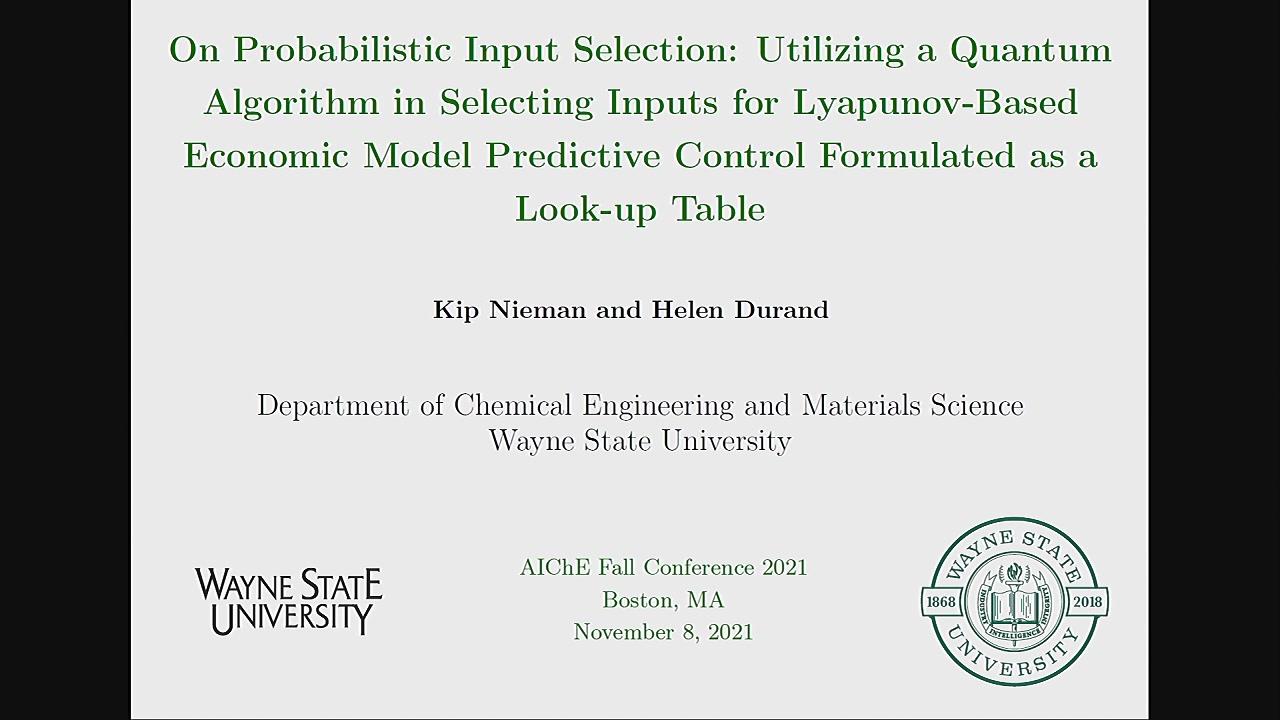 As a preliminary step toward addressing these considerations, this talk will focus on the use of a model predictive control algorithm, where the state measurement to controller output relationship is formulated as a lookup table (despite the computational complexity of this; i.e., this preliminary study on the potential interactions between probabilistic control actions generated by a quantum computer and closed-loop stability considerations will neglect questions regarding the practicality of model predictive control formulated as a look-up table). Due to its strong stability and feasibility properties, we will select the specific model predictive control algorithm known as Lyapunov-based economic model predictive control (LEMPC) [5]. We will formulate the LEMPC problem as a search problem â€“ given a state measurement, the corresponding control action must be located in the lookup table. Formulating the LEMPC problem in this context enables us to consider that the search for the correct control action from the lookup table is performed on a quantum computer, facilitated by Groverâ€™s Search Algorithm. Though the use of Groverâ€™s Search Algorithm in this context may not be necessary to locate the appropriate control action on a quantum computer, the use of this algorithm as part of the strategy will enable the probabilistic nature of a quantum computation to interact with the determination and application of an optimal input to the process.

The initial step toward developing this LEMPC formulated as a look-up table for a quantum computer is to consider that both the state measurement and the actuator output can only be known to fixed precision. This enables both to be represented as finite strings of binary digits of fixed length for application of Groverâ€™s Search Algorithm. Initially, we will review the stability conditions required for lookup table LEMPC with fixed precision for the state measurements and actuator outputs in the case that the control actions are computed on a classical computer. Then, we will analyze the case that the control actions are selected from the lookup table using Groverâ€™s Search Algorithm. To treat the stochasticity, we will consider that the inputs are bounded, so that the (potentially undesired) input cannot be arbitrarily bad. We will explore how the selection of the input using these probabilistic computing methods impacts closed-loop stability considerations, and will also discuss the manner in which noise in the quantum circuits themselves [6] can play a role in the stability results. Finally, we will discuss the potential of other available quantum algorithms for application in a control context.

Preview Presentation:
Presenter(s):
Helen Durand
Kip Nieman
Keshav Kasturi Rangan
Once the content has been viewed and you have attested to it, you will be able to download and print a certificate for PDH credits. If you have already viewed this content, please click here to login.

Relative Benefits Between Various Drivers for the Main Refrigeration Compressors for LNG Application
The main refrigeration compressors in an LNG plant are consuming a lot of energy. The selection of the driver is a key decision and influences the future...
Statistical Quality Control Charts
Improve quality control of your processes and save time and money by avoiding unnecessary operational changes. This eLearning course will equip you with the...