On the Modeling of Oral Drug Delivery 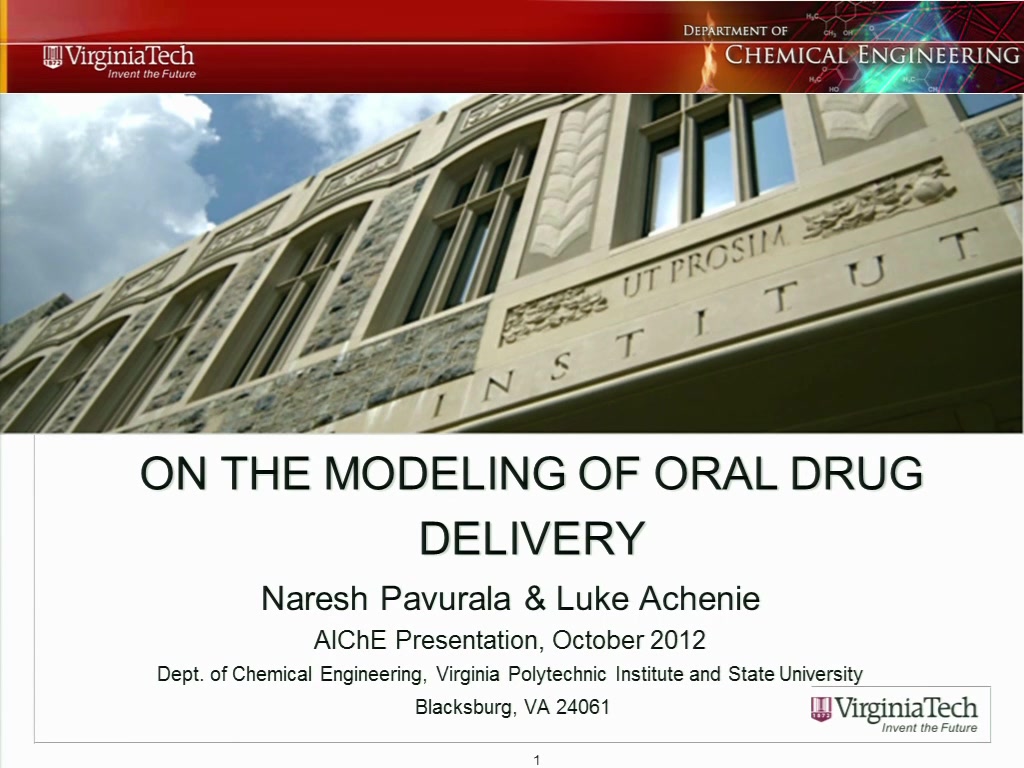 On the Modeling of Oral Drug Delivery

The oral administration route is by far the most common way of administering pharmacological substances. It is estimated that 90% of all medicines are oral formulations and oral drug delivery systems comprise more than half the drug delivery market. The core business of the pharmaceutical industry is to discover, synthesize and bring to market new drugs for health interventions. The acceptance of the drug depends on several factors including the efficacy/selectivity of the drug and the drug delivery vehicle. By following good manufacturing practices (GMP regulations), high quality oral delivery products are prepared in a reliable and reproducible manner. In oral drug delivery the challenge is for the drug active to be released in a controlled way from the solid tablet into the blood circulatory system in order to maintain the therapeutic blood plasma concentration levels for a desired amount of time. In the current literature, there is consensus that a good computational model is needed to predict the drug release into the blood plasma. This would help in reducing the expense, time and effort involved in drug design. In this paper we present a composite computational model for an oral drug delivery system involving a drug active within a solid polymer matrix.

We employ a modified form of the drug release model proposed by Balaji and Peppas (Narasimhan and Peppas 1997) based on the following assumptions. As the polymer matrix comes into contact with bodily fluid (modeled as water) inside the digestive system, it penetrates the polymer matrix; the latter then swells forming a gel layer. Drug molecules are released through the gel layer into the digestive system, crossing the enterocyte membrane into the blood stream. In our strategy, we envision two stages in the transport of drug into the blood. This involves coupling the drug release model with a compartmental absorption and transit model (CAT, see for example (Yu and Amidon 1999). The drug release model (Stage 1) is a moving boundary problem consisting of PDEs (partial differential equations) and ODEs (ordinary differential equations) which describe the diffusion of (i) bodily fluid into the drug tablet; (ii) drug out of the tablet; (iii) polymer chains through a boundary layer. The model accounts for two moving interfaces (namely, tablet/gel interface and gel/bodily fluids interface in the digestive system).

In the CAT model (Stage 2), the gastrointestinal tract is divided into a number of compartments representing the stomach, small intestine, colon and the enterocyte membrane. Specifically it is a system of ODE's with linear transfer kinetics and nonlinear metabolism/transport kinetics, which describe absorption and transit of drug through three kinds of compartments, namely unreleased, released and dissolved. The model takes into account physicochemical properties such as pKa, solubility, particle-size, particle density, and permeability. It also accounts for physiological factors such as gastric emptying, intestinal transit rate, first pass metabolism, and luminal transport. Finally the model accounts for factors such as the shape and size of the tablet and the dosage. The coupling of the two stages leads to a complete pharmaco-kinetic model for predicting the drug release profile. We have successfully developed a pharmaco-kinetic model by coupling the working models for Stage 1 and Stage 2 and combined it with an optimization model to predict system variables (e.g. tablet geometry, size and dosage). This would yield plasma concentration profiles within the therapeutically acceptable range.

We are currently working on a triphasic release profile (Rothstein and Little 2011), comprising of an initial burst, lag phase and final release of the drug. This study aids in controlling the different phases of drug release through optimization. The advantage of the suggested framework is that it can be used to test hypothesis about the mechanism involved in drug delivery into the blood circulatory system. We expect to employ the composite model to hypothesize the optimal diffusion coefficient (and other physico-chemical properties) that a new drug needs in order to obtain a desired drug release profile. This is expected to be useful for drug design.

Narasimhan, B. and N. A. Peppas (1997). "Molecular analysis of drug delivery systems controlled by dissolution of the polymer carrier." Journal of Pharmaceutical Sciences 86(3): 297-304.

Preview Presentation:
Presenter(s):
Naresh Pavurala
Once the content has been viewed and you have attested to it, you will be able to download and print a certificate for PDH credits. If you have already viewed this content, please click here to login.

Chemical Reactivity Management
Could there be potential reactive hazards in your facility you’re not aware of? Don’t let undesired reactions lead to uncontrolled situations and reactive...
Quality by Design Approach to Pharmacokinetic Modeling. A Case Study On Cyclosporin A
Drug dose response experiments in animals provide invaluable information about the pharmacokinetics and pharmacodynamics of new therapeutic agents. The drug...