On-Line Studies of Pd Based Sorbents for the Removal of Gaseous Metal Contaminants: Capture and Regeneration | AIChE
Skip to main content

On-Line Studies of Pd Based Sorbents for the Removal of Gaseous Metal Contaminants: Capture and Regeneration 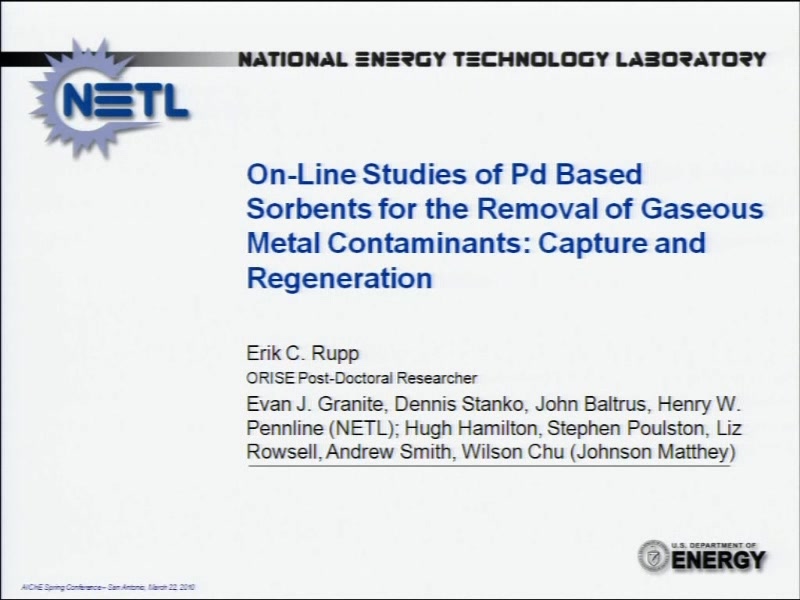 The Integrated Gasification Combined Cycle (IGCC) is a promising technology for the future use of coal to provide clean energy in a more efficient manner. During this process, many of the trace elements present in coal are volatilized, and remain in the gas phase through the gas turbine, only to be released in the resulting flue gas. Trace metals are of particular environmental concern, and thermodynamic studies have indicated that Hg (as elemental Hg), Se (as hydrogen selenide, H2Se) and As (as arsine, AsH3), as well as P (as phosphine, PH3) will be present as gaseous metal species. While mercury has long been of concern, there is increasing evidence that the other trace metals will have a significant environmental impact if coal continues to be a primary source of energy as expected. It is desirable to have regenerable sorbents for the removal of trace contaminants from high temperature syngas, in order to preserve the high thermal efficiency of the IGCC Process. While a number of sorbents, catalysts, scrubber solutions, and irradiation techniques have been developed for the capture of mercury, including activated carbons, Thief Process carbons, wet scrubbers, precious metal catalysts, and ultraviolet light at 253.7-nm, these sorbents and techniques will likely show limited capability when exposed to the other trace metal contaminants at elevated temperatures. In this study, Pd-Al2O3 sorbents have been studied under a variety of relevant conditions.

The 350-minute sorption capacity of sorbents with several different Pd loading capacities, and at 3 relevant temperatures, were studied using a 10 mg packed bed column, followed by digestion and analysis using ICP-AES. The sorbent were characterized after exposure to the contaminants was observed using XRD and XPS. Breakthrough curves for each of the contaminants were developed on 20% Pd/Al2O3 to demonstrate complete removal, and on 2% Pd/Al2O3, to determine maximum loading capacity, using real-time analysis of removal using a commercial GC/ion trap MS system. The influence of multiple contaminants was explored by performing breakthrough curves with multiple contaminants present. Thermal regeneration of the used 2% Pd/Al2O3 sorbents at 550°C, has also been studied.

Preview Presentation:
Presenter(s):
Erik C. Rupp
Once the content has been viewed and you have attested to it, you will be able to download and print a certificate for PDH credits. If you have already viewed this content, please click here to login.

One-Body Hybrid Solid Packing for Sorption-Enhanced Water Gas Shift Reaction
The interest in hydrogen , regarded as a new clean energy carrier , has been increasing with the expectation for the upcoming hydrogen economy. In the hydrogen...
Development of a Butanol Fuel Processor for Person-Portable Fuel Cell Power Systems
A novel partial oxidation (POX) catalyst and butanol-to-hydrogen fuel processor sub-system concept have been developed to fill the need for person-portable...