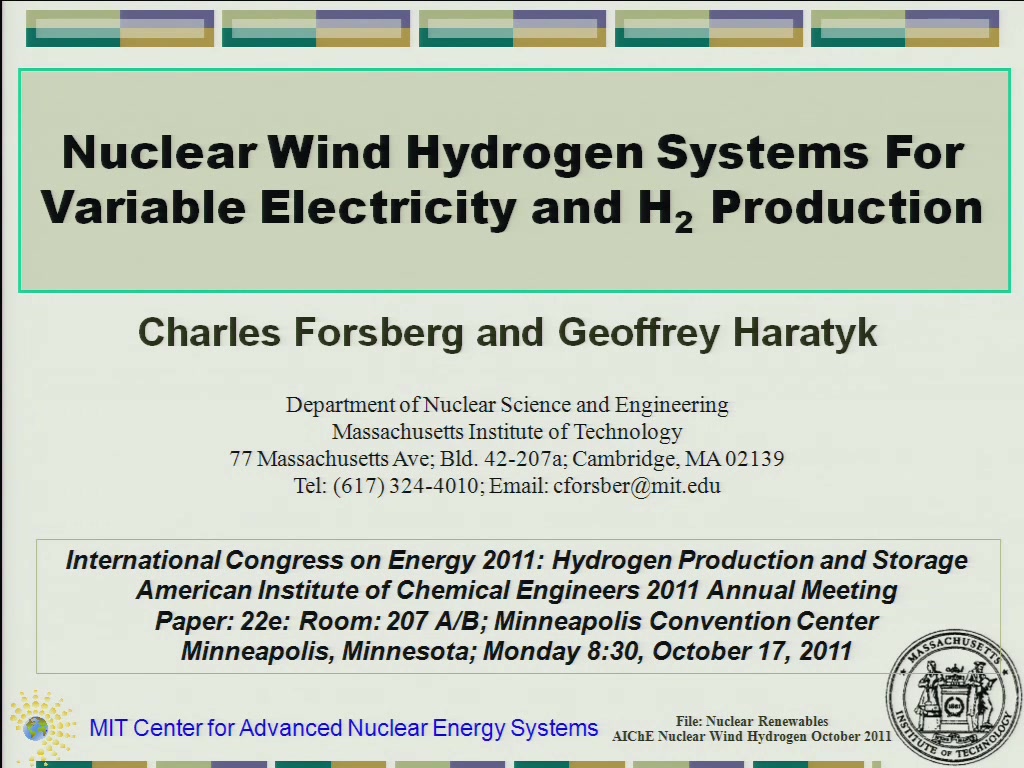 In a low-carbon world, the primary energy sources will be nuclear and renewables. Both energy sources are capital intensive with low operating costs; thus, such plants should be operated at maximum capacity. However, the outputs of these facilities do not match the demand for electricity. In the United States, renewable energy outputs are seasonal with high wind conditions in the spring and high solar outputs in the summer. There is a massive mismatch between potential production and demand. Last, the cost of renewables is highly site dependent with the potential for low-wind costs on the upper Great Plains and solar in the southwest.

To address these challenges we have been investigating the economics of a nuclear wind hydrogen system with the capability of meeting variable electricity demand and producing constant-output pipeline hydrogen for refineries and other industrial applications. The goal is to develop an economic system. Based on analysis of the Midwest electrical grid using actual electricity demand data and measured local wind conditions, such a system may be possible if reasonably priced high-temperature electrolysis systems (HTE) are developed, these systems can operate reversibly as fuel cells for peak electricity production and the cost of wind systems continues to decrease.

We chose for economic analysis the Midwest electrical grid. First, the upper Midwest has some of the best wind conditions in the United States and thus the lowest cost wind. Second, there are large hydrogen markets in the refineries near Chicago and in Alberta. In this system there are two markets for hydrogen (peak electricity and refineries) with different characteristics.

The proposed system is shown in Figure 1. It produces two products: variable electricity on demand and hydrogen for industrial customers. The primary product is electricity. The base-case system consists of the following components.

Three components of this system have high capital costs: nuclear plants, wind turbines, and hydrogen pipelines. For viable economics, these systems must operate at high capacity factors. Hydrogen storage is cheap. HTE is in the developmental stage and has the potential to be a low cost technology. We undertook and economic assessment of this system under a variety of conditions for the Midwest electrical grid but always using actual electricity demands and wind conditions. Our economic assessment came to several conclusions.

The details of the assessment are in the paper.

Preview Presentation:
Presenter(s):
Charles W. Forsberg
Once the content has been viewed and you have attested to it, you will be able to download and print a certificate for PDH credits. If you have already viewed this content, please click here to login.