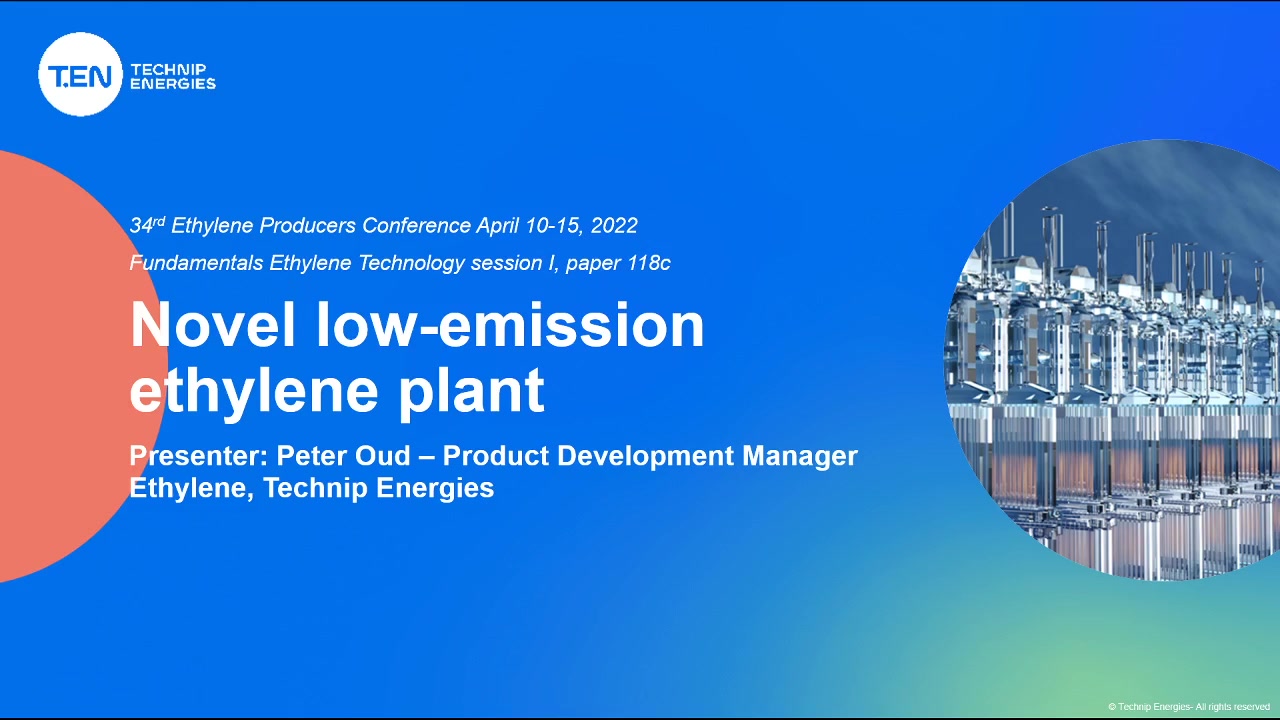 Global warming and CO2 reduction are taking center-stage and this is driving the ethylene industry to look for economically viable ways to reduce its emissions. Last year Technip Energies presented the low-emission cracking furnace paper and also introduced the first stage of the low-emission ethylene plant demonstrating how this proprietary furnace technology can be implemented.

This paper extends the low-emission ethylene plant concept presented last year with two additional stages for reducing CO2 emissions, to allow the ethylene plant to cost-effectively run on green hydrogen as fuel. This is an alternative for running the plant on blue hydrogen as will be presented in a separate paper by Nick Rogers.

The green hydrogen-based ethylene plant concept presented in this paper offers CO2 emission reduction by more than 50 percent without the need for carbon capture, which would certainly be of interest for those ethylene producers that have no access to a carbon capture and storage infrastructure. CO2 emission reductions are from improved energy efficiency and phasing out fossil fuels firing.

The first stage of the concept utilizes the methane rich excess fuel gas made available by applying low-emission cracking furnaces instead of conventional ones to replace major steam turbines by electric motors. Firing this fuel gas in a combined cycle power plant (CCGT) instead of the cracking furnaces increases net power production due to the substantially higher heat-to-power conversion level in a CCGT compared to that of a conventional ethylene plant. In addition to maintaining a secured plant power supply, this also enables the export of generated excess power. Alternatively, excess fuel can be exported to displace fossil fuels and power with a low carbon foot print can be imported.

The second stage introduces renewable energy to further reduce the plantâ€™s emissions. This is used to significantly extend the power export to the external grid by up to 50 percent. One of the main issues to be dealt with is that it is difficult to handle the intermittent nature of renewable power and it storage. This issue is solved by temporarily storing the ethylene plantâ€™s excess fuel production and converting it to power at high efficiency in the CCGT during periods when there is a renewable power deficit. By storing the fuel surplus, within the premises or externally by the fuel grid manager, the ethylene plant can be used to support the introduction of renewables to the power grid by providing an efficient power-to-gas solution.

The final stage uses green hydrogen, produced from water by electrolysis, to fire as fuel in the cracking furnaces, thus substantially increasing the fuel gas surplus. For the generation of hydrogen, renewable power is used. Compared to the flow sheet of Stage 2, a 100 percent increase of exported power is feasible on a continuous basis. The fluctuations in the renewables are handled by the CCGT and the fuel storage. The CCGT can be run at its optimal design point on a continuous basis. This operation allows the CCGT to operate essentially full-time at an optimum heat-to-power efficiency allowing the CO2 emissions to be minimized.

An economic evaluation shows that this green hydrogen-based ethylene plant concept presented herein demonstrates how low carbon ethylene production can be achieved without major impact on the operating margins. In a favorable economic environment, with relatively cheap renewable power and medium to high carbon credits, these can even improve substantially, providing enough margin to support the necessary investments. This concept can be used to make renewable power suitable for export to the grid and for phasing out fossil fuels. It is particularly suited for regions with abundant sources of renewable power available to provide a mix of these with a high daily availability. Using a minimal amount of green hydrogen, a more than 50 percent reduction of the CO2 emission level is feasible with the fully implemented concept covering both the ethylene plant direct emissions and the emissions related to firing the excess fuel gas in the power plant.

Preview Presentation:
Presenter(s):
Peter Oud
Once the content has been viewed and you have attested to it, you will be able to download and print a certificate for PDH credits. If you have already viewed this content, please click here to login.