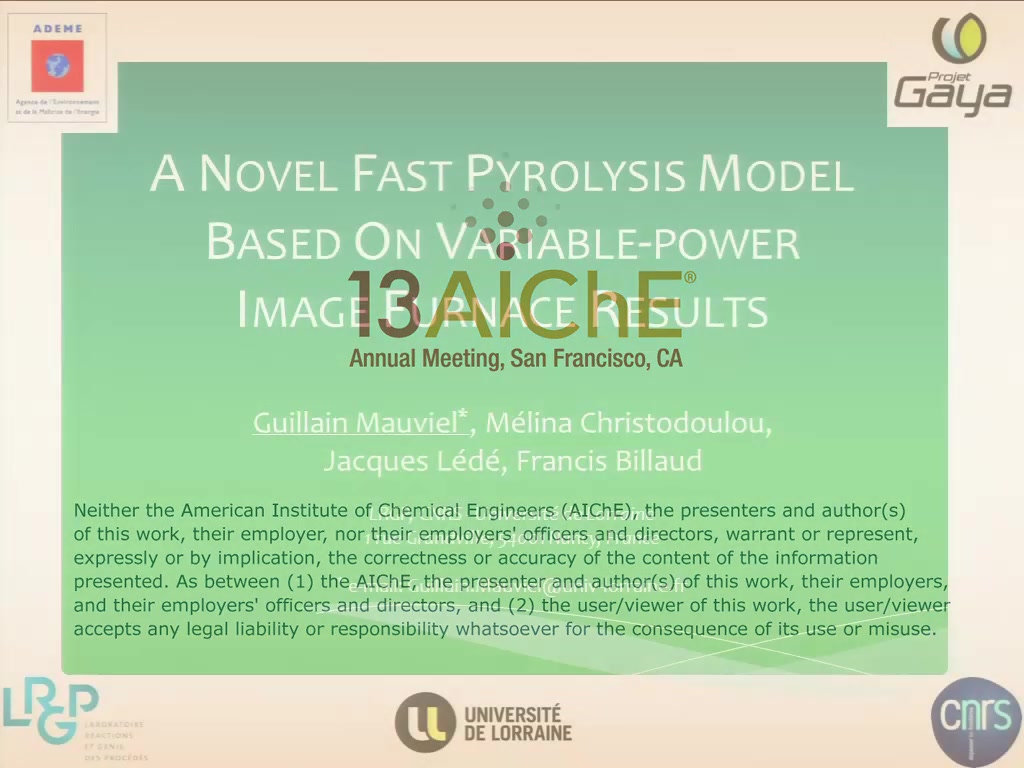 Nowadays, ligno-cellulosic biomass is considered as a renewable carbon resource. It represents a relevant alternative to reduce greenhouse gases emissions. During last decades, many scientists and industrials have been interested in thermochemical conversion of biomass such as gasification. In order to accurately model the gasifiers, it is important to study the implied thermochemical phenomena (such as pyrolysis), through dedicated experiments close to the industrial conditions. This communication presents the model developed by LRGP to describe primary pyrolysis in bubbling fluidized beds conditions, one of the major technologies used for biomass gasification. The novelties of this proposed model are the coarse description of the 3 main products (gas, vapours, char) and the conservation of the 3 main biomass elements: carbon, hydrogen, oxygen. The work is part of the Gaya project, led by GDF Suez and funded by ADEME. Gaya project will contribute to develop a new gasification demonstration platform in Europe for SNG production.

The experimental setup used to adjust the pyrolysis model is a vertical image furnace [Christodoulou & al 2012]. The principle is to concentrate the radiation of a xenon arc lamp on a biomass sample. The lamp is settled at the first focus of an elliptical mirror. The light beams are concentrated at the second focus where the biomass sample is placed inside a transparent reactor. In order to prevent any gas-phase secondary reactions, the volatile matter (vapours and gases) released during the reaction is quenched by a controlled flow of nitrogen at room temperature. During a flash time, the temperature evolution is measured by pyrometry on both sides. As soon as the light beams are switched off, all the pyrolysis products can be recovered, allowing achieving complete mass balances. Gases are collected in a sampling bag, liquids are condensed and aerosols are trapped in a filter. The solid residue remains on the sample holder in the reactor. All these products are analysed off-line. The heat flux density applied to the biomass can reach 650 kW m-2. This is the maximum value encountered by wood particles surrounded by hot bed particles in fluidized bed gasifier. The heat flux density is decreased over time in order to reproduce the thermal story of a wood particle injected inside a fluidized bed.

The single biomass particle pyrolysis model which has been developed is one dimensional and based on a classical simple reaction scheme: three competitive first-order reactions [Chan & al 1985, Al-Haddad & al 2010]. The model numerical resolution allows computing the three main products yields and the temperature gradient inside a wood chip. The kinetic and stoichiometric parameters of this model are fitted thank to the experimental data obtained with the image furnace (temporal evolution of gas / char / water / organic vapour yields, gas composition, solid residue ultimate analysis). The interest and originality of this model is to rely on the establishment of atomic balances for all products. It permits to describe the gas molecular composition, a global atomic composition of tar and a spatial (along the thickness) atomic composition of the char. The comparison between the experimental data and simulated results for a cylindrical pellet will be shown. The extrapolation capacity of this model will be assessed.

Preview Presentation:
Presenter(s):
Guillain Mauviel
Once the content has been viewed and you have attested to it, you will be able to download and print a certificate for PDH credits. If you have already viewed this content, please click here to login.

Cracker Feedstock Changes: From Naphtha to Ethane Cracker
Driven by the US shale gas boom, cracking ethane to ethylene became more attractive than cracking liquid feedstocks in the last years. Therefore owners of...
The Selection of the Right Dry Gas Seal and Latest Supporting System Design to Obtain Optimum Compressor Reliability
Abstract Today’s plants have increasing responsibility for improving reliability and safety standards within their respective area. As today's oil and gas...