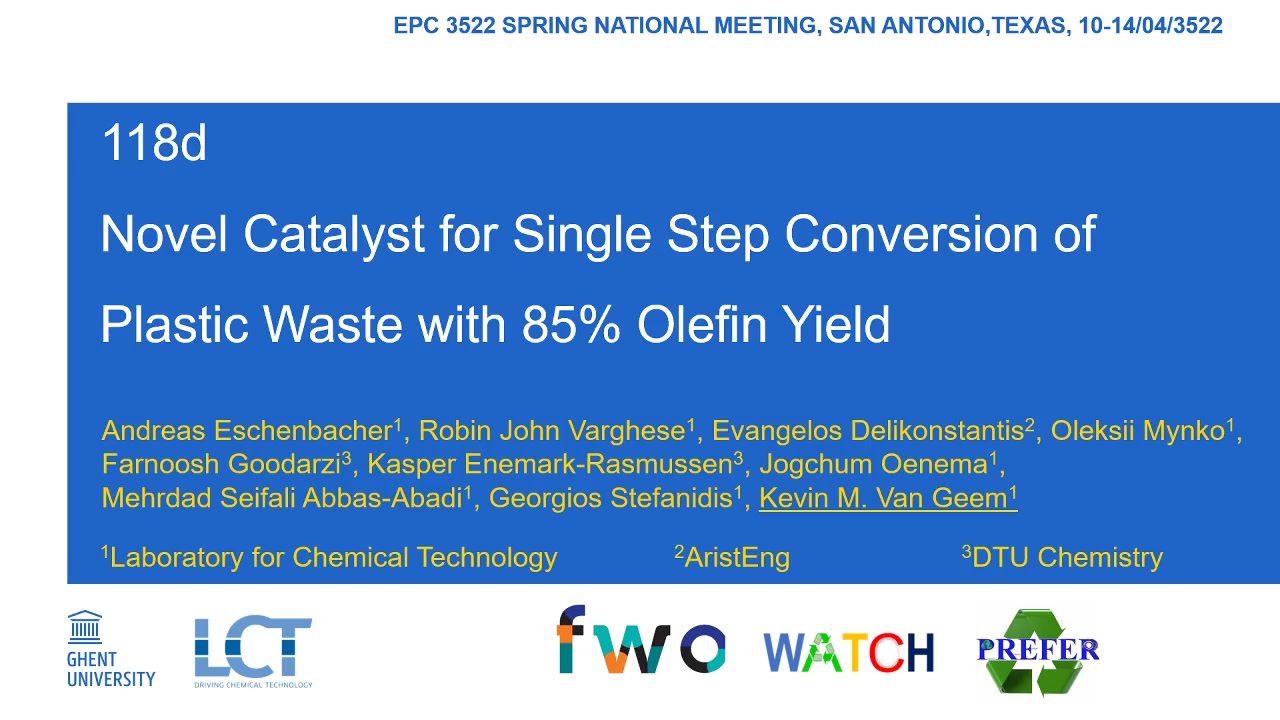 The interest in the chemical recycling of plastic waste via thermochemical processes such as pyrolysis is on the rise since it bears the potential to promote a carbo-circular economy, limiting further sourcing of fossil resources. Within this study, the pyrolysis of polyolefinic waste streams was investigated to recover valuable base chemicals for the production of polyolefins, such as light olefins and monoaromatics, in a circular fashion at high selectivity. As a catalyst for upgrading the pyrolysis vapors, HZSM-5 with different properties, affected by different Si/Al ratios, incorporation of mesopores (via desilication), stabilization with phosphorus, and steam-treatment, were characterized using 27Al, 29Si, and 31P NMR, NH3-TPD, Pyridine FTIR, XRD, and physisorption. Different feeds, (virgin and post-consumer), catalyst/feed ratios, and reaction temperatures using a micropyrolysis reactor coupled to two-dimensional gas chromatography.

After a steam-treatment at 800 °C, a phosphorus-stabilized microporous HZSM-5 and its desilicated version showed high selectivity for production of valuable base chemicals when upgrading pyrolysis vapors at 600 °C, with ~85% C2-C4 olefins and ~5% aromatics produced from virgin PE. Increasing the reaction temperature from 600 to 700 °C, increased the aromatics yield to ~10 wt. % while producing similarly high overall yields of C2-C4 olefins, with increased yields of ethylene and 1,3-butadiene at the expense of propylene and C4 olefins. The coke yield for these severe cracking conditions was 1 wt. %. Processing post-consumer mixed polyolefin resulted in 5-10 wt. % lower olefins yield than using virgin PE but produced ~5 wt. % more aromatics due to its contamination with PS and PET. While parent HZSM-5 rapidly deactivated for repeated runs owing to its high coking propensity, phosphorus-modified and steamtreated HZSM-5 showed almost no deactivation during 130 runs with stable conversion towards C5+ aliphatics and high C2-C4 olefins selectivity with a 70% reduction in coke deposition.

Preview Presentation:
Presenter(s):
Kevin M. Van Geem
Once the content has been viewed and you have attested to it, you will be able to download and print a certificate for PDH credits. If you have already viewed this content, please click here to login.