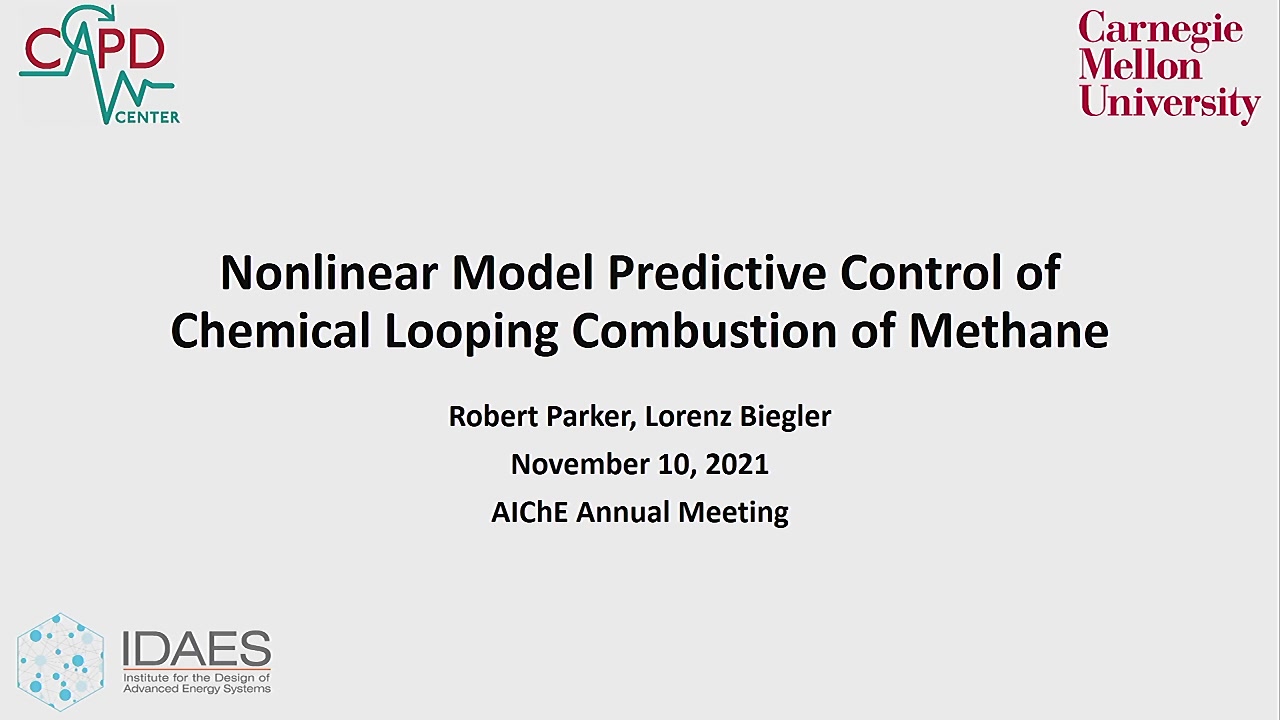 Chemical looping combustion (CLC) is an advanced combustion strategy for power generation in which a hydrocarbon fuel is converted to carbon dioxide and water via gas-solid oxidation and reduction reactions with a metal-oxide oxygen carrier. CLC reactors process air and fuel streams separately, leading to a carbon dioxide-water outlet stream that is conducive to carbon capture and sequestration. For such a technology to be competitive in an increasingly dynamic electric power ecosystem, reactors need to be able to start up, shut down, and change operating setpoints efficiently. Efficient and stable dynamic operation of this process requires a model that captures its nonlinear dynamics and a control strategy capable
of exploiting such a model. We model the CLC reactors as systems of nonlinear partial differential and algebraic equations (PDAEs), where differential equations are mass and energy balances and algebraic equations
are due to thermodynamics, hydrodynamics, transfer correlations, and reaction kinetics. Our control strategy is nonlinear model predictive control (NMPC), in which control inputs are calculated at every measurement sample by solving a nonlinear program (NLP) subproblem for optimal control over a finite horizon. NMPC is a versatile control strategy with favorable theoretical properties such as stability and robustness, but real-world implementation is not widespread, in part due to the difficulties associated with creating and maintaining first principles-based nonlinear chemical process models and formulating tractable NLP subproblems, especially for highly nonlinear, poorly scaled models such as CLC reactors.

This work presents our approach to modeling, formulation, and solution of NMPC problems for CLC reactors. In previous works, the Control and Adaption with Predictive Sensitivity Enhancements (CAPRESE) framework was presented, which facilitates the solution of NLP subproblems by automating tasks such as steady state setpoint calculations and NLP initialization. We present updates to CAPRESE including compatability with the Institute for the Design of Advanced Energy Systems framework for process systems engineering (IDAES), which allows users to perform NMPC simulations on models constructed from the IDAES unit and property model building blocks.

Even if dynamic models may be constructed easily, however, formulating a tractable NMPC subproblem may be challenging. Critical aspects of model formulation include objective weights, scaling factors, and variable bounds. We calculate these quantities by analyzing the graphical structure of model equations and variables and observe their significant impact on NLP solve times.

Finally, we pose setpoint step change control problems for chemical looping reactor models in which inlet gas and solid flow rates are manipulated variables and inlet temperatures and compositions are disturbances. Plant-model mismatch is simulated by assuming imperfect measurements and imperfect application of calculated control inputs. These problems are simulated as NMPC controllers in CAPRESE with results presented, including solve times of the NLP subproblems. State and control trajectories for preliminary NMPC simulations of a moving bed reduction reactor are presented in the accompanying figure.

Preview Presentation:
Presenter(s):
Lorenz Biegler
Robert Parker
Once the content has been viewed and you have attested to it, you will be able to download and print a certificate for PDH credits. If you have already viewed this content, please click here to login.