No Greenhouse Gas Warming in Tiny Towns in USA 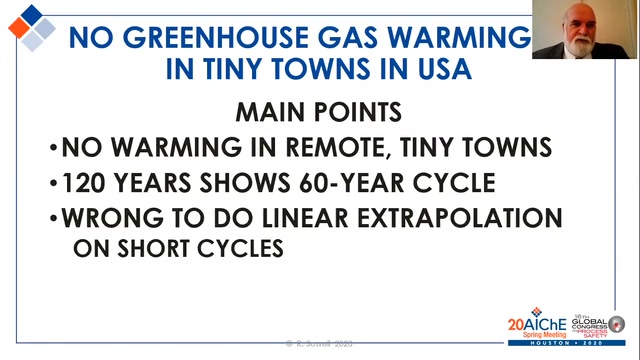 Several global analyses of world land temperatures during the past 100 years show an average warming trend of approximately 1.1 deg C (2 deg F) per century. Previous global analyses combine locations with small, medium, and large populations, adjust the results for urban heat island effects, adjust the results for spatial mal-distribution, splice together records of short duration, and infill missing data with values from other sources. The data for this paper avoids those inherent problems by analysis of only those locations with very small populations, without urban heat island effects, spatially well-distributed, without splicing effects from short records, and without adverse effects from infilling missing data. Analysis of data in NOAAâ€™s National Center for Environmental Information database of the instrumental record of air temperatures of just over 100 very small or tiny towns throughout the coterminous United States showed a trivial, or no warming trend over the period 1910 through 2018. The tiny towns selected for this study have very small population (4,700 population on average), are far from urban centers, have long records from 1910 through 2018, have almost complete data with less than 4 percent data missing (1.6 percent missing on average), and are spatially distributed across the continental United States. Data was adjusted, per convention, for measuring equipment upgrades and station moves. A cooling trend was found when the data was also adjusted for known temperature impacts that are unrelated to GHGs, including aerosols from large volcanic eruptions, El Niño and La Niña events, and severe droughts. Implications are presented for policy-makers and others with interests in climate solutions, including CCUS (carbon capture, use, and sequestration), sustainability, bio-fuels, low-carbon energy, and others.
Preview Presentation:
Presenter(s):
Roger E. McCumber
Harvey McCumber
Roger E. Sowell
Harvey Sowell
Once the content has been viewed and you have attested to it, you will be able to download and print a certificate for PDH credits. If you have already viewed this content, please click here to login.