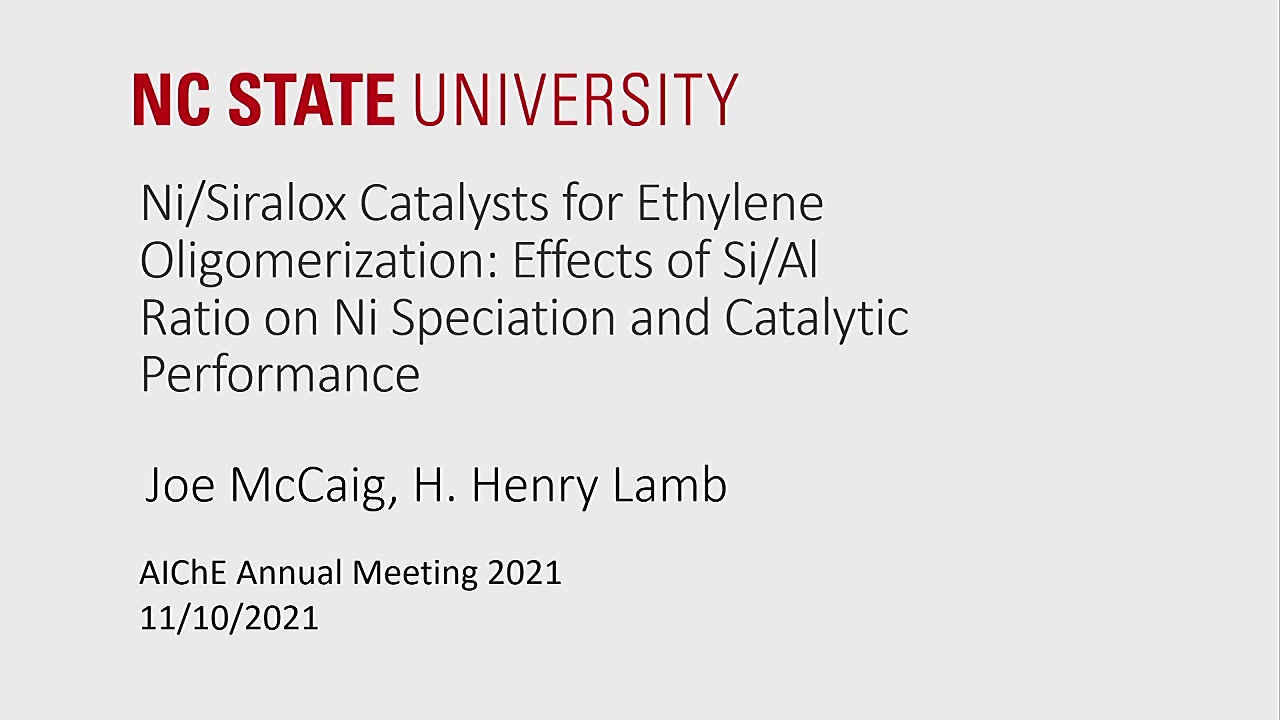 In the United States, approximately 250 billion ft3/yr of natural gas is flared at the production site resulting in an egregious waste of a finite resource and significant CO2 emissions.One potential solution is on-site modular conversion of stranded gas to hydrocarbon liquids, which can be transported by tanker. Natural gas liquids, consisting primarily of ethane and propane, are the easiest target for conversion to higher hydrocarbons. The catalytic conversion of ethane to ethylene by oxidative dehydrogenation provides a feedstock for oligomerisation to C4-C14 liquid fuels, the focus of the present work. Nickel supported on Siralox, a silica-doped alumina manufactured by Sasol, has been identified as a highly efficient heterogeneous ethylene oligomerization (EO) catalyst [1]. Ni/Siralox-30 prepared by incipient wetness impregnation (with the suffix indicating the support Si content in wt.%) has received recent attention, demonstrating high conversion and good selectivity to liquid-range oligomers. The supports are manufactured by anchoring a silica precursor to boehmite so they are essentially biphasic, with the surfaces exposing â€˜islandsâ€™ of silica or alumina (depending on which species the bulk most resembles) [2]. The effects of Si/Al ratio on Ni speciation and catalytic performance have not been investigated. Moreover, Ni/Siralox catalysts have not yet demonstrated economically viable yields of liquid hydrocarbons. Some have inferred that the active sites are isolated Ni(II) ions grafted to silanol or aluminol defects, but others have suggested coordinatively unsaturated Ni(II) ions on the surfaces of NiO nanoparticles are the active sites. Herein, we prepared Ni/Siralox-5, Ni/Siralox-30 and Ni/Siralox-70 catalysts, as well as Ni/SiO2 and Ni/Al2O3 catalysts, to elucidate the influence of support composition on Ni speciation and ultimately, EO performance. The catalysts were characterized by N2 physisorption, x-ray diffraction (XRD), diffuse reflectance infrared Fourier transform spectroscopy of adsorbed carbon monoxide (CO DRIFTS), H2 temperature-programmed reduction (H2 TPR), and NH3 temperature-programmed desorption (NH3 TPD). Initial catalyst screening was conducted in a micro-flow reactor and further testing was performed at the mini-pilot scale under industrially relevant conditions.

Siral-70, Siral-30 and Siral-5 silica-alumina hydrate powders and Siralox-30 and Siralox-70 silica-alumina oxide pellets were provided by Sasol. The Siral powders were calcined at 500°C for 4 h in air to convert them to the corresponding oxides. Herein, the calcined Siral powders are referred to as Siralox supports. Supported Ni catalysts were prepared by incipient wetness impregnation of the Siralox supports and pellets with aqueous solutions of Ni(NO3)2 (Sigma-Aldrich). The intended Ni loading was 5 wt.%, and impregnation was followed by calcination 500Â°C for 4 h in air. CO DRIFT spectra were recorded using a Bruker Vertex 70 FTIR spectrometer with Harrick Praying Mantis cell. H2 TPR and NH3 TPD, and BET analysis were performed with Micromeritics ASAP 2920 and 2020 instruments, respectively. XRD patterns were recorded with a Rigaku SmartLab instrument using Cu KÎ± radiation. ICP-AES analysis was by Galbraith Laboratories. Bench-top EO was performed in a 0.5â€ ID 316-SS continuous flow reactor at 225 oC under 10 bar ethylene using 0.25 g of Ni/Siralox powder catalyst (1.5 g/h ethylene, WHSV=6 h-1). Products were sampled on-line and analyzed with a Shimadzu 2010 GC-FID. EO was performed also with a 1â€ ID 316-SS continuous flow mini-pilot scale (MPS) reactor at 130 oC under 25 bar ethylene using 15 g of pelletized Ni/Siralox catalyst (30 g/h ethylene, WHSV=2 h-1). A condenser was placed downstream to trap liquid products which were periodically collected and analysed by a Shimadzu 2010 GC-FID. The off-gas flowrate was measured by a digital flowmeter and analysed on-line as previously described.

The supported Ni catalysts prepared by impregnation of the Siralox supports were characterized using a variety of techniques. For Ni/Al2O3, Ni/Siralox-5 and Ni/Siralox-30, the XRD patterns of the Ni-containing and bare supports were indistinguishable, exhibiting broad, low intensity peaks indicative of Î³-Al2O3. For Ni/SiO2 and Ni/Siralox-70, the (111) and (200) diffraction peaks of NiO are visible. Those supports with a majority of amorphous SiO2 at their surfaces favor the formation of NiO particles.

The reducibility of Ni species on Ni/Siralox catalysts is determined by the strength of interaction between the Ni precursor and the support. Bulk NiO was used as a TPR reference with a sharp peak at 400 oC (figure 1). Ni/SiO2 reduces with a broad peak centred at 400 oC, confirming the presence of bulk-like NiO. Considering Ni/Al2O3, the Ni precursor is highly reactive with the alumina surface during calcination, forming a surface spinel-like NiAl2O4 phase which reduces only above 700 oC [3]. We infer that Ni/Siralox-5 contains a surface-spinel similar to Ni/Al2O3. Ni/Siralox-70 exhibits TPR peaks assigned to NiO reduction, NiAl2O4 reduction, and isolated Ni(II) ions grafted to acidic silanols (peak at 550 oC) [4]. Ni/Siralox-30 shows a mixture of grafted Ni(II) and NiAl2O4, although clearly skewed towards the latter. Room-temperature CO DRIFTS spectra of the Ni/Siralox powders are presented in figure 2. Ni/SiO2, which contains bulk-like NiO particles, did not exhibit any carbonyl bands, indicating a very low dispersion. The 2184 cm-1 band in the spectra of Ni/Siralox-5 is the likely the result of the CO interacting with Ni(II) ions at the surface of the defective spinel-like NiAl2O4 [3]. Ni/Siralox-30 also exhibits the 2184 cm-1 band and a smaller component at 2200 cm-1. Ni/Siralox-70 demonstrates a main band at 2200 cm-1 and smaller component at 2184 cm-1. The 2200 cm1 peak arises from CO interacting with isolated Ni(II) sites grafted to acidic silanols [5]. The low magnitude of the peak indicates, as suggested by TPR, that only a fraction of the Ni exists in this form.

Compared to the bare support, Ni/Siralox-5 exhibits a new NH3 TPD peak at 200 oC that can tentatively be assigned to NH3 interacting with Ni(II) ions on the surface of the NiAl2O4 phase, exhibiting weak Lewis acidity. In contrast, the profiles of Ni/Siralox-30 and to an even greater extent, Ni/Siralox-70 lose TPD peak area at ~250 oC on introduction of Ni. This suggests the loss of acidic silanols after grafting with isolated Ni(II) ions.

The results of bench-top EO experiments at 225 oC, 10 bar, and WHSV = 6 h-1 for Ni/Siralox powder catalysts are displayed in figure 3, including ethylene conversion and oligomer selectivity. Ni/SiO2 and Ni/Al2O3 were inactive for EO. The 25-50 nm NiO particles exhibited by Ni/SiO2 apparently are unable or are not well enough dispersed to catalyze the EO reaction, nor are Ni(II) ions on the surface of the NiAl2O4 spinel-like phase. This explains why Ni/Siralox-5 displays only marginal EO activity. Ni/Siralox-30 and Ni/Siralox-70 are both highly active, achieving 55% and 65% steady-state conversion, respectively. Ni/Siralox-70 to our knowledge has not been reported previously as an EO catalyst. Ni/Siralox-30 and Ni/Siralox-70 contain isolated, grafted Ni(II) ions that we infer are the active sites. These catalysts displayed an approximately Schulz-Flory distribution of oligomers with high selectivity to C4 and very low selectivity to odd-numbered oligomers (reflecting the low acidity of the bare supports).

Ni/Siralox-30 and Ni/Siralox-70 pellets were tested in a MPSR at 130 oC, 25 bar and WHSV = 2 h-1 under more industrially relevant conditions. As shown in figure 4, both catalysts displayed high conversion (90%+) over 5 h time on stream (TOS). At an ethylene feed rate of 0.425 l/min (STP), the overall liquid yields were approximately 75%, and the liquid production rates were ~1.3 kg liquid/kg catalyst.h-1. These catalysts are differentiated by their oligomer selectivity. Ni/Siralox-70 demonstrated a 40% butene mass selectivity and higher selectivity to fuel-range (C6+) oligomers, whereas Ni/Siralox-30 demonstrated 55% butene selectivity. This is reflected in their respective Schulz-Flory chain growth probabilities: 0.45 and 0.27 for Ni/Siralox-70 and Ni/Siralox-30, respectively. Characterization data suggests that this is a result of the higher concentration of isolated Ni(II) ions grafted to acidic silanol defects in Ni/Siralox-70 compared to Ni/Siralox-30, which we posit to be the EO active site. Future work will focus on EO runs over longer times on stream (24h+) to ascertain the long-term stability and liquid oligomer fuel production capacity of Ni/Siralox-70.

Ni/Siralox-30 and Ni/Siralox-70 are high-performance catalysts for EO that can be employed as part of a modular gas-to-liquid process, potentially minimizing the waste of stranded natural gas resources. Under industrially relevant conditions, they demonstrate a high yield of liquid oligomers. We infer that their performance owes to the presence of isolated Ni(II) active sites grafted to silanol defects on the support surface. In general, the activity of Ni/Siralox catalysts depends on support composition, which determines Ni speciation. 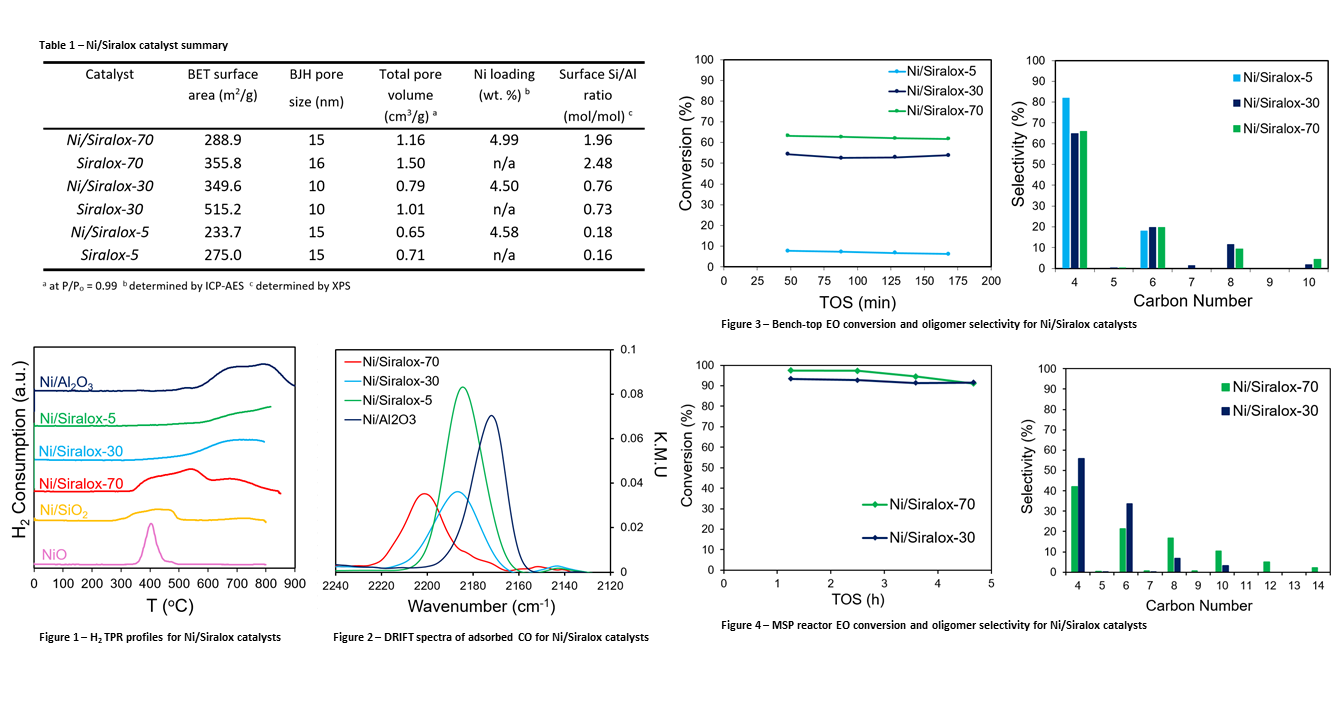 Preview Presentation:
Presenter(s):
H. Henry Lamb
Joseph McCaig
Once the content has been viewed and you have attested to it, you will be able to download and print a certificate for PDH credits. If you have already viewed this content, please click here to login.

Tailoring the Physicochemical Properties and Performance of FAU Catalysts with Heteroatoms
Heteroatom-modified zeolites have emerged as fascinating materials owing to their potential to improve both catalyst performance and stability. However,...
Solvation Dynamics and Energetics of Hydride Transfer Reactions in Cellulosic Biomass Conversion
Cellulose and its sugar derivatives need to be dissolved in a solvent for their catalytic conversion to chemicals and fuels intermediates. Experimental studies...