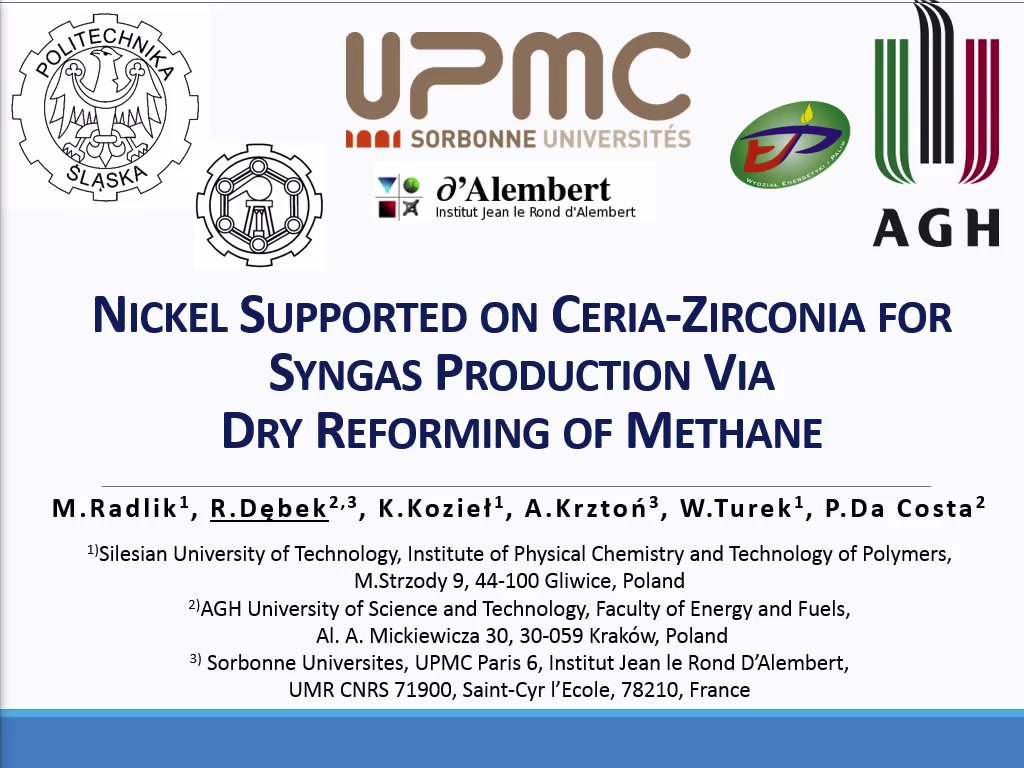 Dry reforming of methane (DRM) produces synthesis gas with higher purity and lower H2/CO ratio than either partial oxidation or steam reforming. Lower H2/CO ratio is a preferable feedstock for the Fischer-Tropsch synthesis of long-chain hydrocarbons [1,2]. Another important advantage of this method is the use of harmful for the environment greenhouse gases (CO2 and CH4) to produce hydrogen and syngas [1-3].

The typical catalysts for DRM are nickel-containing materials and noble metals (Pt, Rh and Ru. Ni-based catalysts supported on Al2O3, MgO and hydrotalcite are used more often in comparison with noble metals due to low price and satisfactory activity. However, such nickel-based catalysts exhibit certain disadvantages such as formation of carbon deposits and sintering at high temperatures. The use of oxide supports e.g. CeO2, CeO2-ZrO2, which contain mobile lattice oxygen active in removing carbon deposits and in regeneration of active sites, can improve the lifetime of Ni-based catalysts [3].

Temperature is another important factor that affects the activity and stability of Ni-based catalysts. Since DRM is an endothermic process, higher temperature improves the conversion of both CH4 and CO2, but can also cause deactivation of the catalyst due to the formation of carbon deposits. Hence, it is favourable to carry out the DRM process at low temperature (≤550 °C), which also lowers the cost of energy [3]. Until now, only few papers concerning low-temperature DRM have been published [3].

The goal of this work is to study the activity of DRM catalysts containing nickel deposited on the ceria-zirconia support in the low-temperature DRM (550°C). A particular attention has been devoted to the influence of variable nickel loading and the temperature on the amount of hydrogen produced and the value of the molar ratio H2/CO.

The catalysts containing 2,4 and 10 wt. % of nickel were prepared by the impregnation of commercial ceria-zirconia support (Ce0.62Zr0.38O2, Rhodia Electronics & Catalysts) with aqueous solutions of nickel nitrate. The obtained catalysts were dried and calcined in air at 550 °C for 2 h and were denoted as Ni(2)/CZ, Ni(4)/CZ and Ni(10)/CZ.

Catalysts were characterized by X-ray diffraction, low temperature N2 sorption (SBET), temperature programmed desorption of CO2 (CO2-TPD) and reduction by H2 (H2-TPR). The activity of Ni/CZ catalysts in low temperature dry reforming of methane (550 °C) was studied. Before the experiments the catalyst was reduced in situ at 800 °C for 2 h with 3 % vol. H2 in Ar. The composition of the reaction mixture was CO2/CH4/Ar= 1/1/8 and the GHSV was 20 000 h-1. Catalytic tests were also performed at 650 and 750 °C.

After DRM tests the catalysts were characterized by XRD and thermogravimetric analysis (TG) to examine the formation of carbon deposits.

H2-TPR results indicate higher hydrogen consumption after the introduction of the Ni to the support (CZ=0.75, Ni(2)/CZ=1.14, Ni(4)/CZ=1.64, Ni(10)/CZ=2.6 mmol/gkat). It is caused by strong interaction between nickel and the support, which improves the mobility of lattice oxygen and redox properties.

The results of CO2-TPD suggest that calcined Ni/CZ catalysts and the support exhibit basic properties (CZ=0.28, Ni(2)/CZ=0.28, Ni(4)/CZ=0.29, Ni(10)/CZ=0.38 mmol/gkat). The presence of weak (OH groups), medium (metal-oxygen couples) and strong (O2- ions) basic centres has been observed [3]. During the reduction of Ni/CZ catalysts the weak basic centres disappear (elimination of lattice oxygen) (CZ=0.18, Ni(2)/CZ=0.20, Ni(4)/CZ=0.21, Ni(10)/CZ=0.23 mmol/gkat). It has also been found that introduction of nickel creates new basic centres (the amount of desorbed CO2 increases). These phenomena can be explained by the strong interaction between Ni and ceria, which can enhance the basicity of Ni/CZ catalysts. According to H2-TPR results, the addition of Ni to the ceria-zirconia improves the redox properties of the material, favouring oxygen transfer required for CO2 activation [3].

The highest conversion of methane and carbon dioxide at 550 ºC was observed for the Ni(10)/CZ catalyst (average conversion of %CH4=38.6, %CO2=37.5). High activity of Ni(10)/CZ, in comparison with other samples, may be caused by the high loading of the active phase and a greater number of active sites. A similar tendency for the conversion of CO2 was also observed. It can be explained by the increasing catalyst basicity with the Ni loading. According to our results the best H2 production was observed for the Ni(10)/CZ catalyst. For other Ni/CZ catalysts more carbon dioxide than methane was used in the reaction (which lowers the value of the H2/CO molar ratio). This phenomenon was caused by a competitive reaction of reverse water-gas shift (CO2+H2=CO+H2O) giving H2/CO molar ratio of <1.        After DRM experiments, the catalysts were characterized using XRD and thermogravimetric analysis to identify and estimate the amount of formed carbon material. The results of TG analyses show that the highest amount of carbon deposits was observed for Ni(10)/CZ catalyst 40 % of the mass and 5 % wt. for. Ni(2)/CZ and 10 % wt. for Ni(4)/CZ. The carbon deposition can lead to CO by CO2 in the reverse Boudouard reaction (C+CO2=2CO) or to CO2 by the surface oxygen from the support (C+O2àCO2) [3]. These reactions have an influence on the molar ratio H2/CO. Therefore, the lower value of the molar ratio H2/CO <1 for Ni(2)/CZ and Ni(4)/CZ catalysts, can be caused by RWGS reaction and oxidation of carbon deposits by CO2 [3]. The reverse Boudouard reaction can also occur over the catalyst Ni(10)/CZ.

The activity of a series of Ni/CZ catalysts has been studied in the DRM process. Physico-chemical characterization has revealed that the catalysts obtained exhibit redox and basic properties, which depend on the loading with the active phase. Catalytic DRM tests show that the Ni(10)/CZ catalyst gives the highest conversion of CH4 and CO2 and the highest H2 production as well as the optimum ratio H2/CO= comparison to Ni(2)/CZ and Ni(4)/CZ. The influence of side reactions such as RWGS and reverse Boudouard reaction on the production of hydrogen and the value of the molar ratio H2/CO has been shown. The formation of carbon deposits, which can be oxidized to CO, has been demonstrated. This reaction can change the molar ratio H2/CO obtained in the DRM process over Ni/CZ. It has been found that increasing temperature has a negative influence on the value of the H2/CO ratio.

Preview Presentation:
Presenter(s):
Radoslaw Debek
Once the content has been viewed and you have attested to it, you will be able to download and print a certificate for PDH credits. If you have already viewed this content, please click here to login.