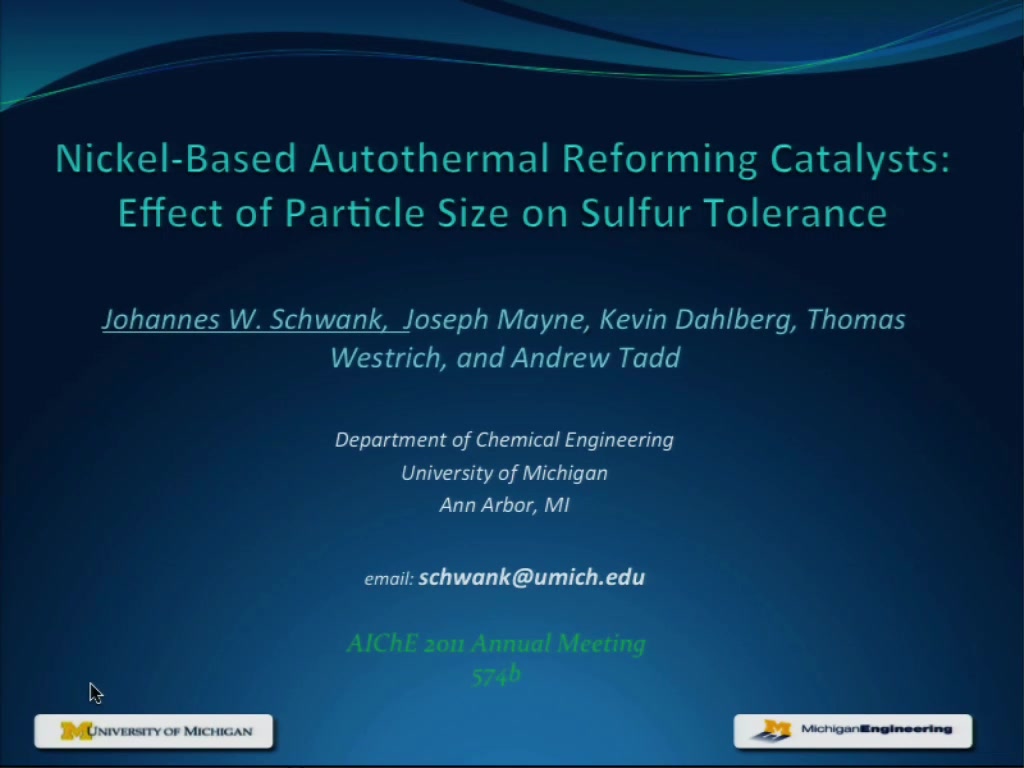 Autothermal reforming (ATR) of liquid hydrocarbon fuels over nickel-based catalysts produces an equilibrium-limited mixture of hydrogen-rich syngas that is suitable as feed for solid oxide fuel cells. Autothermal reforming involves exothermic partial oxidation as well as endothermic steam reforming pathways that lead to non-isothermal temperature profiles in the catalyst bed. The widespread adoption of Ni-based ATR catalysts is hindered by the vulnerability of the catalysts to deactivate when low concentrations of sulfur compounds are present in the fuel.

In a systematic study of isooctane ATR in presence of small concentrations of thiophene, we noticed that catalyst sites responsible for steam reforming were more vulnerable to deactivation than the sites responsible for partial oxidation. The presence of thiophene led to an increase in the catalyst bed temperature profile and a higher yield of intermediate products, such as isobutylene, propylene and ethylene. Long-term stable performance of the catalyst could be achieved under reaction conditions that favored nearly complete conversion of thiophene to hydrogen sulfide.

However, it was not clear to what extent the nickel particle size affected the susceptibility of the catalysts to deactivation. Therefore, we conducted a unique experimental study where we attempted to isolate the effect of nickel particle size from other contributing factors. The total number of active nickel surface sites was removed as a variable in the exploration of particle size effects by selectively pre-treating catalysts to create a series of samples with different Ni loadings and particle sizes but identical nickel surface areas. The activities of these catalysts were measured for autothermal reforming of sulfur-free and thiophene-containing isooctane. Under sulfur-free conditions, the isooctane conversion and yield of synthesis gas increased with increasing Ni particle size. However, in presence of thiophene, catalysts with larger nickel particles were more susceptible to deactivation. Catalysts with small Ni particle sizes exhibited poor steam reforming activity, but were less vulnerable to deactivation by thiophene.

There are two possible explanations for the role of Ni particle size. First, it is conceivable that the Ni surface ensembles in the smallest Ni particles are not large enough for adsorption and carbon-carbon bond breaking of large hydrocarbon molecules. A second possible explanation is that the smaller Ni particles are more prone to oxidation under ATR reaction conditions, with the resulting NiO surfaces having diminished hydrocarbon-reforming activity.

From the standpoint of catalyst design, our results clearly show that larger nickel particle sizes are beneficial for sulfur tolerance, with the caveat that sulfur will mainly deactivate the sites responsible for steam reforming while leaving the partial oxidation sites intact.

Preview Presentation:
Presenter(s):
Johannes W. Schwank
Once the content has been viewed and you have attested to it, you will be able to download and print a certificate for PDH credits. If you have already viewed this content, please click here to login.

Hydrolysis of Ddg
Liquid hot water (LHW) extraction was used as a pretreatment method to separate the hemicellulose fraction from dried distiller’s grain with solubles (DDGS)...
Chemical Reactions: Control the Intended, Avoid the Unintended
Chemical reactions can give us valuable products, new materials and liberated energy. But uncontrolled or unintended reactions can release energy and reaction...