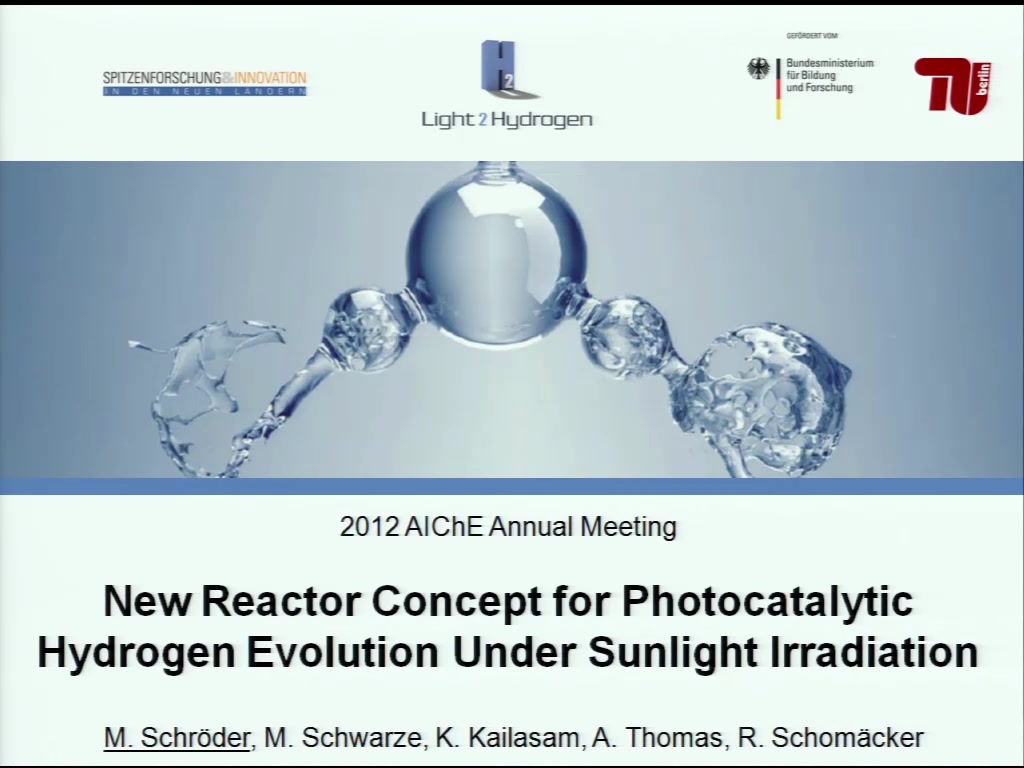 The depletion of fossil fuels and increase of global warming lead to a high demand for alternative energy sources that are clean, cheap and renewable. In addition to wind, water and solar energy, electricity generation via fuel cells is one of the most promising "green energy" sources of the future and therefore hydrogen will become more and more important. But the production of hydrogen by petrochemical routes which are the most applied technologies, are based on fossil fuels and emit CO2. Thus, the production of hydrogen from water via sunlight is considered as a "Dream Reaction" for hydrogen evolution. Currently different groups are working with this discipline of "green energy" to develop new photocatalysts which are able to split water into hydrogen and oxygen or to reduce water to hydrogen with the assistance of sacrificial reagents. Within the interdisciplinary project "Light2Hydrogen", which is funded by the "Bundesminesterium für Bildung und Forschung", homogeneous and heterogeneous photocatalysts are synthesized and analyzed for efficient utilization of solar energy in photocatalytic hydrogen production. To date, homogeneous catalyst in this project have reached a hydrogen production rate of up to 20 mL / h [1] and  the most efficient heterogeneous photocatalyst, which is a mesoporous carbon nitride (mpg-C3N4), reaches a hydrogen production rate of up to 2 mL/h (Xenon lamp) [2].  To generate power from the produced hydrogen, for example in combination with a fuel cell, it is important to design a scalable photoreactor which is combinable with other devices like hydrogen storage and electricity generation. Therefore, a new photoreactor was designed which (a) has a planar window for a defined irradiation with less reflection, (b) uses the pressure increase to follow the reaction and (c) allows a controlled release of the produced hydrogen during the process. The reactor allows quantitative testing of different catalyst materials, kinetic investigations and to calculate the degree of efficiency based on the irradiated energy.

In this new photoreactor, kinetic investigations of mesoporous carbon nitrides as photocatalysts were performed under sunlight simulation. A hydrogen evolution rate of 0,55 mL/h is obtained under optimized reaction conditions. The catalyst is stable and photocatalytic activity is retained after several dark periods as shown in figure 2.

Figure 2: Volume of hydrogen as function of time for several light and dark periods

This contribution will introduce the new photoreactor concept and show some results of the kinetic investigations.

Preview Presentation:
Presenter(s):
Marc Schroeder
Once the content has been viewed and you have attested to it, you will be able to download and print a certificate for PDH credits. If you have already viewed this content, please click here to login.