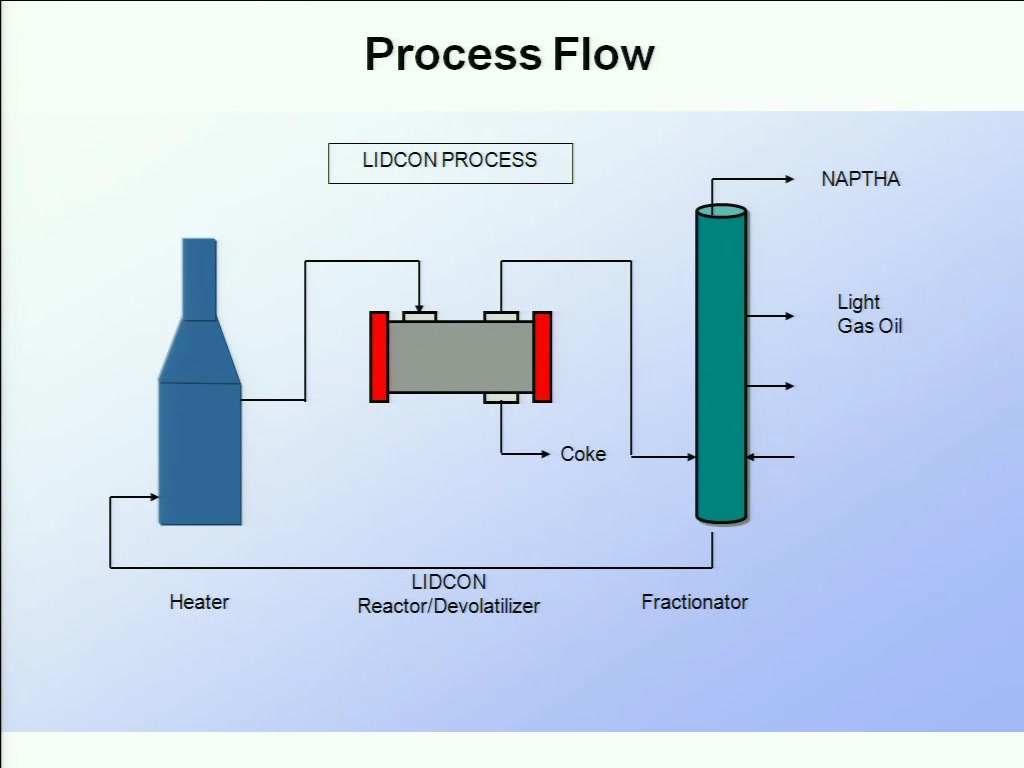 A new coking process can accept resid feed from the conventional resid heater in a coking plant and continuously discharge vapor and dry petroleum coke particles. The process promotes a rapid recovery of volatiles from the resid enabling recovery of more volatiles. It also causes the carbonization reactions to proceed more rapidly, and it produces uniform composition and uniform size of coke particles that have a low volatiles content.

The new process uses a kneading and mixing action to continuously expose new resid surface to the vapor space and causes a more complete removal of volatiles from the produced petroleum coke. Not only are more valuable volatiles recovered, the volatiles are likely to be richer in middle distillates.

The process takes resid from the coker heater directly into a reactor/devolatilizer. As a result of kneading/mixing action by the reactor/devolatilizer, new surfaces of the residuum mass are continuously exposed to the gas phase, enhancing the rapid mass transfer of volatiles into the gas phase. The volatiles are then rapidly cooled to retard degradation. With the rapid reduction of volatiles content in the resid mass, the carbonization reaction rates are accelerated, enabling continuous and rapid production of solid petroleum coke particles. The shortening of the contact time of the volatiles with the hot residuum minimizes degradation of volatiles.

Concurrently with the carbonization reactions and the formation of coke, some cracking of side chains off the larger molecules likely occurs. These smaller, low boiling molecules produced from cracking reactions join the population of the indigenous volatiles. Some volatiles may be generated even after the solid coke is formed. In the delayed coking process many of these late forming volatiles remain trapped in the coke. The process promotes the release of these late forming cracked volatiles, allowing them to escape into the gas phase by breaking the solid coke into small particles.

In addition to the recovery of additional and more valuable volatiles, there are other benefits of the new process compared to delayed coking. The consumption of utilities is less because no steam or water is required. Since there is no quenching, energy from the hot coke is recovered. The process is continuous so is never opened to the atmosphere. There is no cutting procedure as in the delayed coking process where high-pressure water is used to cut the coke out of the drums. Therefore, no volatiles and no coke particles are released into the atmosphere. Workers are not exposed to coke plant atmospheric contaminants, and the potential of coker fires is virtually eliminated.

Preview Presentation:
Presenter(s):
Douglas W. Sullivan
Once the content has been viewed and you have attested to it, you will be able to download and print a certificate for PDH credits. If you have already viewed this content, please click here to login.

Use Modeling to Evaluate Processing Solutions for Heavy Oils
The world’s energy industry has followed the availability of easily attainable and economically feasible supplies for the oil segment that has moved towards...
Chemical Reactivity Management
Could there be potential reactive hazards in your facility you’re not aware of? Don’t let undesired reactions lead to uncontrolled situations and reactive...