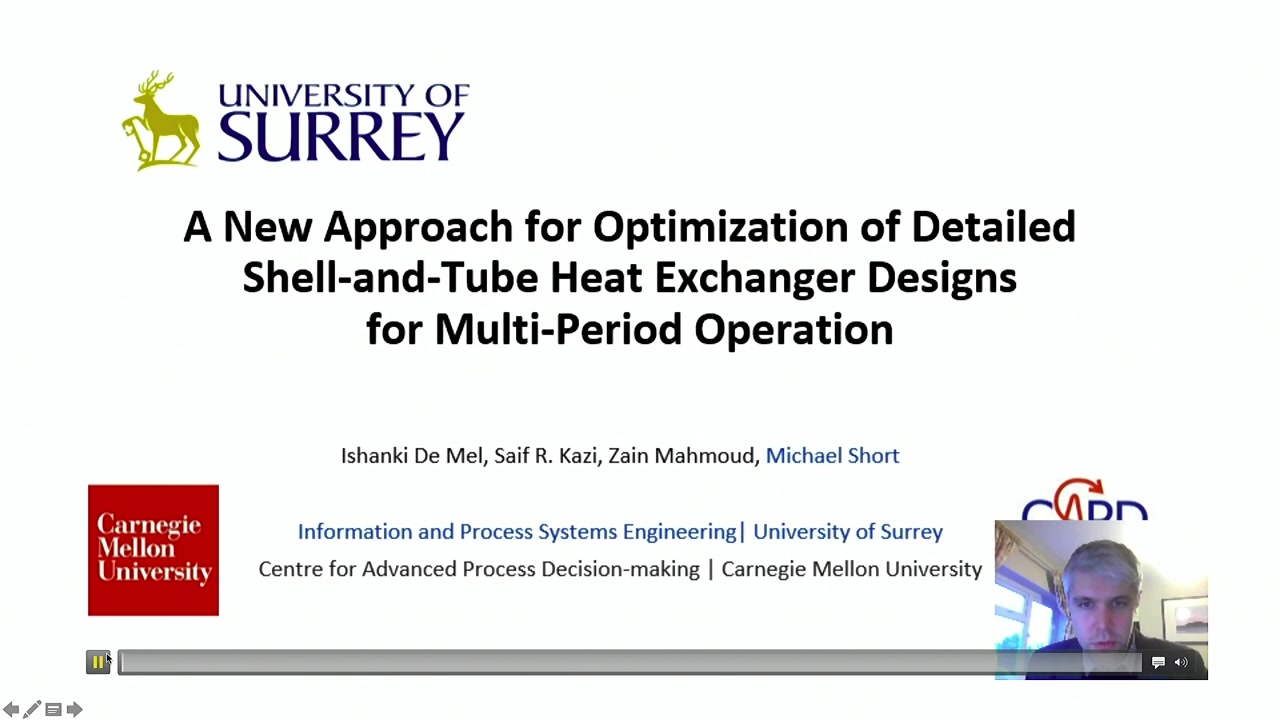 Heat exchangers are critical process units that are often required to operate over many operating conditions. In addition to the dynamic temperature and flowrate fluctuations that occur around a setpoint, many plants also operate with planned changes that may result from new product specifications, seasonal shifts in operating temperatures, batch operation, or with start-up and shutdown procedures. Heat exchanger networks (HENs) that are able to operate over all planned periods are termed multi-period HENs and have been the topic of significant research. Approaches to multi-period HEN synthesis have typically used the largest area across all periods as the optimal exchanger to represent the capital cost of the exchanger in the objective function. However, without taking into account the heat exchanger design details, such as velocities of streams, pressure drops, heat transfer coefficients, and number of shells, it is likely that the selected solution from the multi-period HEN model is sub-optimal, or even infeasible across certain periods of operation.

Short et al. (2016) presented a 2-step multi-period HEN synthesis approach wherein a mixed-integer nonlinear programming (MINLP) stagewise superstructure model is first solved, based off the model of Verheyen and Zhang (2006), to obtain the initial network across multiple periods. Thereafter, detailed shell-and-tube heat exchangers are designed using heuristics to obtain designs that are feasible across all periods of operation. These designs were then used to update MINLP model via correction factors in order to converge to the same solution as the detailed designs. The heuristics-based method used to design the individual exchangers was done manually and therefore the obtained designs are unlikely to be optimal, especially considering the multi-variable nature of the problem.

Optimization approaches to the design of individual heat exchangers have typically involved the formulation of a large non-convex MINLP with integer variables for tube and shell-side stream allocations, number of baffles, baffle cuts, tube diameters, etc. and continuous variables for velocities, heat transfer coefficients, heat exchanger areas, number of tubes, number of tube passes etc. (Mizutani et al. 2003, Ravagnani and Caballero, 2007). These formulations are difficult to converge due to the large numbers of integer variables and nonconvex equations, have only been demonstrated on single shell exchangers, and have yet to be extended to multi-period heat exchanger designs.

This work presents a novel algorithm for finding optimal detailed heat exchanger designs that can operate over multiple operational periods. To the authorsâ€™ knowledge, this is the first such algorithm presented in literature. The model is an adaptation of the newly developed discretized differential algebraic equation (DAE) model for shell-and-tube heat exchanger design from (Kazi et al., 2020). The proposed algorithm first uses a smart enumeration approach, whereby all potential combinations of number of baffles, tube sizes, stream allocations, number of tube passes, and tube lengths, are used within a log mean temperature difference (LMTD) based nonlinear programming (NLP) optimisation model, using Bell-Delaware correlations for the shell-side heat transfer coefficients. In this model, we determine the total annual cost based on pressure drops and annualised area capital costs, with the percentage of fluid bypassed in each period as the degree of freedom. From this enumeration we store the feasible configurations over all periods as well as heat exchanger designs that are only feasible in specific periods. We also show demonstrate a more efficient variant of this enumeration approach whereby infeasibilities are detected through the use of slack variables and the constraint violations are used to determine the need for additional heat exchangers to meet demands for certain periods of operation.

This pool of integer combinations are then used in a detailed DAE model based on Kazi et al. (2020), where the partial differential equations representing the heat balances within the exchanger are discretized using the baffles and tube passes from each feasible integer combination. Here, the algorithm assesses the optimal bypass flowrates, tube lengths, heat transfer coefficients and heat exchange areas to provide an optimal exchanger to deliver the required heat load in each period. The proposed model does not require the use of any binary variables, thereby allowing it solve faster and more reliably than other approaches. Since the model does not require LMTD based assumptions, the model is also more accurate for multiple shell heat exchangers, which are very common in HENs problems. In addition, the NLP-based model can be used in problems where physical properties vary with temperature inside the heat exchanger.

The purpose of the algorithm is for these designs to be implemented directly into a multi-period HEN optimization problems, and therefore the design algorithm is robust to different numbers of periods, large changes in temperatures and flowrates between periods, etc. We demonstrate the approach on several examples, including incorporating the models within a multi-period heat exchanger network synthesis problem and compare to the work of other authors to show its utility and computational efficiency.

Preview Presentation:
Presenter(s):
Saif Kazi
Zain Mahmoud
Ishanki De Mel
Michael Short
Once the content has been viewed and you have attested to it, you will be able to download and print a certificate for PDH credits. If you have already viewed this content, please click here to login.

New Silicon-Carbide Joining Technology
FM Technologies, Inc. (FMT) has developed new methods for joining SiC-to-SiC and SiC-to-metal for use in ethylene production. Global production of ethylene...
Computational Tools for Physical Property Estimation and Solvent Selection
We will present the details of a computational, physical property-based solvent selection methodology that we have used in numerous process development...