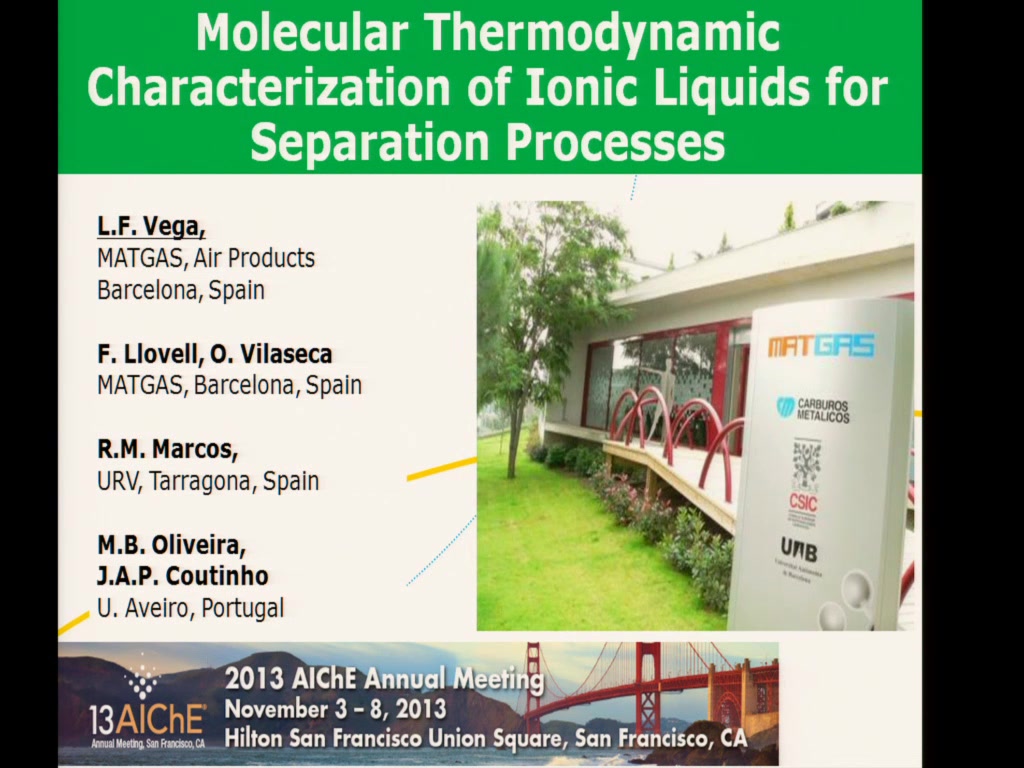 Ionic Liquids (ILs) have been widely studied in the last ten years because of their potential applications from a technological point of view as well as their highly non-ideal properties from a fundamental perspective. The fact that they are liquid and have nearly zero vapor pressure values at room temperature , as well as their capacity to modify their adsorption capabilities by modifying the anion-cation pair , convert them in good candidates for gas absorption separation and several other industrial processes. However , the process of thermodynamic characterization , needed before put into a final application , is very expensive and time-consuming in terms of experimental work. Hence , different equations of state have been applied to the estimation of the thermodynamic properties of these ionic liquids , with different degrees of success. The complexity of these molecules has reduced the ability to reproduce some thermophysical properties in good agreement with the measured data , and most of the work done up to now with success has focused only in the description of the temperature-density diagram and the solubility of a particular gas on the ionic liquid. One of the challenges in these theoretical approaches is to make them as general as possible , reproducing several features of ionic liquids and , in particular , their interfacial and derivative properties , as well as mixture data , with the same degree of accuracy as temperature-density data , instead of focusing on a particular property. We will present and discuss the work our team has been doing in this field in the last years. This work is intended to fill this gap by proposing and validating a general and simple molecular model with the soft-SAFT equation of state [1] giving physical insight into the development of the model and the accuracy of the parameters for predictive purposes. This is accomplished by including different calculations of thermophysical properties of ionic liquid families with two different cations (imidazolium and pyridinium) and several anions (BF4 , PF6 , Tf2N , MeSO4 , etc.). In all cases , simple but reliable molecular models are presented based on structural information and , also , in results obtained from molecular simulations and ab-initio calculations. As a first step the molecular parameters are fitted to single-phase equilibrium data and used in a transferable manner to predict other properties , such as high pressure density data , enthalpy of vaporization , critical points , interfacial tensions [2] and second order thermodynamic derivative properties. Correlations with the molecular weight are identified. Some derivative properties (heat capacity , isothermal compressibility , etc.) are used to discriminate among sets of parameters. The second step involves the assessment of the predictive ability to reproduce the solubility of several pollutant gases (CO2 , SO2 , NH3 , H2S) in those ILs , as compared to experimental data [3-5]. In most of the cases , excellent agreement is found using a single temperature-independent binary parameter. The transferability of the binary parameters is also assessed. An estimation of the energetic properties is given in order to determine the effect of enthalpic and entropic effects on the solution. Finally , aqueous mixtures of ionic liquids and their mutual solubilities (liquid-liquid equilibrium) are reproduced with this approach [5-6]. AcknowledgementsF. Llovell acknowledges a TALENT fellowship from the Generalitat de Catalunya. M.B. Oliveira acknowledges her Post-Doctoral grant (SFRH/BPD/71200/2010). This work has been partially financed by the Spanish government (projects CTQ2008-05370/PPQ and CENIT SOST-CO2 , CEN2008-01027) , the Catalan government (project 2009SGR-666) , the Portuguese Government (project PTDC/EQU-FTT/102166/2008) and from Carburos Metálicos , Air Products Group. CICECO is being founded by FCT through project Pest-C/CTM/LA0011/2011.References[1] F.J. Blas , L.F Vega , Mol. Phys. 92 (1997) 135. [2] J.D. van der Waals ,  Z. Phys. Chem. 13 (1894) 657. [3] J.S. Andreu , L.F. Vega ,  J. Phys. Chem. B 112 (2008) 15398. [4] F. Llovell , R. M. Marcos , N. Mac Dowell , L. F. Vega , J. Phys. Chem. B.  116 (2012) , 7709. [5] M. B. Oliveira , F. Llovell , J.A.P. Coutinho , L. F. Vega , J. Phys. Chem. B. 116 (2012) 9089. [6] F. Llovell , E. Valente , O. Vilaseca , L.F. Vega ,  J. Phys. Chem. B 115 (2011) 4387.

Preview Presentation:
Presenter(s):
Lourdes F. Vega
Once the content has been viewed and you have attested to it, you will be able to download and print a certificate for PDH credits. If you have already viewed this content, please click here to login.