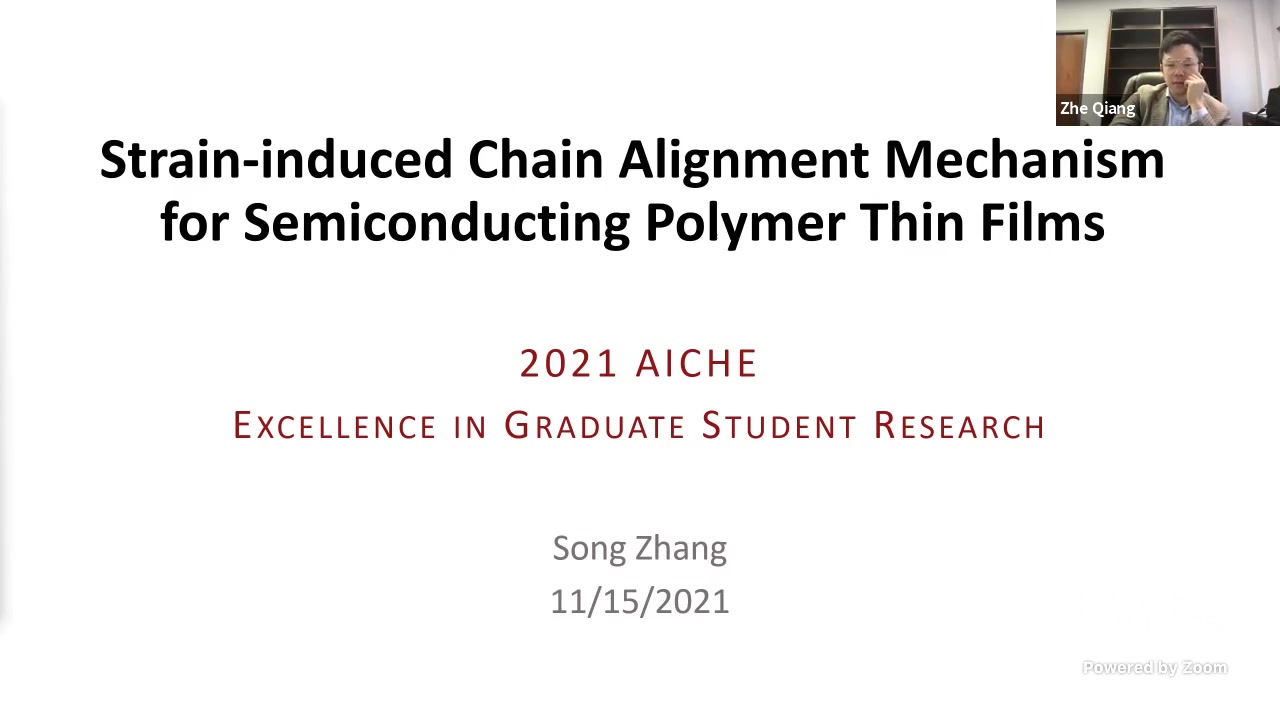 Flexible and wearable electronics that are conformable to soft surfaces like human skin have raised tremendous research attention. Semiconducting polymers are unique species due to their high electrical performance, solution processability, and intrinsic mechanical stretchability. Previously, many efforts have been made to improve their charge transport by enhancing the polymer chain alignment. Both mechanical stretching and shear coating methods have shown promise in increasing the charge carrier mobility along the alignment direction for semiconducting polymers, especially on traditional conjugated polymers like poly(3-hexylthiophene) (P3HT). Strain-induced chain alignment, however, is still less explored for the emerging high-performance donor-acceptor (D-A) type conjugated polymers with much more rigid polymer backbones. The fundamental understanding of the tensile alignment-morphology-performance relationship is vital for future wearable electronics applications.

Herein, we performed a detailed study on the chain deformation mechanism for a series of side-chain engineered diketopyrrolopyrrole (DPP)-based semi-flexible D-A polymers. We started with thin-film tensile tests and CG-MD simulations to explore the fundamental mechanism of the macroscopic deformation process. Next, wide/small-angle hard X-ray scattering, wide-angle tender X-ray scattering, polarized UV-vis spectroscopy, NEXAFS, and atomic force microscopy (AFM) were applied to investigate the microstructural chain alignment upon thin-film deformation, which was further confirmed by the CG-MD simulations. Later, organic field-effect transistors (OFETs) were fabricated to test the effect of strain-induced chain alignment on device performance.

The detailed morphological analysis demonstrates (1) highly aligned polymer crystallites upon deformation, while the degree of backbone alignment is limited within the crystalline domain. (2) Besides, the aromatic ring on polymer backbones rotates parallel to the strain direction despite the relatively low overall chain anisotropy. (3) The effect of side-chain length on the DPP chain alignment is observed to be less noticeable when compared with its drastic influence on stress-strain responses. These observations are distinct from traditional linear-chain semicrystalline polymers like polyethylene due to distinct characteristics of backbone/side-chain combination and the crystallographic characteristics in DPP polymers. Furthermore, a stable and isotropic charge carrier mobility is obtained from fabricated organic field-effect transistors. This study deconvolutes the alignment of different components within the thin-film microstructure and highlights that crystallite rotation and chain slippage are the primary deformation mechanisms for semiconducting polymers.

Preview Presentation:
Presenter(s):
Amirhadi Alesadi
Xiaodan Gu
Wenjie Xia
Song Zhang
Once the content has been viewed and you have attested to it, you will be able to download and print a certificate for PDH credits. If you have already viewed this content, please click here to login.

Prediction of Thermodynamic Properties of Ionic Liquids: Improved Performance From Ab Initio Molecular Dynamics
Classical molecular dynamics and Monte Carlo simulations have been used extensively over the past ten years to predict the thermodynamic and transport...
Water Mobility: A Bridge Between the Hofmeister Series and the Friction of Zwitterionic Surfaces In Aqueous Solutions
In this work, we systematically studied the effects of ions in the Hofmeister series on the friction of zwitterionic surfaces with carboxybetaine self-...