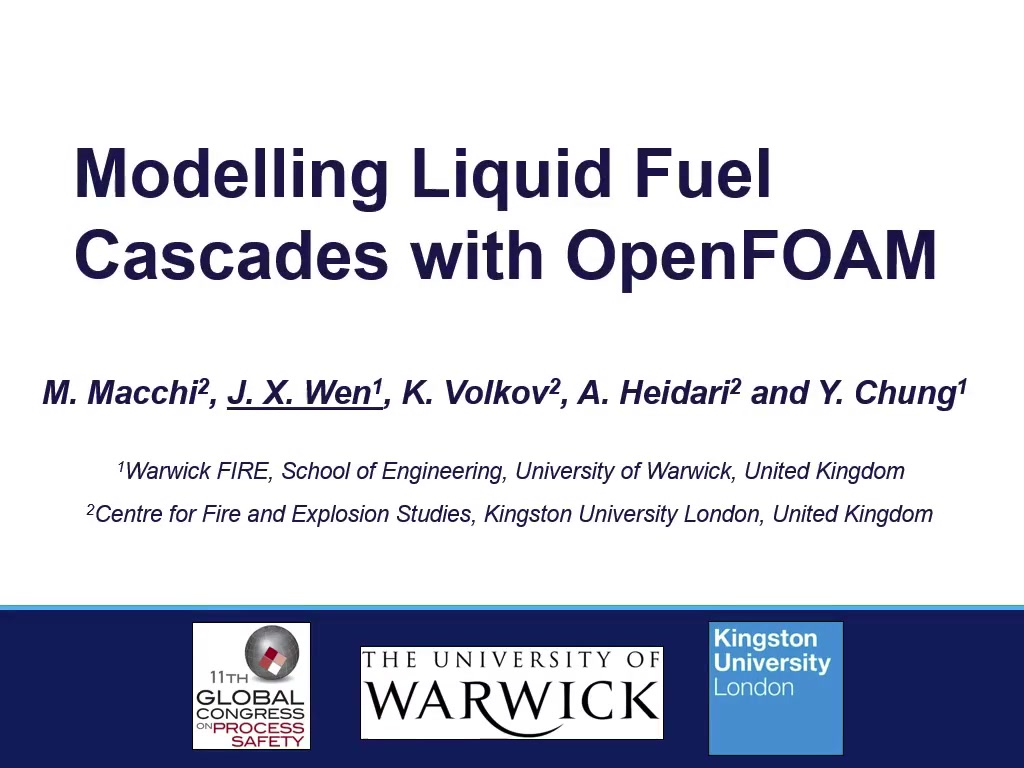 Evaporating liquid cascades resulting from gasoline and liquefied natural gas (LNG) tanks overfilling or rupture of elevated pipes create a source of flammable vapour cloud. Such phenomena was responsible for the formation of the large fuel vapour cloud, the ignition of which resulted in the large scale explosion in Buncefields1 on 11 December 2005 at the Hertfordshire Oil Storage Terminal, an oil storage facility located by Hemel Hempstead in Hertfordshire, England. Despite its significance, there lacks adequate models treating the underlying physics of this phenomenon. The present study numerically analyses fuel cascades which are considered as arrays of droplets. Consideration is given to vapour production inside the cascade due to droplets evaporation and breakup. The basic solver uses is sprayFoam within the frame of open source computational fluid dynamics (CFD) code OpenFOAM®2.

The fuel droplets evaporate during their motion and create a cloud of flammable vapour. In order to capture the characteristics of the hazardous phenomena, the CFD model needs to capture the underlying physics with adequate sub-models. In the present study, the multi-phase flow is simulated with a combined Eulerian-Lagrangian approach. The governing equations of gas phase represent the conservation equations of mass, momentum and energy including the source terms arising from the interaction with the droplets. The Large-Eddy Simulation (LES) approach is used as it is expected to give better results regarding the interaction of the droplets with the flow. The particulate phase is simulated through a Lagrangian deterministic or stochastic tracking models to provide particle trajectories and particle concentration. Particular emphasis is given to the effect of impingement to account for the effect of deflector plate and wind girder. The study involves developing robust and accurate models for the instabilities and aerodynamic breakup in the cascade which contributes to the formation of the cloud, air entrainment and fuel impingement on deflector plates. These sub-models are coupled with the OpenFOAM® toolbox.

The predictions are compared with the experimental measurements and CFD predictions3 previously conducted by the Health and Safety Laboratory, an agency of the Health and Safety Executive. The resent predictions are found to better capture the interaction between the droplets and the gas phase; and achieved improved agreement with the experimental measurements in gasoline fuel cascades. On the basis of this validation, the model is used to predict a hypothetical LNG cascade which mimics the accidental scenario of overhead LNG pipe rupture. The results will be discussed in the context of safety and compared with that of gasoline fuel cascade in terms of the resulting vapour cloud hazards.

Preview Presentation:
Presenter(s):
Jennifer X. Wen
Once the content has been viewed and you have attested to it, you will be able to download and print a certificate for PDH credits. If you have already viewed this content, please click here to login.