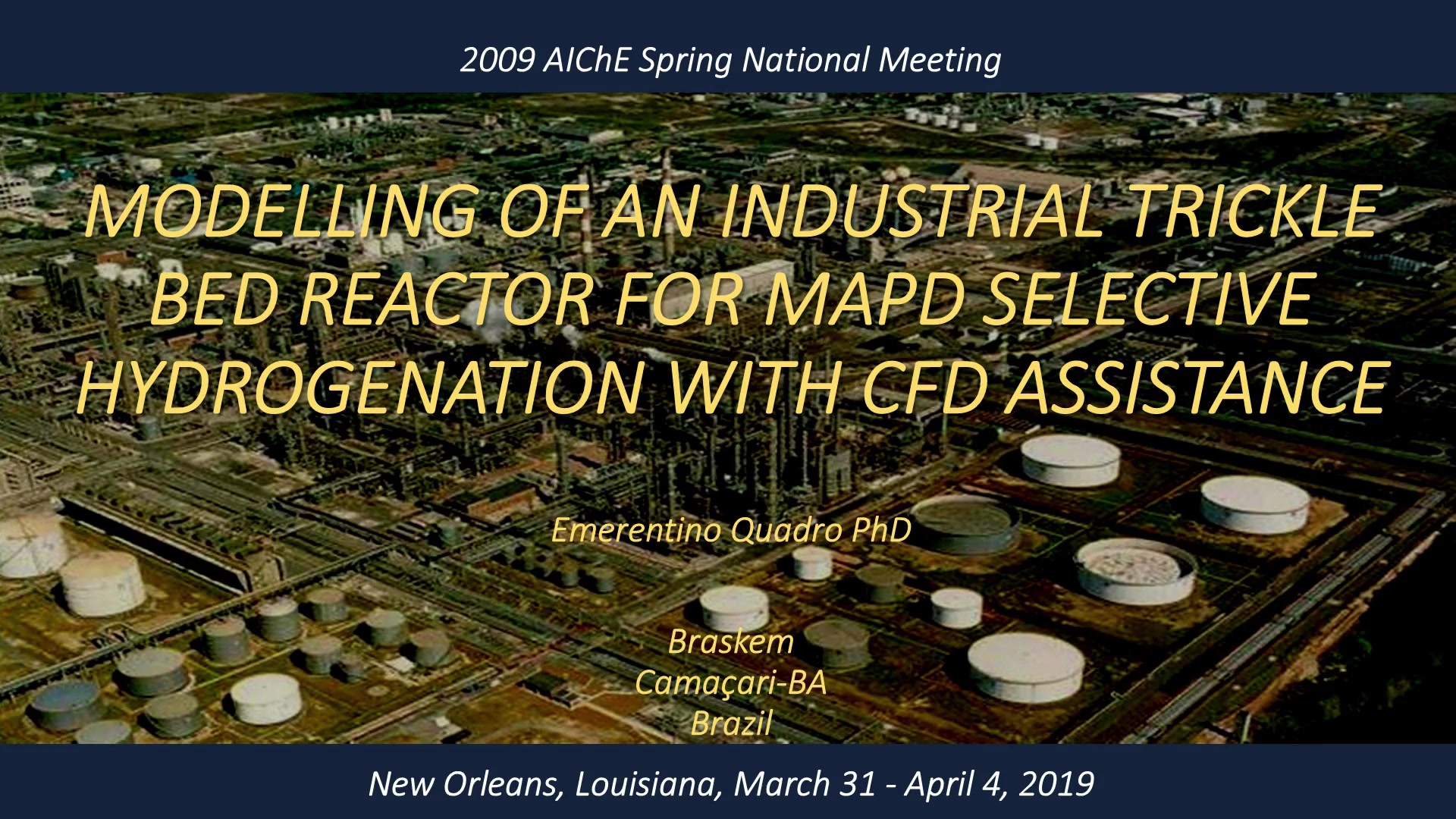 Nowadays, propylene is the second most important petrochemical monomer, close to 70 million of tons are produced annually. The conventional naphtha steam cracking process produces a C3-cut (stream of hydrocarbons with three atoms of carbon) containing about 85â€“90 % mol of propylene, close to 5% mol of propane and up to 6% mol of Methylacetylene (MA) and Propadiene (PD). The MAPD is a poison to the catalyst for propylene polymerization and the currently established technology strategy to reach the required MAPD concentration in the propylene polymer grade specification is the selective hydrogenation. The performance of this system is critical to the energy efficiency of the industrial plants and consequently their competitiveness.6

At the end of 80Â´s, IFP (French Institute of Petroleum) developed the technology to hydrogenate MAPD in trickle bed reactors (TBRs). The main characteristic of the TBRs is the presence of liquid and vapor flowing through a porous medium (fixed catalytic bed), where the vapor is a continuous phase. This process offers some advantages, compared to the traditional vapor phase technology, mainly related to reaction selectivity, catalyst lifetime (due to the removal of produced oligomers from the catalyst surface by the liquid flow) and equipment costs, once the required reactor volume is smaller than to vapor phase.

It is almost unbelievable, however it is not possible to find in the open literature a general and realistic phenomenological intrinsic kinetic model to predict the behavior of a large-scale industrial MAPD hydrogenation reactor in liquid phase. The main difficulty to identify the intrinsic kinetic models for these reactions in liquid phase is the relevance of the mass, momentum and energy transport effects. The few studies found in the open literature are quite simplified (plug flow assumption, catalyst volume ignored, without radial dispersion, no mass transfer between phases etc) or they are based on non-phenomenological models, with limited applicability; besides, most of these few studies are based on lab scale reactors, not recommended, once TBRs scale up usually results in relevant deviations due the importance of transport effects in this kind of reactor. The aim of this investigation was to fill this lacuna.

The kinetic models proposed by this investigation are based on the LHHW (Langmuir-Hinshelwood-Hougen-Watson) mechanism and their parameters regression was carried out in an iterative algorithm (Marquadt-Levenberg method) by using CFD (Computational Fluid Dynamics simulations) coupled to mass transfer between phases and kinetic models, whose parameters were adjusted to fit the experimental data (on-site running industrial TBR operational data). The proposed kinetic models coupled with an empirical catalyst deactivation model were fed to the CFD simulation by using an UDF (User Defined Function), a compiled C code utilized by the CFD solver to compute the effect of the reactions on the mass balance per component and the heat generation in each cell of the grid.

The development of theory and software for CFD renders it possible to acquire insight into the flow distribution in the equipment flow status so that these problems can easily be solved by numerical simulation method and eventually the experimental data can supply information to adjust de CFD simulations. CFD has been successfully applied in many different areas such aeronautic, meteorology, ocean dynamics, fire simulation, biomedical flows etc. For this reason, CFD is currently an important interdisciplinary tool.

In this investigation, the CFD calculations were performed in the Finite Volume approach by a commercial software in steady state mode, 3D, multi-phase (Volume Of Fluid â€“ VOF model - was applied) and double precision. The VOF model is a surface-tracking approach considering a fixed Eulerian grid, where a set of momentum equations is shared by both fluids, besides the volume fraction of each of the fluids is tracked for each cell of the domain. A pressure-based Navier-Stokes solution algorithm was employed. The turbulence model applied was the k-Îµ, largely used for porous media, with realizable parameters. A grid sensitivity analysis was performed and confirmed that a higher resolution discretization (non-structured 3D grid) would not affect the results. The main grid quality criteria utilized were skewness, aspect ratio of tetrahedral cells, minimum angle and orthogonal quality:

The catalytic bed was represented as a porous medium. The porous medium model adds a momentum sink in the governing momentum equations, and it reduces the available area to the fluid flowing. Based on DarcyÂ´s relation, the main parameters employed in porous medium characterization for the CFD steady state simulation are the permeability and the void fraction, these parameters was determined by lab experiments. In fact, the DarcyÂ´s equation is strictly valid for Reynolds number lower than 10, therefore it was modeled empirically the permeability as a function of the velocity.

Thirty-eight cases of steady state operation condition (from an on-site running reactor) were selected, whose operational data could be used in the kinetic model regression procedure. Definition of steady state is when operating conditions are not changing, for example, variations of feed flow, inlet or outlet MAPD concentration, hydrogen feed flow etc. The methodology consisted of collecting, at least, four consecutive values of the variables measured every 30 minutes. The standard deviation (Ïƒ) should be equal or lower than 2% of their average value.

The prediction of the hydrogen concentration in reactive liquid mixture at various temperatures is an important factor to the representativeness of the CFD simulation for hydrogenation of MAPD in the TRB. Due to the difficulty of thermodynamic models to represent the concentration of hydrogen in liquid phase of light hydrocarbons, experimental tests were carried out to determine an empirical model describing the hydrogen absorption, at equilibrium, by a mixture of hydrocarbons with three carbon atoms (propane, propylene, MA and PD).

A separate set of experimental data were used to validate the models. This was a realistic model, once many aspects related to trickle regime, porous media, double phase flowing and mass transfer between phases were taken in account. This way, it was possible to separate the effects of mass transfer between phases, flow dispersion and heat distribution, in order to compute the intrinsic kinetic influence isolatedly.

The results indicated that the vapor phase volume fraction inside the reactor decreases axially in a significant way (from 0.53 to 0.41). These data show the importance of CFD to represent correctly the reactor behavior and to isolate the effect of the kinetics. However, the radial variations of concentration, temperature and velocity are not significative.

The obtained model for the prediction of hydrogen concentration in reactive liquid mixture was in according to the operational experience, once the industrial catalyst bed temperature does not exceed 49°C. It occurs because, in the operational pressure utilized (2015 kPa), the hydrogen concentration in liquid phase is zero when the equilibrium temperature is higher than 322 K, therefore, at this temperature and pressure, there is no exothermic reactions anymore.

Based on the obtained model, it was built a reactor response surface. As conclusion, it was observed that the MAPD conversion increases proportionally to the recirculation flow rates, however, the same action reduces the reactor selectivity. The effect of hydrogen feed rate on the MAPD outlet concentration and bed selectivity was not significant.

It is known that various catalyst manufacturers and technology licensors have carried out private studies to modelling these reactions, however, we are confident that the kinetic models obtained by this work are the most representative equation ever published in the open literature to describe the MAPD hydrogenation in liquid phase. The findings allow us to understand the phenomena inside the TBRs applied to MAPD hydrogenation and to design new TBRs to this function.

The main highlights of this work are listed below:

Preview Presentation:
Presenter(s):
Emerentino B. Quadro
Once the content has been viewed and you have attested to it, you will be able to download and print a certificate for PDH credits. If you have already viewed this content, please click here to login.

Optimal Design of Transient Microreactor Experiments
Development of synthetic routes for active pharmaceutical ingredient (API) synthesis is increasingly performed using microreactors, because their use can...
Process Design and Scale-up Study for the Production of Polyol-Based Biopolymers from Sawdust
Polymers are materials with exceptional properties that contributed to the development of modern societies (Thompson et al., 2009; Yarsley and Couzens, 1945)...