Modeling and Optimization of Algae Based Biodiesel Production 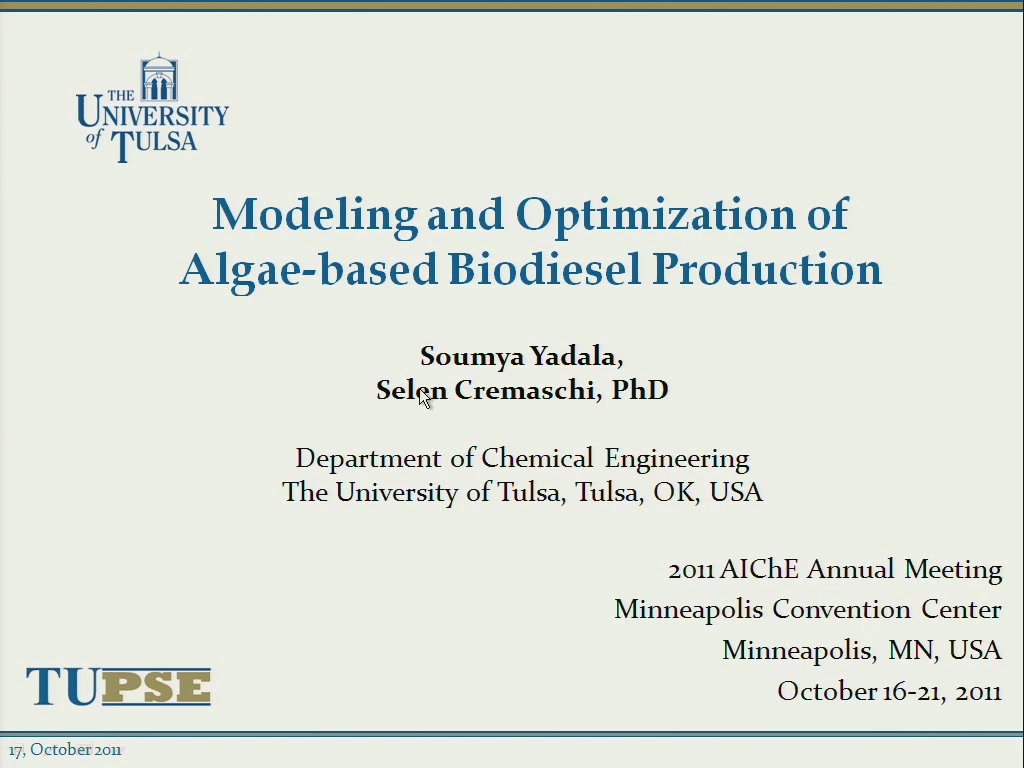 Processing of biodiesel from algae biomass has attracted much interest in recent times due to many reasons. Significant amongst them are global warming and scarcity in fossil fuels. It has been suggested that this third generation biofuel, a carbon neutral alternative, is capable of meeting the existing demand for transport fuels [1]. However, substantial challenges are encountered in deriving fuels from algae biomass. Primary amongst them is the relatively higher cost of cultivating and harvesting algae species. Due to this reason, currently, algae based biofuels cost much higher than the biofuels from first generation and second generation biofuel feedstock [2].

This work focuses on modeling and optimization of algae based biodiesel production. Design parameters, for cultivation of algal species, at a geographical location are affected by that location's climatic conditions such as annual solar irradiance. Hence, geographical location, at which algae is cultivated, plays a vital role in the biodiesel production. Another significant factor to be considered for producing maximum amount of biodiesel is the selection of algal species. There are a variety of algal species present throughout the world, however, not all algal species are suitable for biodiesel production because of varying amounts of oil content and specific growth rates. Hence, selection of algal species is also an important factor in determining the cost of biodiesel production. There are a number of technologies for each process involved in the production of biodiesel from algae biomass but the question of which technology, for which species, and at which location, to attain maximum profits is still an open challenge to the researchers. Presentation presents the tasks that should be completed to produce algae-based biodiesel and options/technologies (which can be used to achieve these tasks) considered in this work. Using the presentation, a disjunctive programming model is developed to determine the algal species, the location for the cultivation of algae, and the optimum route from growth of algae to production of biodiesel by selecting one technology for each process with the objective of minimum cost of biodiesel production. The resulting Mixed Integer Nonlinear Programming (MINLP) model is solved using GAMS 23.6.5/SBB solver. With the model parameters used, 8000 tons/year of biodiesel can be produced at a cost of about $153 per gallon for a period of ten years using the selected technologies. Accordingly, Tricornutum species was selected to grow at all the given locations by means of artificial growing technique-tubular photobioreactor. The cultivated algae were harvested through flocculation which was then concentrated using centrifugation. The algae biomass was dried by low pressure shelf drying followed by extraction of algal oil by expeller press and finally, the algal oil was sent to transesterification for biodiesel production.

Preview Presentation:
Presenter(s):
Soumya Yadala
Once the content has been viewed and you have attested to it, you will be able to download and print a certificate for PDH credits. If you have already viewed this content, please click here to login.

More Heat than Light: Opportunities for Extremely Thermophilic Microorganisms and Enzymes in Biofuels
The recent interest in biofuels has motivated a closer look at microorganisms from extremely high temperature environments, not only for their capacity to...
Modified AnoporeTM Hybrid Membranes for the Microfiltration of Cellulose Acid Hydrolysis Mixtures
Three classes of nonfouling substances, poly[poly(ethylene glycol) methyl ether methacrylate] (POEM), poly(sulfobetaine methacrylate) (PSBMA), and...