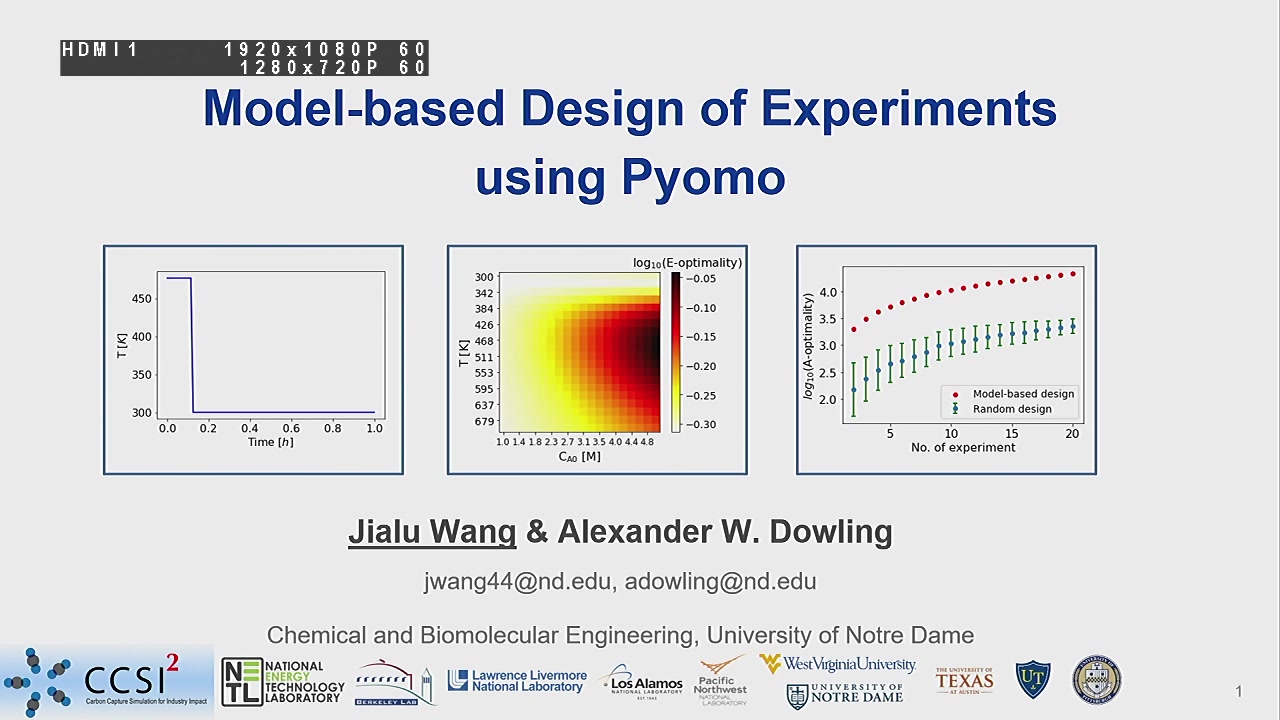 Design of Experiments (DoE) methods optimize computational and physical experiments to maximize the information gain and minimize time and resource costs. Unlike the classical â€˜black-boxâ€™ (a.k.a. factorial, response surface) DoE approach which decides the best design by the input-output relationship, model-based DoE (MBDoE) leverages high-fidelity models constructed from the underlying physical principles of the experimental system[1]. Taking advantage of the prior knowledge of the experimental system, MBDoE can discriminate between scientific hypotheses, posed as mathematical models, and facilitates optimization with efficient gradient-based methods. MBDoE has a rich history of success in chemical engineering including chemical kinetics[2], heat/mass transfer modeling[3], and biological modeling[4]. `Black-boxâ€™ DoE is readily available in several software platforms including Design Expert, JMP, Modde, and several Python packages, such as pyDOE, pyDOE2, dexpy, and doepy. Yet, there are no popular general-purpose software platforms for MBDoE. Often instead a researcher implements their custom code in MATLAB, Python, GAMS, etc., which limits adoption in new application areas.


In this work, we present a general Python package for MBDoE using Pyomo models. Aiming at reducing the uncertainty in the system, MBDoE is conducted by minimizing the variance of the Fisher Information Matrix(FIM), which can be interpreted as minimizing the volume of the covariance ellipsoid. Classical alphabetic criteria such as D-optimality (determinant), A-optimality (trace), E-optimality (minimal eigenvalue), and a modified E-optimality (condition number) are considered to measure the size of the FIM [5]. Nonlinear programming sensitivity analysis, available through sIPOPT [6] or k_aug [7], is used to reduce the computational cost of assembling the FIM by over an order of magnitude.

The goal of MBDoE is to infer the heat transfer coefficient (non-adiabatic operation) and a lumped kinetics transport parameter. Through MBDoE, we address the following questions: (1) Is the model identifiable with the current experimental configuration? (2) What is the value of modifying the experimental system (e.g., adding temperature sensors)? (3) How to conduct fixed bed experiments so that we can improve the accuracy of parameter estimation by DoE? The limited literature that considers DoE for a fixed bed adsorption system focuses on â€œblack-box methodsâ€ such as factorial methods and response surfaces methods which do not offer insights into the fundamental physical process, in contrast to our proposed MBDoE approach.

In the future, validation mathematical models will be used for optimization and techno-economic analysis of novel CO2 capture processes as part of the Carbon Capture Simulation for Industrial Impact (CCSI2) project.

Preview Presentation:
Presenter(s):
Alexander Dowling
Jialu Wang
Once the content has been viewed and you have attested to it, you will be able to download and print a certificate for PDH credits. If you have already viewed this content, please click here to login.

Effects of C12H26 and O2 on NO Uptake on Pd/SSZ-13: Experiments and Modeling
Addressing NO x (NO+NO 2 ) emissions during vehicle cold start (< 150 o C) remains a major challenge. Passive NO x Adsorber (PNA) is a potential solution to...
Modeling CO2 Removal via Hollow Fiber Modules
Are you involved in CO 2 removal? Are you focused—like many engineers—on the use of solvents? There’s another method of CO 2 removal using highly selective...