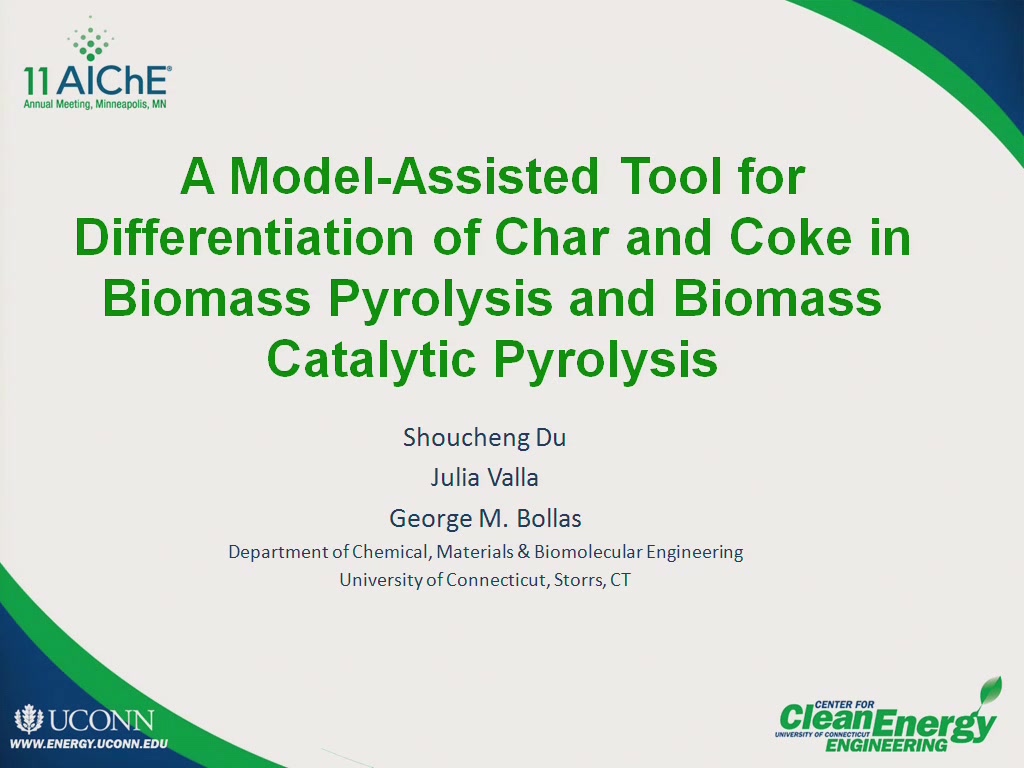 Coke formation appears as a reason for catalyst deactivation and results in undesirable product selectivity in biomass pyrolysis. However, there is no effective way to separate coke and char in the majority of current approaches, which prevents studying coke formation and therefore the real reason for catalyst deactivation. The purpose of this study is to develop a model-assisted tool for quantitative analysis of coke and char composition in the residual after biomass pyrolysis and biomass catalytic pyrolysis.

In this study, alpha-d-glucose was used as a biomass representative molecule and ZSM-5 from W.R. Grace & Co. was used for catalytic pyrolysis experiments. Char samples were prepared with biomass (catalytic) pyrolysis by devolatilizing glucose at different temperatures in nitrogen atmosphere. The gasification of biomass chars was carried out in a thermogravimetric analyzer (TGA) in carbon dioxide atmosphere at different heating rates.

The following equation is the random pore model for fluid-solid reactions developed by Bhatia and Perlmutter [1].

In the above equation, the pre-exponential factor k0, activation energy E, the structural parameter ѱ can be obtained, by fitting the model to experimental data of char/coke gasification or oxidation. Similar approaches have been used by Miura et al. [2] and Fermoso et al. [3] in the characterization of coal/coal-biomass blend derived chars. On the basis of these works, a method is being developed to differentiate coke from char, using temperature programmed gasification (reaction of char and coke with CO2) to exploit the fact that the more reactive char is gasified at lower temperatures than the less reactive coke. Independent application of RPM for coke and char followed by integration for a linear ramp in temperature yields a correlation for the total mass loss X as a function of the composition in coke and char. The concept applies similarly on the other two models, VM and GM. Moreover, a pore-scale effectiveness factor is introduced to modify RPM, allowing different pore sizes to grow at different rates [4].

The final correlations for each model are then fitted to experimental measurements of TGA gasification at different heating rates, resulting in a model-assisted tool for char and coke identification. Parameter estimation is performed using GAMS global solvers. The results of the models are also compared and verified with scanning electron microscopy to validate the approach and generate a standard method for char and coke characterization. Experimental results, statistical analysis of the literature and model fitting parameters will be presented. Results illustrate the applicability of the method for the characterization of biomass char and coke.

Preview Presentation:
Presenter(s):
Shoucheng Du
Once the content has been viewed and you have attested to it, you will be able to download and print a certificate for PDH credits. If you have already viewed this content, please click here to login.

Biomass Energy Systems for Steam, Power, and Fuel Production
Biomass is a renewable fuel that can be used to produce energy and reduce operating costs. For the CEP, it can also be used to produce chemicals. An added...
Enhanced Yield of Bio-Gas Production With Modified Themo-Reactor Configuration and Separation of CO2
Pakistan is currently facing severe energy crisis with significant shortfall. A number of short-term technical solutions are available but are not adequate to...