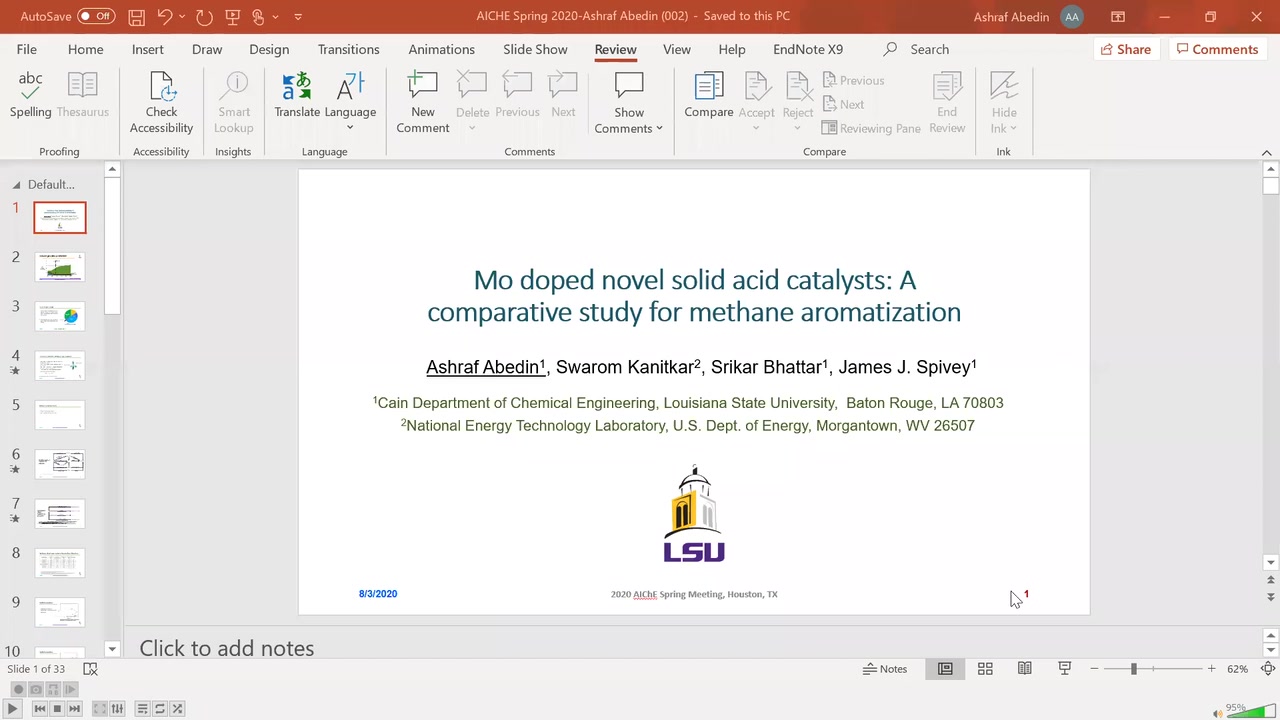 The production of natural gas in
the United States is now at its peak, due to novel technologies such as
horizontal drilling and hydraulic fracking. The primary end uses of natural gas
include power generation and flaring. Methane is the most abundant constituent
of natural gas, and has the potential to produce high value chemicals.  This
includes valuable products such as benzene, which is currently obtained by
crude oil processing through catalytic reforming. Typical methane conversion
processes consist of indirect reactions that include co-reactants, which makes
these processes less energy efficient. Direct conversion of methane does not
involve an intermediate step.

One such direct pathways to
activate methane is methane aromatization (MDHA), which converts methane
directly to benzene and hydrogen.

Very high temperatures (7000C-10000C)
are needed to drive the equilibrium towards the formation of benzene and
hydrogen. But at these high temperatures, thermodynamics are selective towards
formation of coke. This makes MDHA as one of the most challenging problems in C1
catalytic chemistry.  Mo oxide supported on ZSM-5/MCM-22 has been well-studied
in recent years for MDHA. It is generally thought that Mo carbides are
responsible for activating methane by forming CHx species, which are
dimerized into C2Hy species and then oligomerized on the
acidic zeolite sites on ZSM-5/MCM-22, leading to aromatics.

Although homogeneous acid
catalyzed-reactions are typically active and selective, the separation of the
products from the catalysts is expensive.  Solid acids avoid the separation
step, and can be used at an elevated temperature.  In this work, we have tested
different solid acids as supports for Mo oxide to compare the activity for
methane conversion with in-house prepared ZSM-5 (Si:Al=50:1).  Here, sulfated
zirconia (SZ) and sulfated hafnia (SH) are prepared as novel acid supports for
Mo oxide. After loading Mo, these catalysts were characterized using Raman,
pyridine DRIFTS and ammonia TPD before MDHA reactions were run.

Three catalysts were tested:
Mo/SZ, Mo/SH, and Mo/ZSM-5.  All the three catalysts showed comparable
catalytic activity for MDHA runs at 6500C. Mo/SZ showed higher
selectivity to benzene (Figure 1), which was comparable to that of Mo/SH. In
comparison to these two solid acids, Mo/ZSM-5 was not highly selective towards
benzene at 6500C. This may be due to a higher number of stable acid
sites for SZ and SH based Mo catalysts in comparison to that of ZSM-5 (Table 1).
Deactivation was observed for all the three catalysts with time. This can be
primarily attributed to carbon formation at catalytic surfaces, which was later
confirmed with subsequent TPO analysis. 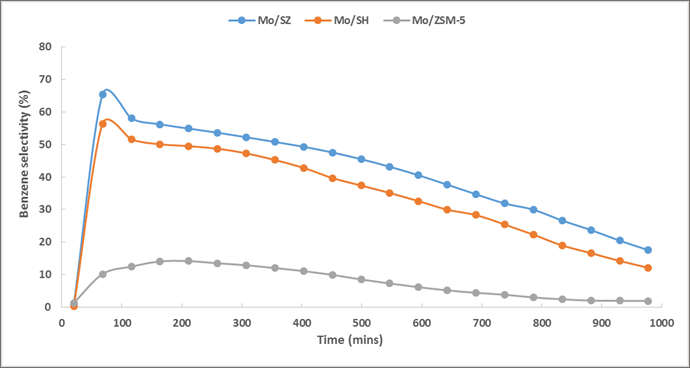 Preview Presentation:
Presenter(s):
Ashraf Abedin
Srikar Bhattar
Francis Bhattar
Swarom Buth
Audrey Buth
James J. Cui
Daan Cui
Srikar De Curtis
Francis De Curtis
Swarom Kanitkar
Audrey Kanitkar
James J. Spivey
Daan Spivey
Once the content has been viewed and you have attested to it, you will be able to download and print a certificate for PDH credits. If you have already viewed this content, please click here to login.

Application of Natural Zeolites As Support in Low-Temperature Fischer-Tropsch Synthesis
In the Fischer-Tropsch (FT) synthesis, CO and H2 (synthesis gas) are converted into plethora of hydrocarbons mainly paraffins and olefins and these can be...
Can Transient Data Help to Speed up Kinetic Model Construction in Hydroprocessing?
INTRODUCTION Kinetic model is a powerful tool for the adequate design and simulation of chemical processes. It is usually developed based on the steady-state...