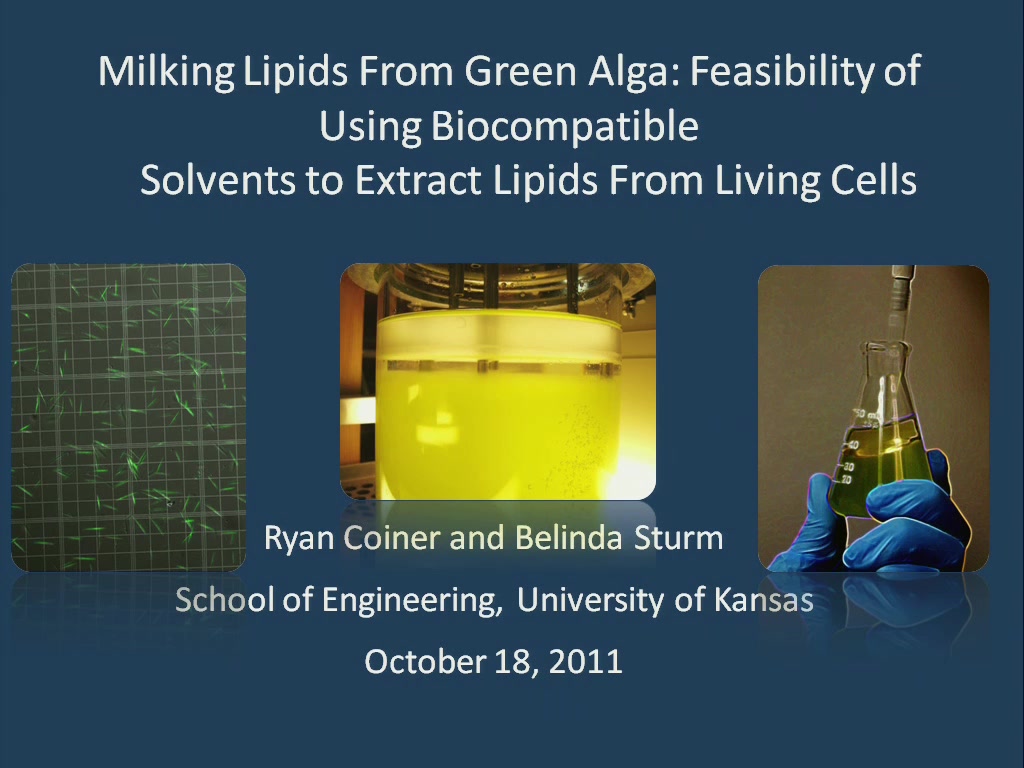 A key hurdle in realizing commercial-scale production of biodiesel from cultured algae is efficient harvesting/dewatering of algal cells. In order to produce a gallon of biodiesel from algae, thousands of gallons of water must be processed, even when algal biomass is grown in relatively concentrated suspensions. For example, a recent study1 using an outdoor raceway pond grew algae at 2.8 g/L (11% lipid content), which would require that at least ~3,000 gal of water be processed to produce 1 gallon of biodiesel.

A proposed alternative to growth and subsequent dewatering methods is milking of cells: a process that continually extracts lipids without sacrificing the cells. The method combines growth and extraction by contacting cells with a biocompatible solvent. Because cells can be maintained in the stationary growth phase with balanced growth under nutrient limitation, it is hypothesized that the supply of essential compounds for photosynthesis (CO2, H2O, and light) would be directed more toward excess carbon storage in the form of lipids rather than new cellular growth. Ideally, external nutrients, nitrogen and phosphorus, would be internally recycled during balanced growth, thus avoiding the need for expensive fertilizers to be added. Previous studies2,3 have used n-dodecane as a biocompatible solvent for b-carotene extraction from the alga Dunaliella salina. Our work tests the feasibility of this solvent for milking lipids from two green alga strains - Ankistrodesmus falcatus and Chlorella klebsiella.

Batch studies were performed to identify biocompatible solvents for algae, which also facilitate extraction of intercellular compounds. Small culture volumes (90 mL in triplicate) were continuously mixed with 12% (v/v) of n-dodecane for 4 days. Cell viability was assessed each day by growth rate determinations and total and dead cell counts. Ankistrodesmus maintained a population of live cells (the difference between total and dead cells) during exposure to solvent. Mean growth rates in Chlorella remained positive after solvent exposure. These results indicated that n-dodecane was biocompatible with both alga strains for the duration of the batch experiments.

More recently, bioreactor experiments are being performed during which the growth of cells and continuous production of lipids are being monitored in four 2-L bioreactors. Each bioreactor has an increasing rate of contact between the algal suspension and dodecane phase through a static mixer external to the reactor volume. Nitrogen-limited cultures were provided CO2, light, and distilled make-up water (from evaporation); no additional nutrients were provided. Results will be presented for a series of experiments of four-week duration highlighting (1) the ongoing viability of cells when exposed to solvent; (2) the retention and recycling of nutrients in the algal suspension; and (3) extraction of lipids to the solvent phase.

Preview Presentation:
Presenter(s):
Ryan Coiner
Once the content has been viewed and you have attested to it, you will be able to download and print a certificate for PDH credits. If you have already viewed this content, please click here to login.

Rules of Thumb for Reactor Design and Process Conditions for Thermochemical Treatment of Chromated Copper Arsenate (CCA) Treated Wood Waste
Lab-scale pyrolysis experiments have been performed to gain insight in the mechanisms influencing the metal behavior during carbonization of chromated copper...
Non-Thermal Plasma Reforming of Refractory Tars and Oils Generated by Biomass Gasification
One of the barriers to wider use of many kinds of biomass is the fact that they generate refractory tars and oils when gasified. These compounds cause...