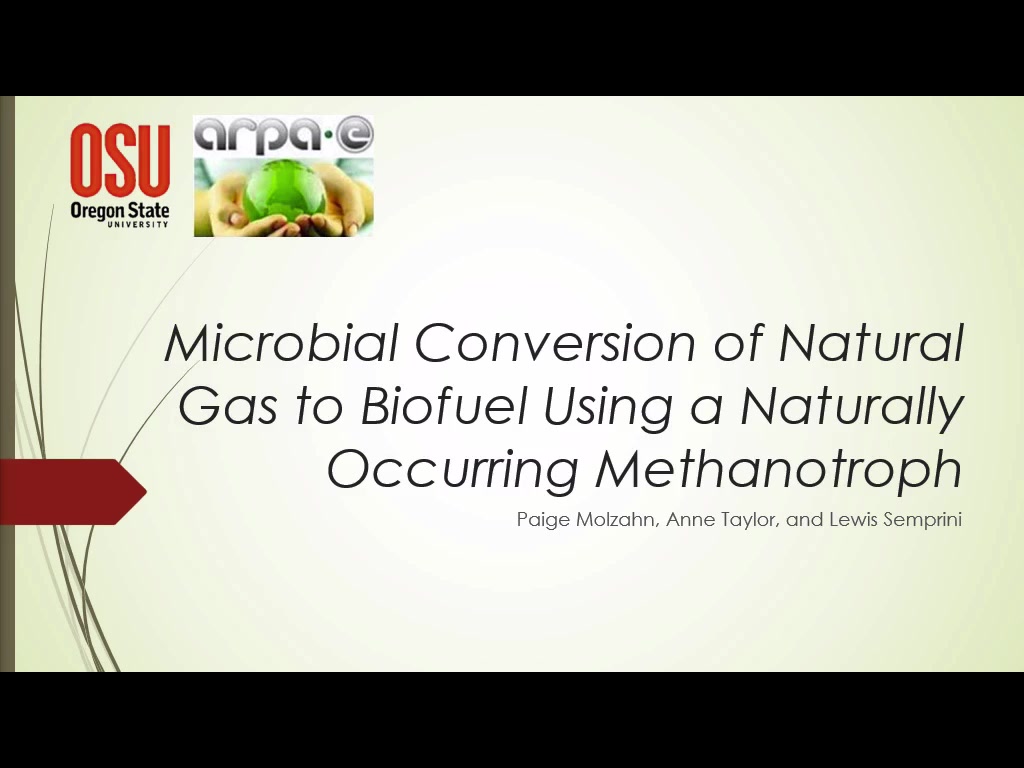 Methane, the second most prominent greenhouse gas, comes from multiple sources including the production of and refining of petroleum, domestic livestock, and landfills, and accounts for approximately 9% of greenhouse gas emissions in the United States according to the EPA.[1] This research focuses on the conversion of methane to methanol, which can be used in the process of biofuel production. The bacterium Methylosinus trichosporium OB3b, a naturally occurring methanotroph, is being evaluated to promote this conversion.

M. trichosporium OB3b cells, when immobilized in an alginate gel solution, maintain their metabolic activity. This technique was used to immobilize the cells in alginate beads and in a thin film to investigate the kinetic properties of the cells in various reactor settings. The alginate beads were placed in a packed column with liquid up-flow capabilities for long term experiments to determine the viability of the culture. Immobilizing the culture in alginate allows it to be easily used and evaluated in a packed bed column, while maintaining mass transfer properties. A methane and oxygen saturated solution was passed through the packed column where methane was oxidized to methanol by the methane monooxygenase (MMO) enzyme. To stop the further metabolism of methanol, cyclopropanol was used to inhibit the methanol dehydrogenase (MDH) enzyme, resulting in methanol accumulation. Long and short inhibition cycles have been evaluated at hydraulic residence times of 5-10 minutes with the overall goal of long term methanol production. Methanol concentrations of 0.1 mmol/L have been obtained. The culture has sustained lower levels of activity in the packed column for up to two weeks, through cycles of inhibition and methanol accumulation, which supports long term methanol production capabilities.

For the further investigation of the M. trichosporium OB3b activity, immobilization techniques and inhibition processes within the alginate gel beads are being analyzed using a microelectrode oxygen probe. The cells are also being immobilized in a thin alginate film on a flat surface metal slide. The alginate film is approximately 1 mm thick and contains a cell concentration of around 10 g/L. This slide is placed in a laminar flow bath with a media solution flowing over the stationary film. A dissolved oxygen microelectrode (10 µm diameter) is being used to evaluate the oxygen profile in the boundary layer above the film and 500 µm into the film.  Estimates of the flux of dissolved oxygen (DO) into the film will be used to calculate methane and methanol uptake within the film. This process was repeated with concentrations of 1 and 10 ppm methanol in the laminar flow bath. The profiles are being created and evaluated for the various concentrations of methanol. The immobilized cells on the slides are also being inhibited with cyclopropanol to evaluate the inhibited oxygen uptake for comparisons. A modified system was created in batch mode with a thick layer of alginate beads with immobilized OB3b. A DO profile was measured with no added substrate and then methanol was added at 1 ppm and the process was repeated in triplicates.

Future work includes further analysis of the inhibition process using cyclopropanol, the immobilization techniques, their effects on MMO and MDH enzyme activity, and the oxygen and pH changes in a thin film system. These results are being applied to the design of a thin film reactor currently in preliminary stages of investigation for long term, high rate methanol production.

Preview Presentation:
Presenter(s):
Paige Molzahn
Once the content has been viewed and you have attested to it, you will be able to download and print a certificate for PDH credits. If you have already viewed this content, please click here to login.

Biofuels: Metrics and Challenges
The webinar will cover leading candidates for both solid and liquid biofuels. The criteria for evaluating these fuels in a combined technical, economic, social...
Sustainably Produced Sugars From Biomass: The Key to Commercialization
Novozymes has launched the first commercially viable product for conversion of complex biomass to fermentable sugars. Continued enzyme improvement and...