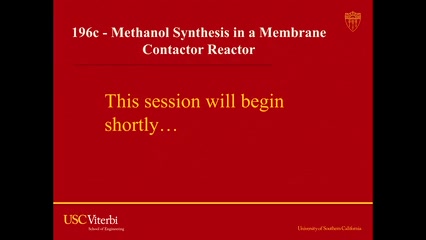 Methanol (MeOH) finds broad use as a transportation fuel and as an important raw material used in the production of other fuels and chemicals. There are several commercial methanol synthesis (MeS) processes1,2, but they are all challenged by low per-pass conversion that necessitates the recycling of the unreacted syngas. This is especially problematic for MeOH production from renewable biomass, where the use of oxygen-blown gasifiers is not economic, and the available syngas has a large nitrogen content. One way to overcome the thermodynamic limitations of MeS, and thus increase the per-pass conversion is to utilize a membrane contactor reactor (MCR). In this study, a novel high-pressure MCR is used, in which a membrane with the desired characteristics serves as an interface contactor between the MeS environment in the shell-side and a sweep liquid flow in the permeate-side. Two different sweep liquids have been employed in the study: A high boiling point petroleum-derived solvent3 tetraethylene glycol dimethyl ether (TGDE) and an ionic liquid (IL) 1-Ethyl-3-methylimidazolium tetrafluoroborate ([Emim][BF4]). The choice of TGDE and the IL as sweep liquids is because MeOH has high solubility in both of them, while the permanent gases like H2 and CO have negligible solubility. Compared to TGDE, the IL has higher decomposition temperature (400 â°C), which implies less demanding downstream processing for MeOH recovery; its lower vapor pressure means lower solvent loss, and its higher thermal capacity affords a broader range of MeS operating conditions and more efficient thermal management. TGDE, on the other hand, is at present more readily available and less costly In this study, MeS is studied in a MCR using IL as the sweep liquid and the results are compared with the MCR system employing TGDE. The data are used for validating a model which is then used for process scale-up and technoeconomic analysis (TEA).

The experimental set-up is described elsewhere3. It consists of the syngas delivery system, the MCR, the sweep liquid delivery system, and the analysis section using GC. A mesoporous alumina membranes, whose surface is rendered hydrophobic via an appropriate modifying agent, is installed in the MCR. During operation, the syngas is fed into the shell-side where it contacts under high pressure/temperature the MeS Cu-ZnO-Al2O3 catalyst to convert into MeOH. The sweep liquid is pumped through the membrane tube-side to remove the produced MeOH, and help increase the MeS conversion/yield. Experiments were conducted in a broad range of pressures and temperatures, sweep liquid flow rates and for two different sweep liquids, TGDE and IL. The lab-scale system operates also as a packed-bed reactor (PBR) when the inlet and outlet of the membrane tube-side are closed.

In this project, we studied the performance of the MCR under different pressures, sweep liquid flow rates and syngas feed compositions and compared it with the PBR under the same conditions. Figure 1 shows the effect of sweep liquid flow rate and reactor shell-side pressure on the carbon conversion at a temperature of 220 oC, and at a fixed value of W/F (catalyst weight/total molar flow rate) = 170 kg*s/mol with a syngas with SN = (FH2- FCO2)/( FCO + FCO2))=1.96 and CF= FCO/(FCO+ FCO2))=0.625. As expected, the reactor conversion increases with increasing sweep liquid flow rate, with all MCR conversions exceeding the thermodynamic values. This is because higher sweep liquid flow rate helps remove a larger amount of MeOH from the reaction zone. The IL shows a higher conversion rate, likely related to the higher solubility of MeOH in IL compared to TGDE. The MCR exhibits conversions higher than the PBR. MCR and PBR conversions both increase with increasing pressure, since MeS is thermodynamically favored at higher pressures. An added reason for the increase in MCR conversion with pressure, is because a higher amount of MeOH transports through the membrane and is removed by the sweep liquid, thus shifting the equilibrium towards the MeOH generation side. For the whole range of pressures studied, the IL attains higher conversions than the TGDE, which relates to its higher MeOH solubility. Constrains with the size of the lab-scale system limit the gains in conversion afforded by the MCR. Modeling studies, however, indicate that conversions >90% are readily attainable. TEA indicates that such conversions would allow the MCR process to operate on biomass-derived syngas in an one-pass configuration without recycle of unreacted syngas needed.

In this study a high-pressure MCR was employed to carry-out the MeS reaction. MCR performance was investigated under a variety of experimental conditions with the results revealing improved carbon conversions compared to the conventional PBR. 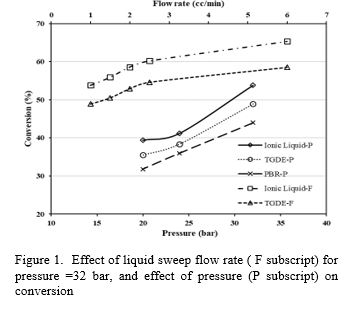 Preview Presentation:
Presenter(s):
Xinshun Liu
Theodore T. Tsotsis
Fatemeh Sadat Zebarjad
Once the content has been viewed and you have attested to it, you will be able to download and print a certificate for PDH credits. If you have already viewed this content, please click here to login.

Towards Cost-Effective Downstream Processes for the Purification of Therapeutic Viruses
Viruses are an important new class of biotherapeutics that have been gaining significant interest for their applications as vectors in gene therapy and...
Division Plenary Part 1: Major Separations Challenge
Organic liquids are ubiquitous in chemical-science-based industries, which range in scale from refining to pharmaceutical production. It is generally accepted...